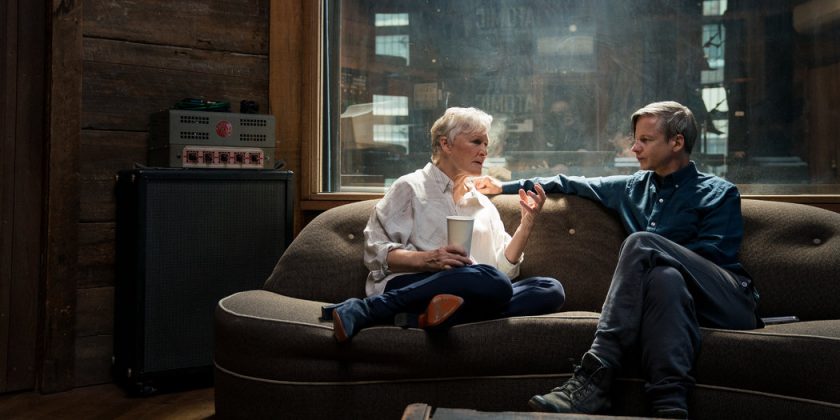 Behind the glass window of a Midtown Manhattan recording studio, Patti LuPone, summery in a short white dress, swayed to the syncopated beat. “A kiss can be bliss when it spans the abyss,” she sang. Then she began to scat: “Zoowa zoop zooza zooway.”

“Too free?” she asked as she finished the take.

It was an early afternoon last July and LuPone had come to record an episode of “Anthem: Homunculus,” the six-hour, 10-episode, 31-song original musical podcast written by John Cameron Mitchell and Bryan Weller and directed by Mr. Mitchell, that begins streaming on the Luminary platform April 23. The start of a new anthology series, it is not the first podcast musical to be released. And though it contains a love ballad from a brain tumor to its host, it may not even be the strangest. But it is probably the most ambitious and, with a cast that includes LuPone, Glenn Close, Cynthia Erivo, Marion Cotillard and Laurie Anderson (as the tumor), certainly the starriest. Powered by grief and an elaborate soundscape, it is a heartbreaker of a rock opera shot straight to your cochlea.

If it works, it could attract other Broadway writers, expanding the way a musical can be imagined and disseminated. And no one has to worry about set changes.

“Homunculus” began to grow, benignly, in 2011 when Mitchell DJ-ed a set at Mississippi Studios, a Portland, Ore., club. He and Weller, then the night manager, met at the after-party, skedaddled to Voodoo Doughnut and slept in a park, snuggled together. “It was like I’d found my soul mate,” Mitchell said last November, sitting next to Weller at a theater district cafe. “One of my soul mates.”

They began to work together, with Weller writing music for Mitchell’s movie “How To Talk to Girls at Parties.” And in February of 2016, Weller dared him to write 20 songs in 12 hours. A few of those songs now appear in the podcast.

Mitchell originally conceived “Homunculus” as the long-rumored sequel to “Hedwig and the Angry Inch,” his ecstatic gender-warping, genre-bending 1998 musical that later became a movie. The story of a transgender East German singer, seduced, abandoned and stranded in Kansas, who finds herself through rock ’n’ roll, it ends ambiguously, but not unhappily.

He imagined that by now Hedwig was probably a nonbinary college professor, teaching German philosophy and rock ’n’ roll history at some liberal arts college, an imagined future he didn’t want to disrupt. Building “Homunculus” around Hedwig “was like ramming a round piece into a square hole,” Mitchell said. 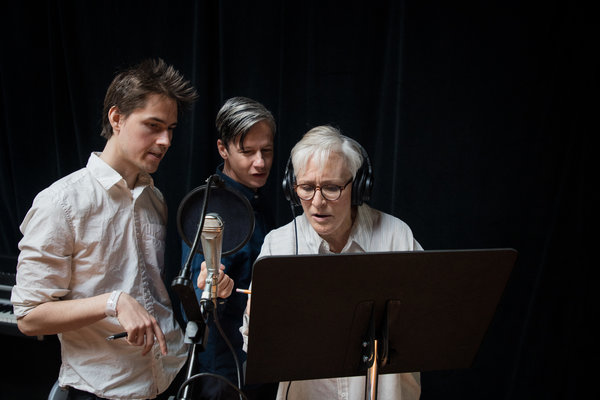 The project metastasized. Its new protagonist, Ceann (voiced by Mitchell), is the man Mitchell might have become if he had never left Junction City, Kan. (Mitchell described Ceann as “a dangerous liberal shut-in,” adding, “But doesn’t everybody feel like a dangerous shut-in lately?”) Still, there are Hedwig shout-outs: Ceann lives in the vintage double-wide Hedwig once rented. “The bathtub still coughs up blond wig hairs,” he says in the first episode. Because Ceann has a brain tumor — another angry inch? — and no insurance, he creates an online telethon to raise money for his treatment, singing his life story to anyone who clicks.

Like Ceann’s telethon, “Homunculus” addresses private pain in a public medium, enfolding, in ways that are more and less fictional, the deaths of Mitchell’s younger brother, former boyfriend and father, as well as his mother’s Alzheimer’s disease. “The whole piece is me dealing with loss,” he said. When a script had been drafted, Mitchell realized he didn’t want to put it onstage. “At some point, I was like, ‘How do I do this eight shows a week?’”

He figured it might work as a TV series. Hollywood executives disagreed. (“I could always see them glazing over, going, ‘There’s no way this fits into our metrics,’” Mitchell said.) But Topic, the entertainment arm of First Look Media, had been looking to finance a new narrative podcast, and gravitated to the pitch. “The concept would be a magnet for the kind of talent that transcends what’s been done in podcasts to date,” Michael Bloom, the C.E.O. of Topic and First Look Media, said in an email.

So Mitchell got to work again, converting visual elements into aural ones — writing lines in place of reaction shots, making soundscapes do the work of sets.

He also composed a casting wish list. Most of those wishes were granted. “I would walk with John to the ends of the earth,” LuPone wrote in an email. “In this case, I only had to stand in front of a mic in my slippers.” (She plays Ceann’s aunt, a nun who dies of AIDS-related complications and also sings a fast jazz number.)

“Yes! Blow that mic!” Mitchell said when Close, with her dog, Pip, at her feet, recorded the song “Dissolve Me” last spring.

The audio was recorded over seven weeks last spring and summer. The editing and mixing has taken nearly a year.

Last fall I sat with Mitchell, Weller and Brian Kates, one of the editors, as they worked through Close’s episode in Kates’s heavily carpeted home studio in Manhattan. Each word, each note, appeared in two to six takes and every episode was being built microsecond by microsecond. “The assembly can depress and crush,” said Mitchell.

Kates played me what sounded like a seamless 12 seconds. It contained 14 cuts. “Because there’s no picture to sync, you can cut as often as you want,” he said.

Most episodes include not only the telethon, but also flashbacks and hallucinatory episodes in which Ceann visits other planets. The sound mix has to negotiate these various levels of reality, without resorting to harps, say, to signal reverie. “I’m not really into that,” Weller said after the edit session, “it’s so cliché.” He’d been working instead with the sound of bagpipes lifted from a YouTube video and run backward.

This aural complexity demands a certain kind of listening. Mitchell has been told that because people often consume podcasts while multitasking, characters should restate important points. “I refuse to do that,” he said. “I want this to be listened to the way you would listen to — ”

“An old radio show in the ’30s?” Weller suggested.

“An old radio show in the ’30s,” Mitchell agreed. Then he walked it back slightly. People could listen while driving, he said, or while taking the train. “But maybe not when you’re on the StairMaster or when you’re emailing, and some people won’t be up for that right away,” he said. But he thought it would catch on eventually. “We can’t wait for our fan art,” he said.

This spring, a few weeks before the podcast’s release, I spoke to Mitchell once more. The mixing had finished — “I’m like, I have no micromanaging to do today,” he said — and the trauma of the edit suite had declined. When he discussed the project, he sounded like a man remembering a love affair, only the good parts. “I had a blast,” he said. Though the cast was never all crowded into the same studio, “It felt like we were putting on a show together,” he said. The show will have an original cast recording.

He doesn’t plan to write another podcast, but he hopes to produce more seasons of “Anthem,” as an anthology, with new characters and new stories. “I want to bring storytellers to the audio form,” he said, which is cheaper and gnarlier than more traditional models, more egalitarian. His ambition: to move musicals away from Broadway and into headphones and earbuds and tinny computer speakers.

“In the future,” Mitchell said, riffing on Andy Warhol, “everyone will have a podcast, because they’re very easy to make. And less annoying than a YouTube channel.”