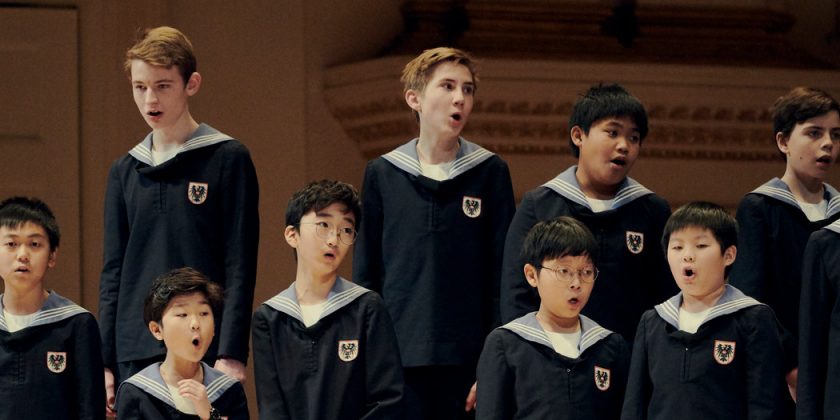 Christmas is like, well, Christmas for the boys’ choirs of the world.

For many in Britain, Christmas Eve this year meant tuning in to a broadcast of a lone boy chorister singing “Once in Royal David’s City” in a piercing voice, before being joined by the other boys and men of the choir of King’s College, Cambridge, which traces its history to 1441.

In Austria, the Vienna Boys Choir, which is nearly as old, sang Haydn on Christmas morning in the Imperial Chapel. Also on Tuesday morning, in Germany, the St. Thomas Boys Choir of Leipzig, which dates back to 1212, sang the music of Bach, its former leader. And at a younger St. Thomas Church, on Fifth Avenue in New York, an esteemed choir of men and boys sang a Festival of Nine Lessons and Carols to a jam-packed service on Christmas Eve.

Which leads to a question: Where were the girls?

That has reverberated more than usual this year, ever since a British soprano, Lesley Garrett, wrote an article this month calling on King’s College to include girls in its choir.

“Every Christmas I sit down to watch Carols from Kings, which is broadcast around the world, and every year I wonder where the girls are,” Ms. Garrett said in a telephone interview. “So this year I decided to pose the question and see what would happen. And we got this great outpouring of passionate opinion.”

Her broadside inspired a sometimes heated debate about gender inequality; the value of tradition; the particular vocal timbres of girls and prepubescent boys; the different ways their voices develop as they grow; and the practical difficulties of persuading 21st-century boys to step away from their screens and sports to agree to sing high treble lines in choirs.

Some of the objections to Ms. Garrett’s call to admit girls were musical: The best boys’ choirs are cherished for a particular sound, sometimes described as pure, tremulous or ethereal. But how much of it is nature — is there a timbre unique to boys just before their voices change? — and how much comes from nurture and training is much debated. Some research, done with listening tests of recordings, has called into question how well listeners can tell boys’ and girls’ voices apart.

David Hill — who was the director of music at Winchester Cathedral in Britain when it introduced a girls’ choir in the late 1990s — cited the special sound of boys in advocating the preservation of the tradition, saying that there should still be room for separate boys’, girls’ and mixed choirs.

“Removing the boys’ and men tradition would be removing something which is unique in the choral sound world and for which this country is revered,” Mr. Hill, now the music director of the Bach Choir, wrote in a statement.

That sound is associated with early music; ensembles that embrace historically informed performance practice often use boy singers to evoke the time the music was written, just as they use period instruments. But it has also appealed to more recent composers, including Benjamin Britten and Leonard Bernstein, both of whom wrote music specifically for boys.

Of course, boys’ choirs date from a time when girls could not even attend school, let alone join the clergy. And many are belatedly changing. Racial and ethnic diversity has increased in leading choirs. And many British choirs that were once male preserves now include girls and women in varying degrees. Salisbury Cathedral helped pave the way in 1991 when it formed a girls’ choir; these days, its weekly services are evenly divided between girl and boy choristers.

Last year St. Paul’s Cathedral in London appointed its first woman as an adult member of its choir. In the United States, a very different kind of a cappella group, the Whiffenpoofs at Yale University, admitted its first woman earlier this year.

Some chorus masters worry about the practical implications of ending all-boy choirs, citing the reluctance of many tween boys to sing with girls; the difficulty of persuading boys to join choirs at all; and the fact that boys typically peak vocally a few years before girls do.

Gerald Wirth, the president and artistic director of the Vienna Boys Choir, said that around the world, he had seen that elementary schoolboys are happy to sing with girls, as are older teenage boys. But he said that boys around middle school age — when they are at their vocal peak, just before their voices change — are often reluctant to.

“If we don’t have a specific boys’ group, we lose the boys at this age, except for a few,” Mr. Wirth said in an interview in New York, where the choir sang at Carnegie Hall this month. (The school of the Vienna Boys Choir is now coed, but only the boys tour.)

Of course, there are plenty of thriving coed choirs, too. Francisco J. Núñez, who founded one, the Young People’s Chorus of New York City, three decades ago, recalled being asked a pointed question in its early days by the composer Ned Rorem: “He once asked me, straight up, ‘Why do you have girls singing?’”

The answer? “Because they sing just as well. And they’re committed; they come. And there are many more that want to sing. So why should I keep closing the doors on someone that wants to sing?”

Mr. Núñez said that he had had problems finding boys to join “since the beginning of time.” But by recruiting many at young ages, the chorus has been able to retain more, and is now around 45 percent boys.

One of the world’s few remaining all-boy choir schools is in New York City: St. Thomas Choir School, which was founded in 1919, and which trains the boys who sing with the acclaimed St. Thomas Choir of Men and Boys.

The church’s director of music, Daniel Hyde, who will leave to become the next director at King’s College, Cambridge, declined a request for an interview to discuss the all-boy tradition. “Musically, Saint Thomas follows an Anglican tradition which is centuries-old,” the church said in a statement, “and we are committed to maintaining the unique sound that our parishioners and concert audiences have come to know and love.” The church noted that it often features female soloists at performances, and said that it strongly believes “in gender equality and equal opportunities,” citing the school’s summer residential program for girls, which it said has been growing.

Ms. Garrett, the soprano, said that she was most concerned not about whether boys and girls sing together, but whether girls have the same opportunities as boys: the access to scholarships to the great choir schools, which provide fine educations; or the same chances to sing on important, high-profile occasions such as broadcasts and tours.

“I’m not saying we should abolish boys’ choirs,” she said. “I just think we need to work harder to give girls the parity of opportunity. In other words, equality.”