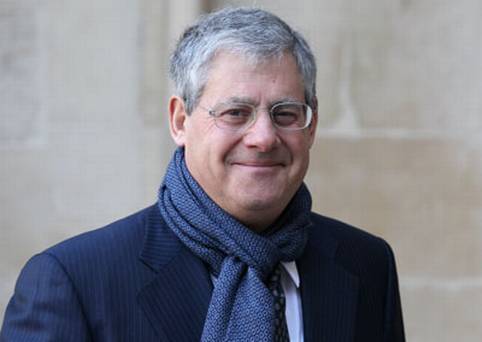 Cameron Mackintosh is reminiscing about the ‘wild west’ of Dublin in the early 70s when Irish producer Noel Pearson dominated the stage and musicals scene and Mackintosh was nipping back and forth from London to the Gaiety and the Olympia. “Oh it was fun, it was fun!” he beams.

Almost five decades later he’s back in the capital again for the launch night of Les Misérables at the Bord Gais Energy Theatre.  He doesn’t need to sell it – it has been sold out for weeks.  In fact, it’s the biggest advance sale of any show of his ever in the UK and Ireland.

“Normally with Dublin people they wait until about two weeks before the show comes and finally think, ‘oh, I’ll get a ticket now!’ and then you get this flood,” he says, chuckling at our laissez-faire attitude.  This show, however, has been different.  “We’ve done incredibly well with my shows here before but we’ve never seen this and I don’t think the theatre has either.”

Meath man Killian Donnelly (‘darling Killian’) is playing the lead, Jean Valjean, and Mackintosh says, “Ever since I clapped eyes on him he was special,” before giving a rundown of the 34-year-old star’s career up to his impressive turns in The Commitments and Kinky Boots.  “He’s just burst on to our scene and done a lot of major stuff.  I always wanted him to play Jean Valjean but I had to wait until he was old enough.”

It has been ten years since the legendary producer has toured the new version of Les Mis here and more than three decades since he produced the original musical incarnation of Victor Hugo’s classic novel.  Back in 1985 it had a bit of a difficult start at the Barbican in London.

“Of course it famously got a fairly rough ride from the first early British critics, not the international critics, but the British critics, with one or two exceptions,” says Mackintosh.  “But for the public it didn’t make the slightest bit of difference.  When I moved it to the Palace Theatre – I thought I have to have this role of the dice – we still didn’t have an advance on the show as it was only ten weeks after the original opening.  The public just started coming in.  We didn’t review the show, because we daren’t, because they didn’t like it enough the first time.  But within four weeks even the matinee was sold out.  It really is the people’s musical.”

Les Mis is still playing out 95 per cent capacity in London after more than three decades. It is beloved of generations and continues to be discovered anew.  “It’s hugely popular with everyone from eight year olds up, they’re doing school versions of Les Mis all over the world – it gets into their blood,” he says.

The Hollywood movie version, starring Hugh Jackman, Russell Crowe, Anne Hathaway, and Eddie Redmayne, released in 2013, furthering its reach.  Mackintosh produced, of course, and admits the big screen adaptations “undoubtedly help” to get bums on seats at the theatre.  He’s expecting a surge in ticket sales for Mary Poppins (which he currently has running in five countries) in the wake of Mary Poppins Returns, Disney’s reimagining starring Emily Blunt, which opens in cinemas on Friday.

There may well be a similar surge in interest in Les Mis following the BBC’s upcoming six-part series based on Hugo’s original novel.  Written by Andrew Davies (War and Peace, Pride and Prejudice, House of Cards) it boasts a cast including Olivia Colman, Dominic West, Lily Collins, Josh O’Connor and David Oyelowo.  It does not, however, boast any songs.

“It’s a lovely coincidence,” says Mackintosh of the series’ arrival.  “I’m delighted.”  His delight, one suspects, does not perhaps relate to the production itself as much as how he expects it may be received by an audience familiar with the musical.

“Now, I’m going to show you what the real Les Miserables is, with no songs!” he says wide-eyed.  “So, I’ve been laughing, because every time you hear an actor going on the radio to plug it the interviewer says, ‘So, there’s no singing in it?  You’re not going to be singing those wonderful songs?’ and they’re all getting rather, ‘Oh no, this is serious’… ‘So, there’s no nice songs then?’”  He guffaws with laughter.

Indeed, what is Les Mis without ‘I Dreamed a Dream’ or ‘Do You Hear the People Sing?’?  Mackintosh references the stage and film versions of Pygmalion.  “You do miss those great songs from My Fair Lady,” he says, adding, “And the same with Oliver.  [David Lean] actually took that script and adapted that script and not the novel so when you’re watching it you’re expecting, yes, we’re going to get the great song!  But no song.  No song!  So, I’m hoping Andrew Davies is going to have to sit there po-faced as the audience want to sing along!”

Will he watch the series?  “Oh, I’ll watch it a bit,” he says dismissively, before taking one more swipe, “I’ve just seen the trailer last week and it did look remarkably like a lighter weight version of the trailer for the Les Mis film.  It’s fun.  It’s like a touring version of our original film.”

Mackintosh has produced more musicals than anyone in history.  He now owns Music Theatre International, the world’s leading library of musicals, which has, he says, “about two thirds of all the famous musicals you’ve ever heard of”.  He’s 72 years old and a billionaire.  He looks twenty years younger and puts it down to his mother, who will turn 100 in January.  He scrolls through photos of her ‘stealing the show’ at his niece’s recent wedding in Marrakesh.  She looks a sprightly 60.  She was supposed to fly to Dublin for the opening night as Cameron’s nephew has a role, but she couldn’t make it.  I assume she was ill.  “Oh no, she’s flown to the south of France so don’t feel too sorry for her!” he laughs.  His response to the retirement question that follows is not surprising given he is the son of an almost-centenarian who commands the microphone at weddings and lives the life of a jet-setter.

“It doesn’t interest me,” he says plainly.  “To be honest, selfishly, the company’s grown so much. I thought, I’ll just be a producer. That’s all I wanted to be and of course the law of averages if you’re lucky you get 20 or 30 years and then it slowly declines, and that was one of the reasons why I bought a theatre.  Someone said, “Oh it’ll give you something to do when you’re not producing and I thought, yes that’s true’.  So I did that but little did I know, these shows, which are incredible classics, they just have a life.  When you go in a theatre, just to hear the audience [of Les Mis] 35 years on going, ‘Woah!’ you think you’re so bloody lucky to be on this earth and be part of creating something that takes the public imagination generation after generation.  I would never do that [retire].”

Not only will he not retire, he went and bought a further seven old London theatres, all of which he has refurbished (and which require constant TLC).  Then there’s Music Theatre International and all that that entails.  However, while retirement is not an option, he is mindful of protecting his life’s work and his legacy.

“It’s the future, and what I am now spending my time doing is finding new generations of talent who like what I do and when I’m no longer here look after it,” he says.  “I’ve got fantastic people.  That’s how I’m able to do as many shows as I am.  I’ve got at any one time 30-40 major productions all over the world, plus all the subsidiary stuff.  It’s a lot to do.”

With so many productions on the go across the globe, you might expect his hands on involvement to be minimal, but that’s not how he operates.  “I’m a very good delegator as long as they do exactly what I want,” he roars with laughter.  These days he doesn’t tend to do new shows very often, instead trusting his teams around the world to come to him when they need him on the regular productions.  That said, if he is creating something new and must be around, his modus operandi is “to be around enough at the beginning that it isn’t an event if I come in.  As I’ve got older and become ‘eminence grizzly’ as I call myself now I don’t want them to freeze up because Cameron’s in to watch.”

One suspects that might happen anyway.  It’s clear he does not hold back when he feels something is not working on a production.  He says he does “try to keep away” until things are up and running and “then I need to come in and immediately smell, that looks right, or this doesn’t work, or that doesn’t work, or something will tell me that how they’re trying to stage it isn’t right.  It’s one of the sixth senses God gave me and I’m good at that.”

“It has come down to the wire a few times, yes.  And sometimes the compromise you make turns out to be genius. I think compromise in the theatre, and accidents in the theatre, can give you some of the greatest moments, because something from leftfield is the solution and it suddenly becomes – it can be a song, it can be the way you stage a scene, the way an actor is doing something – it makes the show, because it wasn’t premeditated.  That’s why I don’t think anybody can tell what show is really going to fly.”

Except for the man himself perhaps.  He mostly stages new versions of established shows and does fewer new projects these days.  They’re risky, and time-consuming and he loves his holidays.  “I have some beautiful homes in Scotland and Somerset and in Malta because I’m half Maltese and I want to enjoy them,” he says.  “I’m in my 70s now and thank God I’m healthy and I’ve worked bloody hard.  I’ve been doing it for over 50 years and I want to keep my enthusiasm.”

However, the main reason he does not have many new shows, he says, is down to collaborators.  He started out with peers and collaborators like Andrew Lloyd Weber, Howard Ashman, Alain Boublil, Claude-Michel Schönberg, and composing duo Styles and Drew, and says that collaborations of that ilk are less likely to happen for him now.  However, he is co-producing the hugely successful American rap and song musical Hamilton with producer Lin-Manuel Miranda because Miranda appreciates the tradition he loves.

“Lin, you can tell, he talks about it a lot, he understands the tradition of musical.  He knows everything about the great classical musicals of the past and he completely embraces their influence and has come up something incredibly original in his own style out of it,” he says.

“You can see he loves Sweeney Todd and he loves Superstar and all of that, so all of that has gone into Hamilton, which is exactly what happened with Andrew Lloyd Weber and myself.  We loved the great Rodgers and Hammerstein.  We loved West Side Story.  We loved those great musicals, we just did our versions.  The best key to the future is the past.”