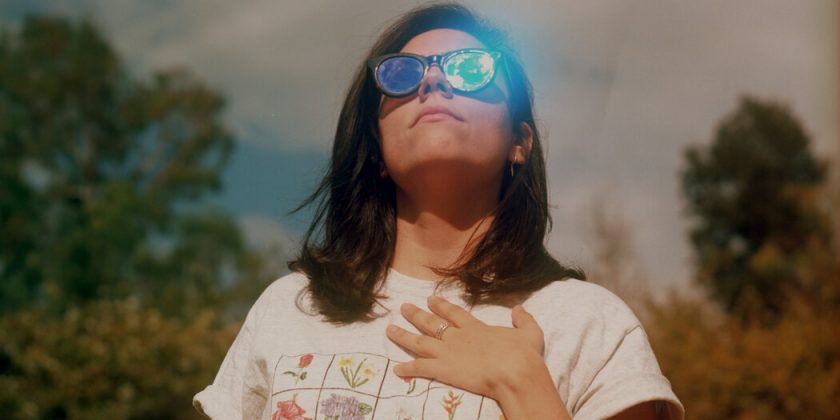 LOS ANGELES — The night before Sarah Tudzin filmed the music video for the first single from her band Illuminati Hotties’ new album, the director Katie Neuhof texted a picture of green, gelatinous glop cooking on her stove. In the middle of the clip for the exuberantly titled “Mmmoooaaaaayaya,” it was to be poured, Nickelodeon-style, onto Tudzin’s head.

“Oh yeah, what’s in it?” Tudzin, the band’s 29-year-old founder and frontperson, replied. “I’m allergic to dairy, by the way!” This was news. An emergency scan of the ingredients in Jell-O vanilla pudding powder, green food dye and applesauce confirmed that the slime was, in fact, lactose free. Then, Tudzin recalled gamely, “I was all set.”

“Mmmoooaaaaayaya” is the second track on Illuminati Hotties’ thrillingly genre-defiant album “Let Me Do One More,” out Friday. Releasing it as the first single, Tudzin said, “I wanted to smack people over the head with something off-kilter.” The song’s verses are a teetering Jenga tower of dissonant guitar stabs and Dada-esque reflections on modern life (“You think I wanna be a part of every self-appointed start-up?”), then the chorus snaps into one of the catchiest hooks you’ve heard in ages — a kind of wordless, subversively goofy primal scream into the void.

“She can make any sound she wants,” the singer-songwriter Lucy Dacus, Tudzin’s friend and former tour mate, said in a phone interview. “She has the full breadth of emotion in her music: You may be coming into a party but then, whoops! You’re feeling things. I like that she never keeps you too long in one state of mind.”

Tudzin, a recording engineer and producer who been releasing music as Illuminati Hotties since 2018, has “invented her own genre,” said the producer Chris Coady, who employed her in his studio for several years. Tudzin’s name for it: “tenderpunk.”

“Let Me Do One More” is a creative leap that embraces new sounds and song forms and seems destined to increase the ranks of her fans (she calls them Little Shredders). Its release on the indie label Hopeless Records also represents a professional triumph. In May 2018, Illuminati Hotties signed with the Tiny Engines label and released its debut album, “Kiss Yr Frenemies.” In 2019, several of the label’s artists accused its leaders of financial mismanagement. Tudzin still owed one more album on her contract, but didn’t want her proudest artistic achievement yet to arrive on the embattled label. So, in a few whirlwind weeks that winter, she wrote and tracked a blistering, 23-minute LP to fulfill her commitment. She classified it as a mixtape, and gave it a cheeky title: “Free I.H.: This Is Not the One You’ve Been Waiting For.”

Musicians have a long, storied history of quickly tossing off albums to get out of restrictive record contracts. Most of these albums are awful. “Free I.H.,” almost by accident, was quite good, summoning both the sugary power-pop hooks of prime-era Weezer and the wild punk-rock eclecticism of the Minutemen. Lyrically, Tudzin has a knack for articulating how hard it can be to form authentic human relationships in a world clotted with the detritus of an increasingly absurd consumer culture. “Let’s smash to a podcast,” she shouts on the mixtape’s first song. “Tomorrow morning we’re crying into a Denny’s Grand Slam.”

Tudzin kicks all these elements up a notch on “Threatening Each Other re: Capitalism,” one of the most affecting songs on “Let Me Do One More.” A slow-burning ballad propelled by crushing guitars, the song strikes a signature balance between humor and pathos.

“I’m always looking for ways to tie the global picture into a personal narrative,” Tudzin explained. “I think that’s what’s helped me connect universally and also connect with other people, person to person.”

Tudzin grew up in the Valley, but Downtown Los Angeles, where we met at a library in August, brings back memories of her teen years going to shows at the nearby all-ages venue the Smell. (We wandered into the library after the nearby bookstore we intended to browse was closed for a film shoot — a modern irony that wouldn’t be out of place in an Illuminati Hotties song.) She took piano and drum lessons from a young age, and was adequately schooled in classical and jazz, but something clicked around age 10 when her drum teacher taught her that she could play along with whatever records she was listening to in her spare time.

“I asked a friend of mine to burn me some CDs, and she lent me some Green Day and some Blink-182,” Tudzin said. “And then it was like, game over.”

After graduating from the rigorous production program at Boston’s Berklee College of Music, Tudzin was dismayed to find that she was expected to cut her teeth as a “runner” — fetching coffee and cleaning toilets into the wee hours — for several years before she would be able to use the technical skills she’d learned in college.

“It was a really bad environment,” she said of her time working at a major-label studio. She quit after six weeks and shopped her résumé all over Los Angeles, eventually hustling her way into an assistant job with the producer Will Wells (the “Hamilton” cast recording was among the projects they worked on) and, later, with her mentor Coady, who was instantly impressed by Tudzin’s chops.

“We were up and running on Day 1 — she already knew ProTools better than I did,” Coady said. In the three years they worked together, “Sarah never made one single mistake,” he said. “I was lucky, because people that good usually don’t stick around for long.”

During that time, Tudzin started Illuminati Hotties as more of an aspiring producer’s calling card than an actual band: “I was like, how do I convince some band that I meet at a show that I’m able to make their record? One of the ways was to make my own record, and be like, ‘This is me going all out.’”

Tudzin was going to just upload “Kiss Yr Frenemies” onto Bandcamp and move on, but Dacus convinced her to “respect your own work enough to give it the breathing space that it deserves,” Dacus said. Which meant sending it out to labels. Tiny Engines offered to put it out. The sudden recognition was a thrill but, in retrospect, Tudzin regrets not reading her contract more carefully — especially the part where she signed away her masters.

If Taylor Swift “can be fooled with all that team around her, imagine a small band who just plays local shows and has never done this before,” Tudzin said in the library cafe as we sipped iced coffees.

One silver lining of Tudzin’s contract debacle is that her new deal has allowed her to create and co-release “Let Me Do One More” on her own imprint, Snack Shack Records. She hopes to sign a roster of indie bands she likes and ensure that they don’t make the same mistakes she did.

In late 2018, the demands of Illuminati Hotties pushed her to “graduate” (Coady’s word) from her role as a studio assistant and engineer, but during the pandemic Tudzin was able to take on remote production jobs and stay afloat a bit more easily than musicians who relied solely on touring. Though any increased attention that “Let Me Do One More” brings will likely make her balancing act a bit more precarious, Tudzin hopes to split her upcoming time as a musician and a producer, as she attempts to make her own little corner of the music industry a more humane place to work. Just as long as she’s still enjoying herself.

“I just want to make it fun for me, and I’m happy to have as many people on board for that as want to be a part of it,” she said. “It definitely makes it more fun, to create the space that I want to be in.”