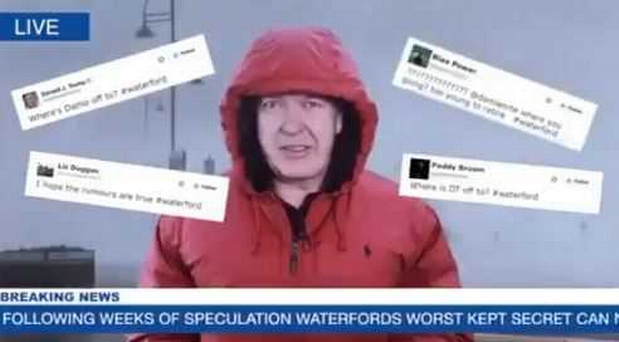 Mr Tiernan made the announcement that he will present the two hour live morning news programme Déise Today on the station in a weather-themed video on Twitter.

“Déise people love to talk and there’s been lots of talk about where I’m off to next,” he says against a stormy backdrop.

“Well, I can exclusively reveal here now that from Monday February 4th I’ll be brewing up a storm on – microphone lads – Déise Today on WLR, so join me every weekday morning from 10am.”

The journalist and broadcaster, who is originally from Wicklow but has been living in Waterford since the 1990s will take over presenting duties from Maria McCann who had been hosting the show since Eamon Keane’s departure last year.

“I am absolutely honoured to be following in the footsteps of the legendary Billy McCarthy who presented the show for 25 years, and more recently, Eamon Keane,” he said.

“I have always been an admirer of ‘Deise Today’ and have long thought that I would love to present this programme. Now that dream is becoming a reality. The show covers a range of topics extremely well. It’s going to be a new challenge for me and ten hours of live broadcasting a week will be both invigorating and exciting!”

Mr Tiernan announced he was leaving RTE after 23 years on January 1, having taken up one of the exit packages as part of the exit scheme which was announced in 2017. He wrote on Twitter, “To Whom It Concerns:  I am leaving RTE. I have been with the organisation 23 years.  Thank you to everyone with whom I have worked, especially my colleagues in the South East.  I will be finishing the end of next week.  Thank you and good luck, Damien.”

Speaking to the Irish Independent last month, Mr Tiernan said, “I obviously thought long and hard about it. RTÉ has been very good to me.”

Mr Tiernan has a BA in English and Philosophy from UCD and a postgraduate diploma in Journalism from Galway.  He began working with RTÉ in 1995, having previously worked at the ‘New Ross Standard’, the ‘Wicklow People’ and the ‘Wexford People’.

Friends and colleagues of Mr Tiernan’s have been wishing him well on social media following the announcement about his new role.