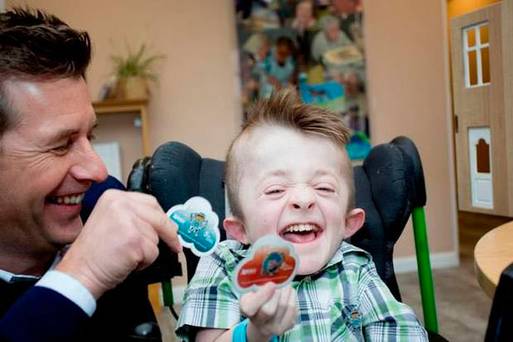 Dermot Bannon has spoken about the impact that Michael Stokes has had on his life.

The ‘Room to Improve’ architect worked with Michael and his foster parents Ann Higgins and Barry McCabe in 2015 on adapting and improving their Malahide home to cater for Michael’s needs.

Unfortunately, Michael, who was 15, died following an accident on May 5 this year.

Speaking to Ryan Tubridy on his RTE Radio 1 show on Tuesday, Dermot spoke about working with the family and the impact that Michael had on him.

“Within five minutes of meeting Michael he completely disarmed you,” he said.  “He had this amazing personality and it became a project about Ann, Barry, and Michael, not Ann and Barry creating a house for somebody who had a disability.

“It was an incredible project to work on.  It’s one that people still talk to me about.”

Speaking about Ann and Barry in the wake of Michael’s tragic death, the presenter and architect said he is still “just devastated for them”.

Dermot revealed that he “was going through some stuff at home” relating to an illness at the time he worked with Michael, and said, “We were struggling with that [and meeting Michael] just put shape onto it.”

“The little things in life made him so happy and he embraced them and that taught me a huge amount.  Don’t sweat the small stuff.”

He described Michael as a “beacon of light” and said he was glad they did the show together.

Dermot revealed that he lost his own father a while ago and said that Christmas is a particularly difficult time of year for those who have lost a beloved family member.

“I think a lot of people going through this maybe think they’re going through it alone.  They’re not. There’s thousands. There’s very few families that aren’t affected by it in some way,” he said.