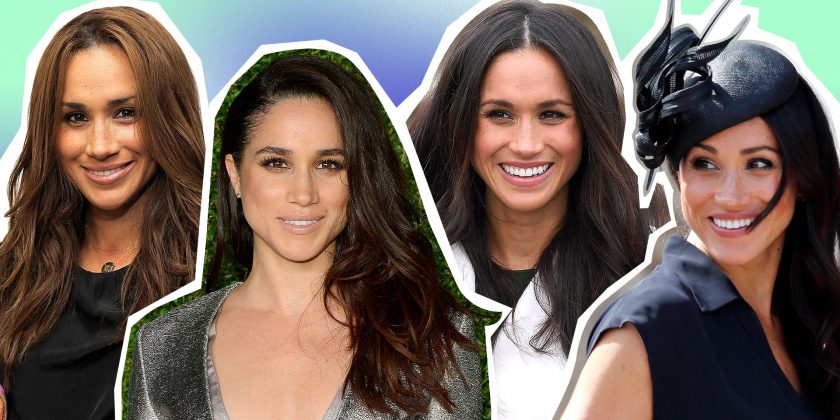 The Duchess of Sussex, Meghan (born Rachel “Meghan” Markle) did not have a predictable or classic rise to British royalty — and the world (including us) is obsessed with knowing everything about her. Over the past year, U.K. Google searches for the duchess were more than double the amount of those for her sister-in-law, Kate Middleton, who became the Duchess of Cambridge in 2011. However intriguing and atypical her life is, the Duchess of Sussex has kept it fairly consistent with her beauty evolution. She has favored a bold eye with a nude or pale-pink lip and blushing cheeks.

Her longtime makeup artist, Daniel Martin, Dior brand ambassador and Honest Beauty creative color consultant, has been working with the new royal since her Suits days and did her famously natural beauty look for the royal wedding, for which Prince Harry, Duke of Sussex thanked Martin repeatedly.

Martin shares with StyleCaster that the makeup process on the morning of the wedding was pretty easy and one of his favorite looks of hers that he’s done. “[There were] no restrictions! I knew what she wanted from the start, so our time together that morning was seamless,” says Martin.

Both the duchess’ and Martin’s lives have grown tremendously and simultaneously in the past couple of years. And so has their professional relationship, which has quickly turned into a friendship. Though glamming a duchess is cool, Martin’s favorite part of doing Meghan’s makeup is the “laughing, catching up on mutual friends and talking about cooking. She has great recipes to share!” he says.

After living in Los Angeles as an actor for most of her career, Meghan was used to attending events and knew when and where to play with her beauty looks. “There’s a time and place to wear a lot of makeup, and she understood that, but in her real life, she keeps it simple,” Martin says.

As the adopter of a fairly simple and sophisticated beauty archive, Meghan has also become more and more comfortable with doing her own makeup according to Martin. And though she mainly stays with her natural and neutral tones, Meghan has become more experimental with her makeup — even daring to wear a dark lip, a bold color Martin previously told People she would never wear. “She’s gotten darker on the eyes and played around with a deeper lip too,” Martin said.

As we continue to shine a spotlight on the royal mom-to-be, we’re sure the world will follow closely, wondering what products she uses (Martin isn’t allowed to reveal those coveted secrets) and how to recreate her hair in a loose bun or soft curls.

Click through to see a beauty evolution of the duchess, from before Suits to her official international tours as a member of the royal family. 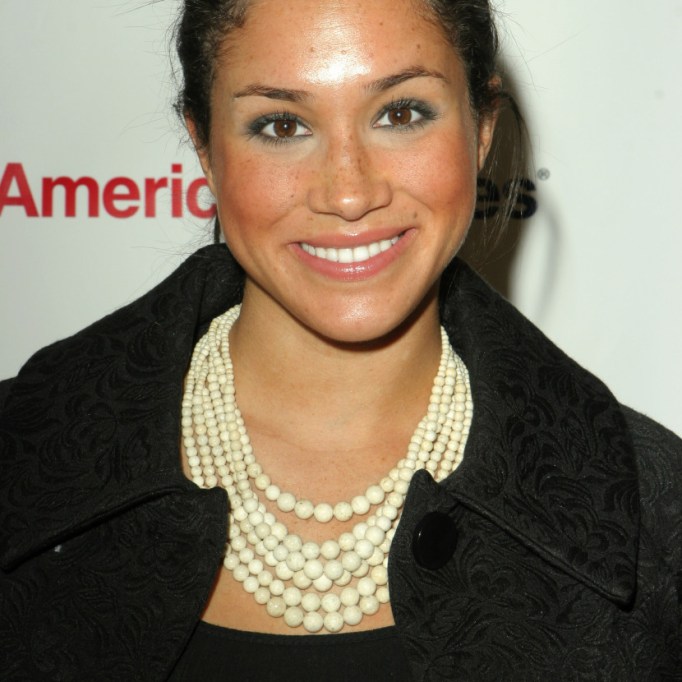 While attending the George Lopez/Great Chefs of LA event for the National Kidney Foundation, Meghan (pre-Suits) appeared a tad sunburnt (the sign of a great vacation — we hope) and wore dark eye makeup paired with a glossed lip.

September 2011: The Launch of the Alexa Chung for Madewell Fall 2011 Collection 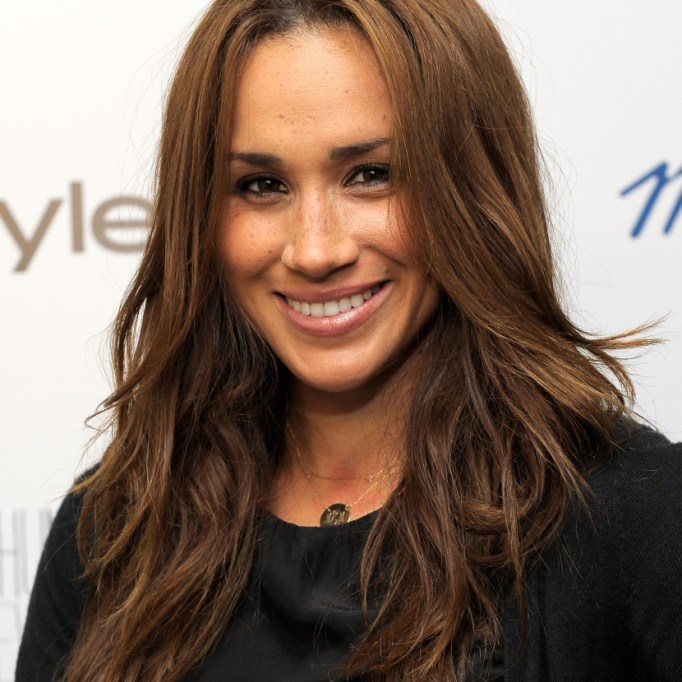 For Madewell, Alexa Chung and InStyle’s celebration of the launch of The Alexa Chung for Madewell Fall 2011 collection, Meghan sported caramel-colored wavy hair. This was the last time she would change her hair color. 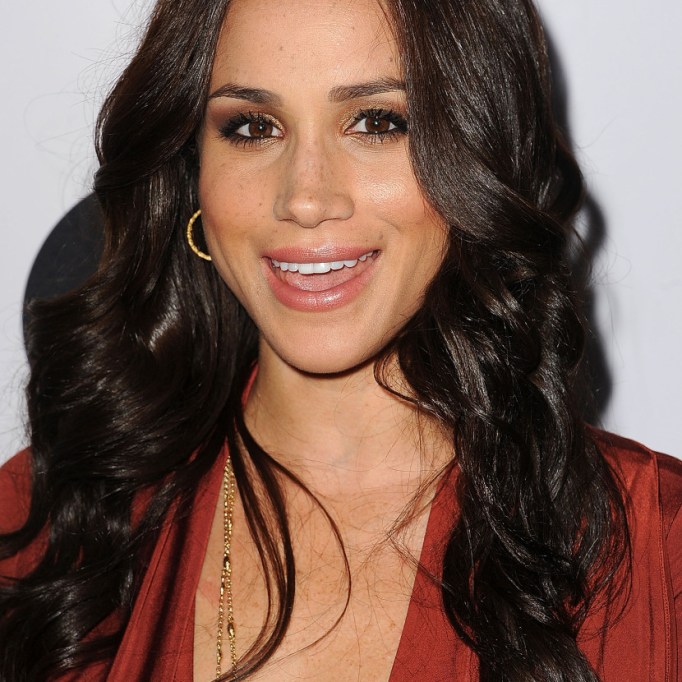 In Los Angeles at the GQ Men of the Year party, Meghan wore bold curls in her hair and sported a bronze smoky eye, which she rarely wore publicly after this event. 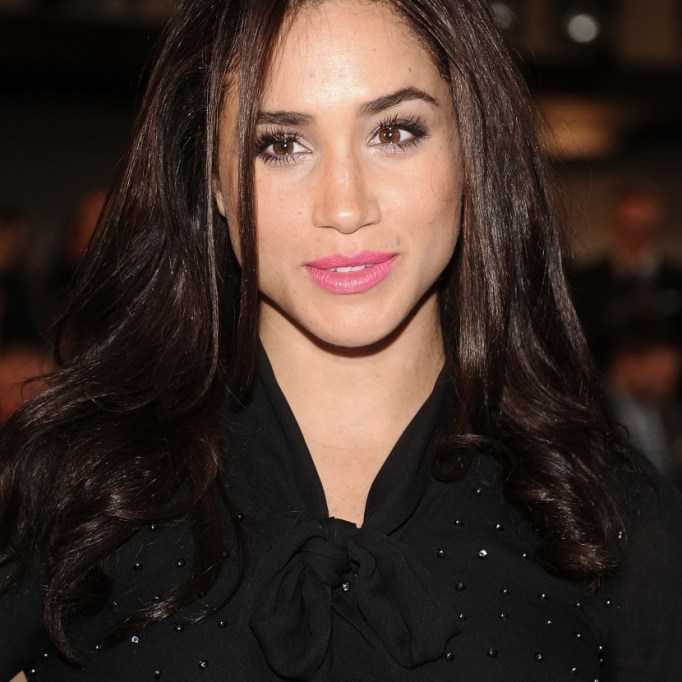 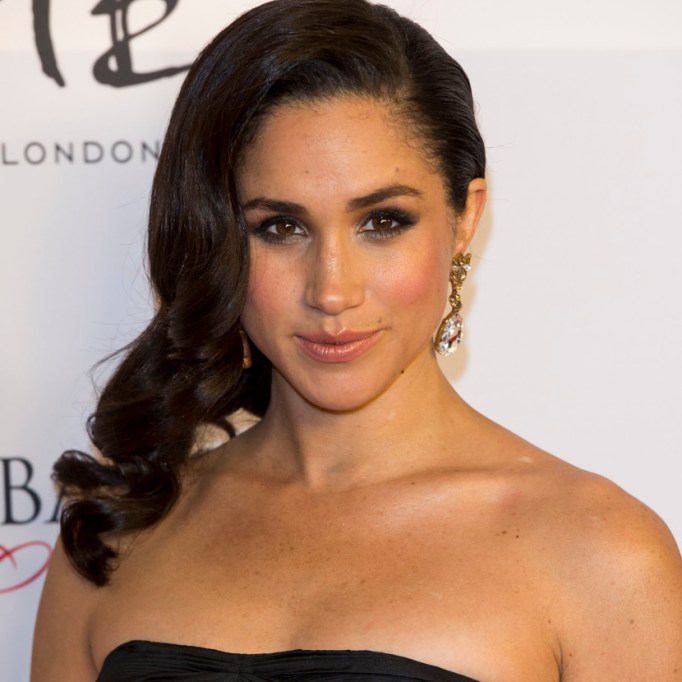 While in London (pre-Harry) for a gala, Meghan wore her hair in an Old Hollywood style with a dramatic side part and big curls. Her makeup was more daring than what she sports today in the U.K. Her smoky eye and blushed cheeks made the perfect formal beauty look. 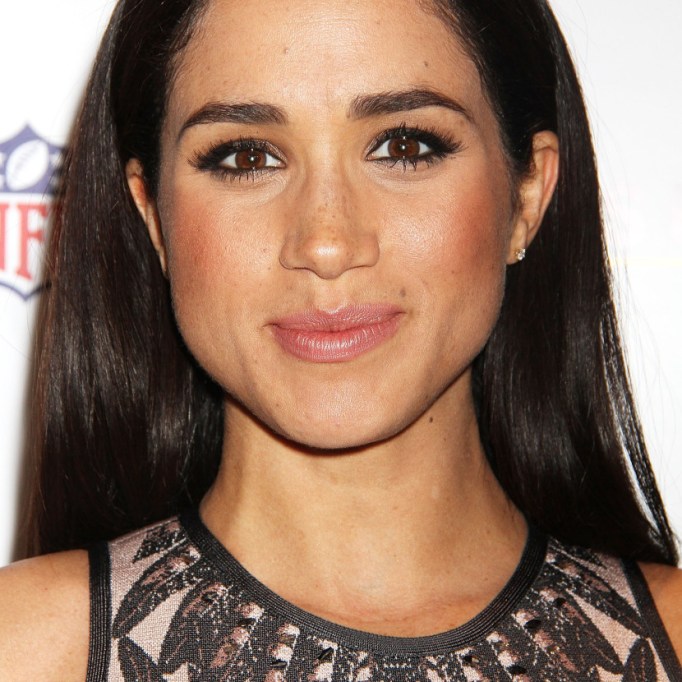 At the third NFL Characters Unite event, Meghan wore her hair straight with a middle part. She kept her makeup fairly classic, with a shimmery eye, mascara-dipped lashes and a subtle pink on her lips. 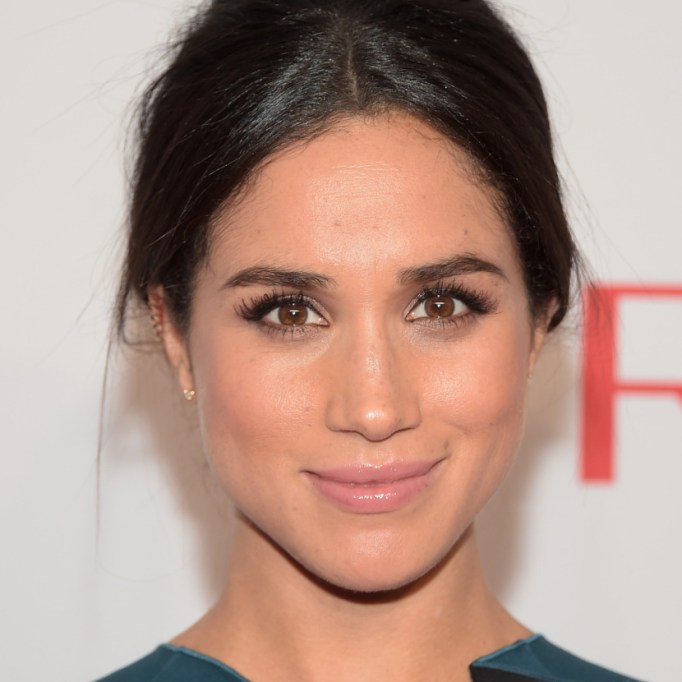 On the carpet for the Elton John AIDS Foundation’s 13th Annual An Enduring Vision Benefit, Meghan had a similar look to her now day-to-day duchess style. With a loose updo, groomed brows, glamorous eyes and a soft pink lip, she looked absolutely regal.

March 2015: Step It Up for Gender Equality Event 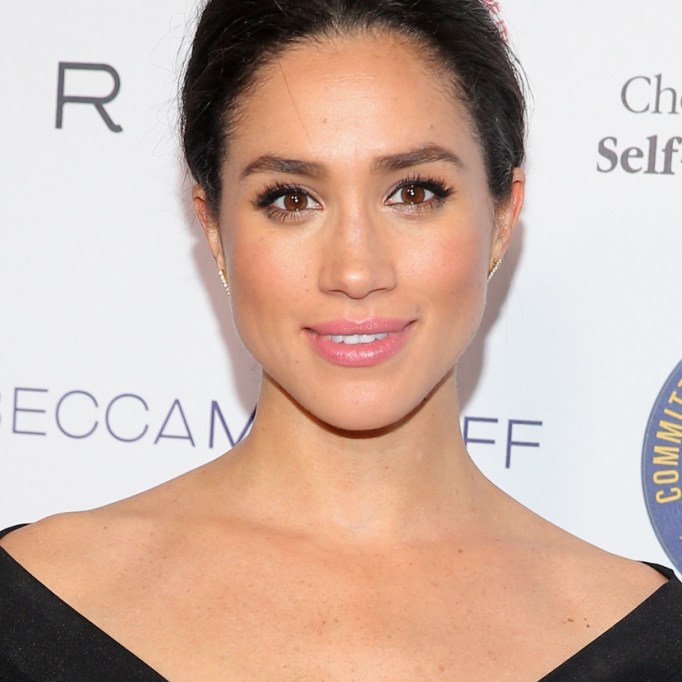 In New York City at a Step It Up for Gender Equality celebration, Meghan wore her hair in an updo with lightly filled-in brows, fluttering lashes and a pink lip. 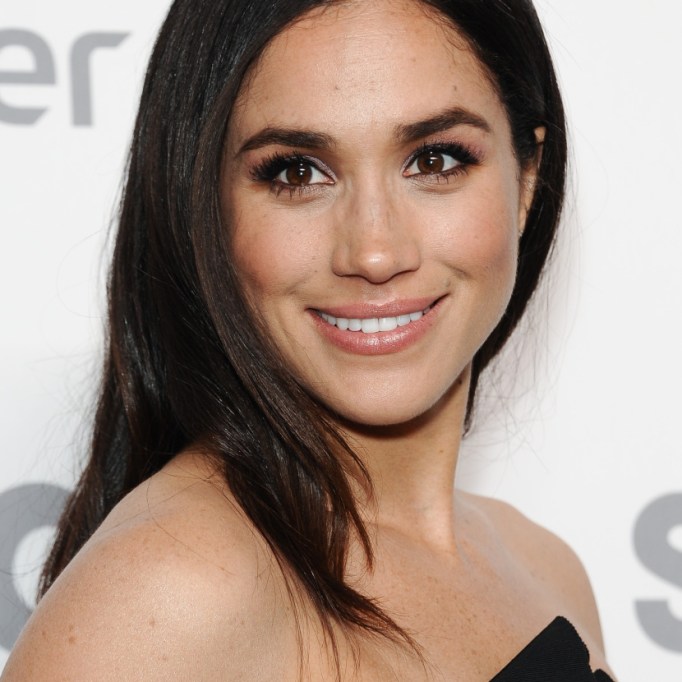 At the New York City event, Meghan parted her hair subtly on the left and opted for a shimmery eye, rouged cheeks and a rosy lip. 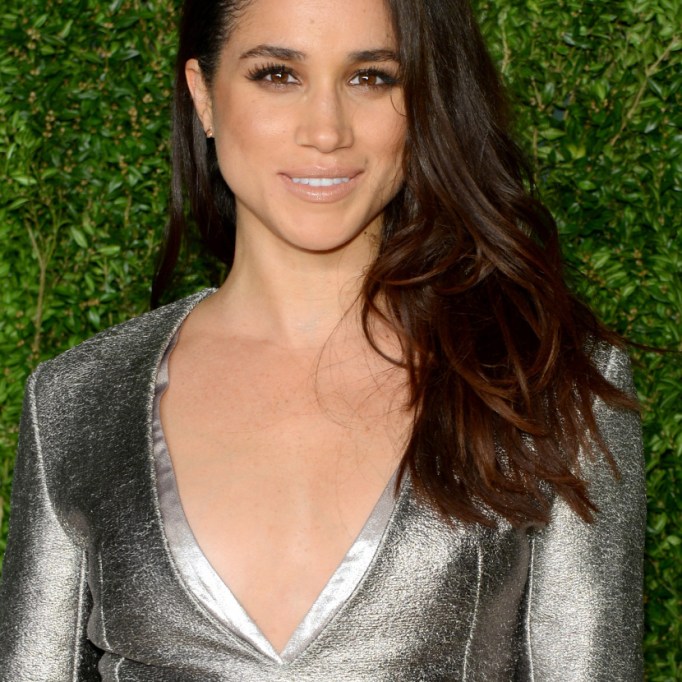 At the CFDA Vogue Fashion Fund Awards dinner in New York City, Meghan opted for a nude lip, bold lashes and a deep side part in her hair. 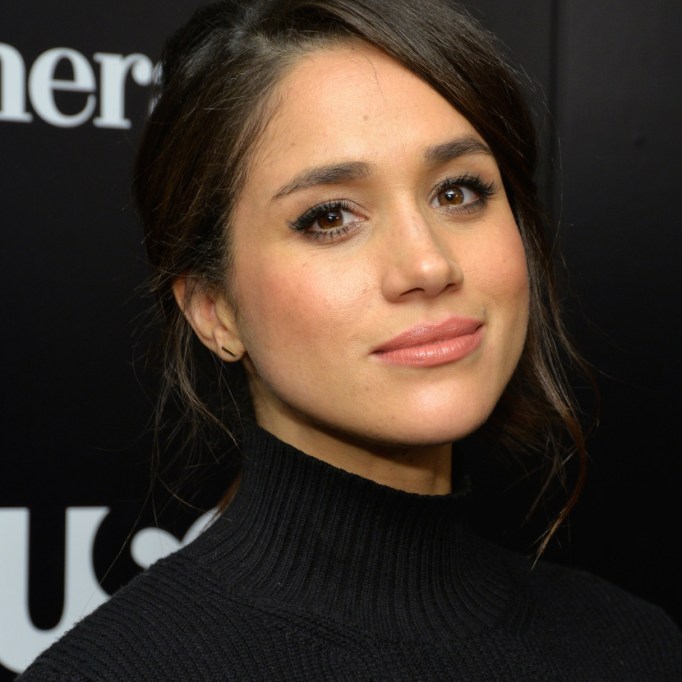 At the Los Angeles premiere of the fifth season of her show Suits, Meghan wore her hair in a messy bun with a subtle side part. She also kept her brows pretty natural at this event. 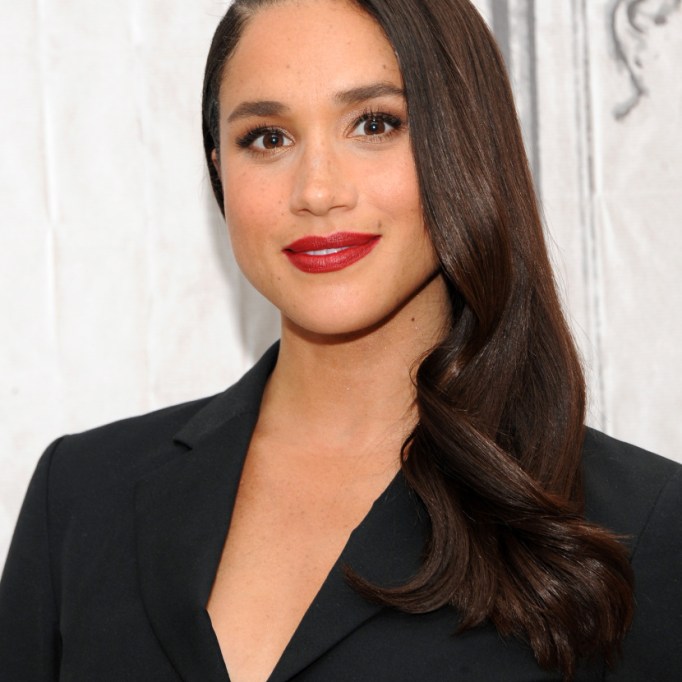 While discussing her show Suits during AOL Build, Meghan rocked a deep side part with big, soft curls. For makeup, she went with copper eye shadow, which differs from the light eye-shadow-and-top-liner look she usually wears today. This was also the last big public event she wore a red lip to. 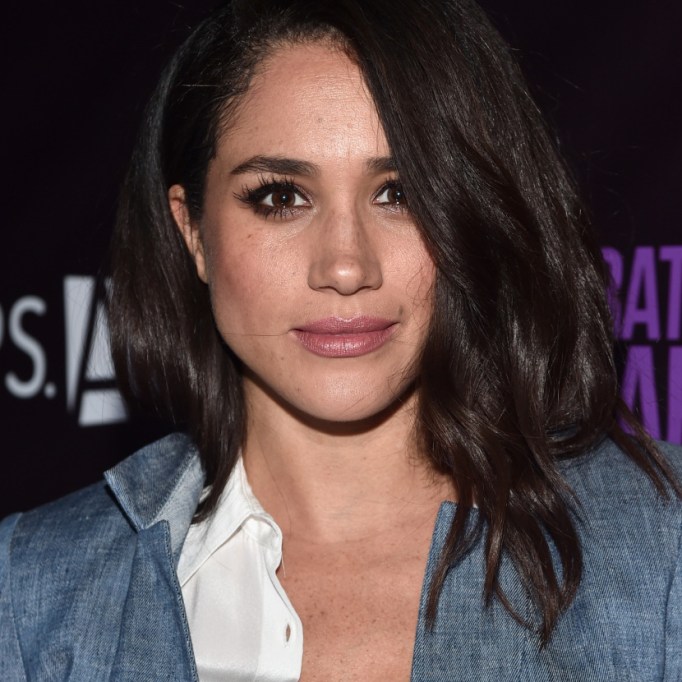 On the carpet for P.S. Arts’ The pARTy, Meghan sported thicker brows and a shiny deep-pink lip. 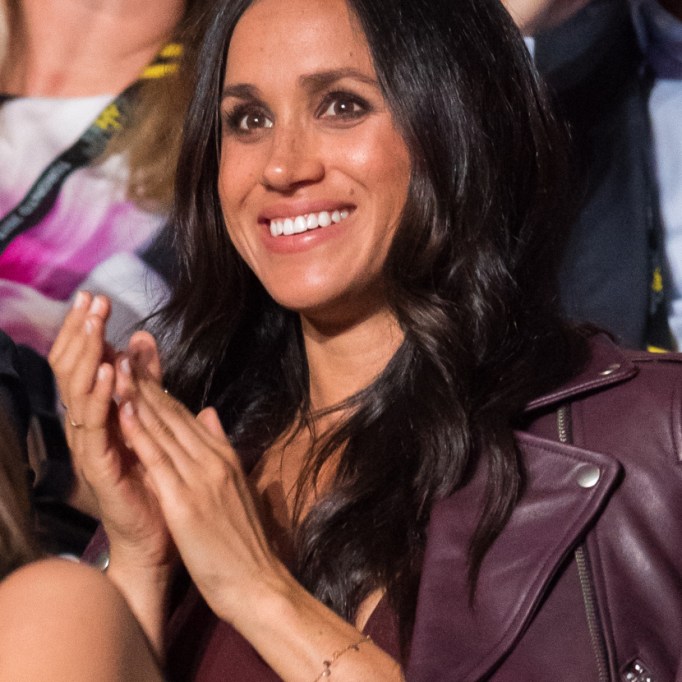 At the opening ceremony of the Invictus Games in Canada, Meghan had a light smoky eye and a hint of blush on her cheeks. 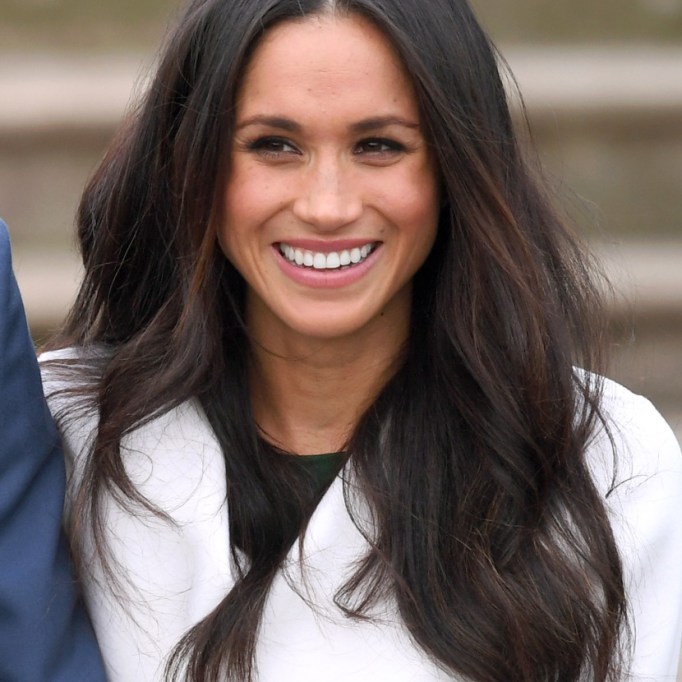 To announce her engagement to Prince Harry, she wore her wavy hair with a middle part and kept her makeup neat. Look at that smile, though! Getting engaged to a prince looks great on her. 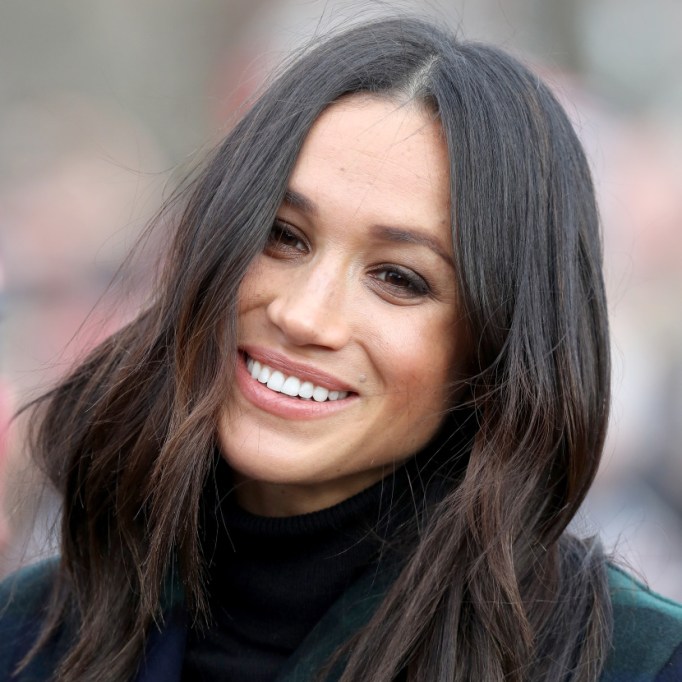 While arriving at Edinburgh Castle on an official visit to Scotland, Meghan had middle part in her lightly curled hair. She kept her makeup simple and had a warm nude tone on her lips. 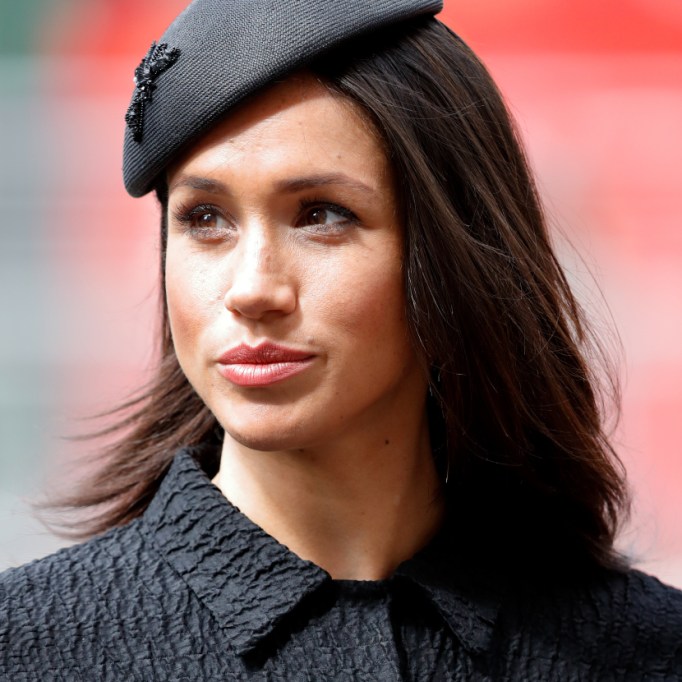 While attending an Anzac Day service, pre-duchess Meghan sported face-framing layers in her hair. For her makeup, she opted out of eyeliner on her bottom lash line and went with a deep pink lip. 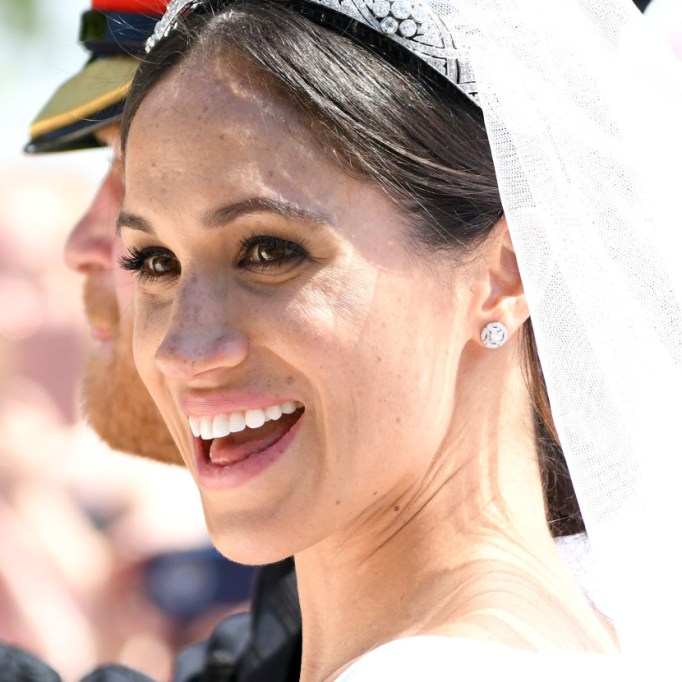 To wed Prince Harry, Meghan’s makeup artist, Daniel Martin, gave her a natural beauty look with a matte finish that showed off her natural, sun-kissed freckles.

At the parade marking the birthday of the sovereign, the duchess wore a Philip Treacy hat and had curled tresses. She kept her makeup classic and lightly filled in her brows.

To meet Irish President Michael Higgins, the Duchess of Sussex wore her hair in a neat low bun. For her makeup look, she traced her water line with black liner and had full lashes.

While attending the wedding of one of Harry’s school friends, Charlie van Straubenzee, the Duchess of Sussex wore a Philip Treacy hat and sported soft waves. The nuptials also happened to fall on the duchess’ birthday.

While watching the wheelchair basketball final at the Invictus Games in Australia, the duchess wore her hair half-up, half-down and had blushing rosy cheeks.

During the New Zealand leg of her 16-day official tour, the Duchess of Sussex wore her hair in a whispy bun to visit The National Kiwi Hatchery. She kept her makeup minimal and natural with a glossed lip and bronze eye shadow.