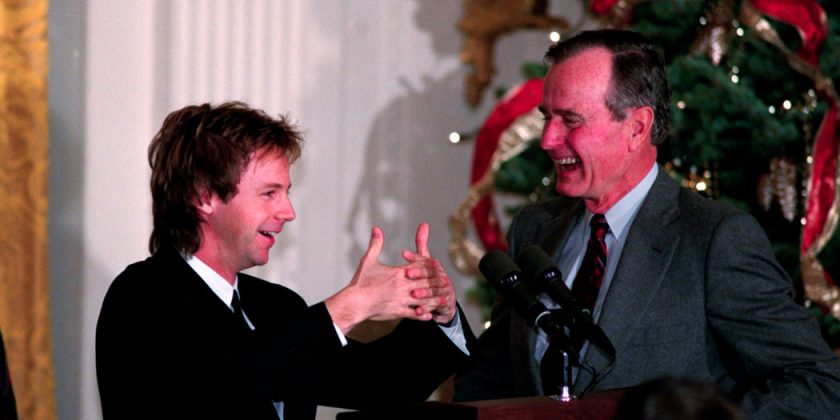 It’s nice when a boss can have a sense of humor, especially when he is the president of the United States.

Long before Mr. Bush flaunted his personality with eye-catching socks or celebrated milestone birthdays by sky diving, he showed off his lighter side when he secretly invited Dana Carvey, the comedian who impersonated him on “Saturday Night Live,” to take the stage at the White House.

The exchange, which was captured on video, is an endearing moment in what became a yearslong friendship between Mr. Bush, who died on Friday at 94, and the man who parodied him.

It was December 1992, and Mr. Bush, who had been defeated by Bill Clinton, was on his way out of the White House. He summoned his staff to the East Room for a formal Christmas greeting. But when “Hail to the Chief” began to play, it was not Mr. Bush who entered the room, but Mr. Carvey.

The crowd roared in surprise.

Mr. Carvey said: “I was staying in the Lincoln Bedroom last night and I couldn’t resist getting on the phone. And I called up the Secret Service as the president: ‘Feel like going jogging tonight in the nude,’” he said, slipping easily into Mr. Bush’s voice.

Onstage, he shared his secret for impersonating the president.

“Start out with Mister Rogers — ‘It’s a beautiful day in the neighborhood’ — then you add a little John Wayne,” Mr. Carvey said. Together, “you’ve got George Herbert Walker Bush,” he said in a parody of Mr. Bush’s nasal voice and gyrating hands.

The camera panned to a smiling Mr. Bush, who had called Mr. Carvey at home and invited him to the White House to roast him in front of his staff. 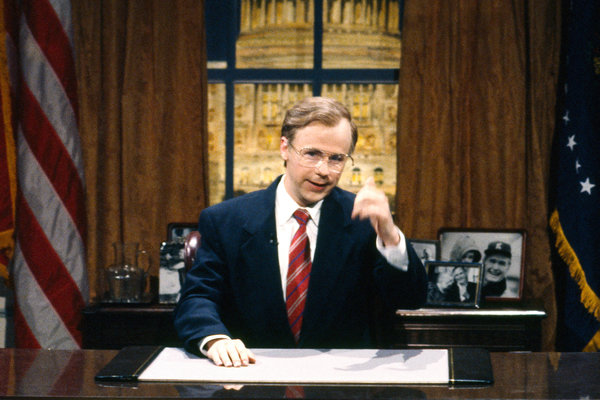 Mr. Carvey didn’t hold back. He referenced one particularly unsettling moment of Mr. Bush’s presidency — when he grew ill during a state dinner in Tokyo and vomited on the Japanese prime minister — and imitated Mr. Bush with a series of exaggerated hand gestures.

Mr. Bush and the first lady, Barbara Bush, eventually joined him onstage and performed their own hand gestures for the crowd.

When the president took the lectern — “I don’t dare move my hands,” he said — he thanked Mr. Carvey for visiting the White House.

“Dana has given me a lot of laughs,” Mr. Bush said. “He said to me on the phone, ‘Are you sure you really want me to come there?’ And I said, ‘Yeah.’ He said, ‘I hope I’ve never crossed the line.’ I knew exactly what he meant and as far as I’m concerned, he never has.”

“The fact that we can laugh at each other,” Mr. Bush said, “is a very fundamental thing.”

In his life after the White House, Mr. Bush continued to embrace the comedian’s impression of him, even referencing it in his eulogy to former President Gerald R. Ford in 2007. He also stayed in touch with Mr. Carvey over the years.

In an interview this year, Mr. Carvey told Conan O’Brien, the late-night host, that Mr. Bush wrote him notes at important moments in Mr. Carvey’s life and even called him on Election Day in 2004. “We had so many warm moments with them,” he said. “It was a different time. It wasn’t scorched-earth angry politics.”

In a statement on Saturday, Mr. Carvey said that “it was an honor and a privilege to know and spend time with George H.W. Bush for over 25 years.”

“When I think of those times what I remember most is how hard we would laugh,” he said. “I will miss my friend.”