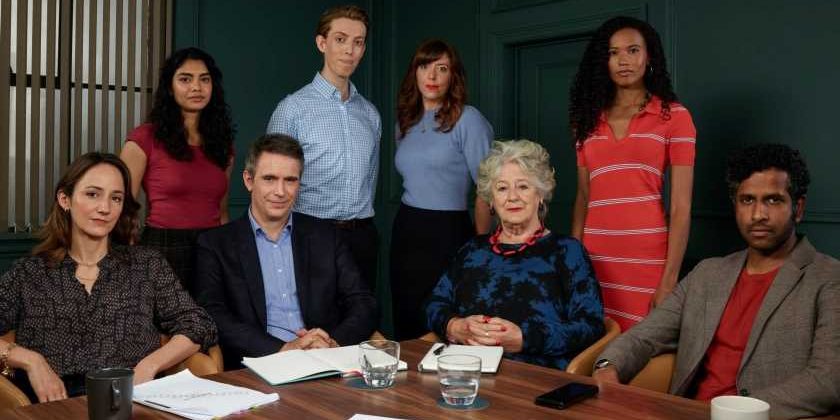 Amazon Prime’s new English language remake of Call My Agent! is sparking plenty of conversation – but how does Ten Percent match up to the original show?

Now that a fair few of us have made the big re-entry to office life, many of the things we pined for during the long, dark days of lockdown are back in full swing: juicy watercooler chats, copious cups of tea and IRL meetings where we’ve made the shocking discovery that we no longer have the ability to hold a conversation if it doesn’t involve the line: “Sorry, I was on mute.”

It’s with serendipitous timing, then, that a new TV series has just arrived with a bevy of Very British Problems for our viewing pleasure. Based on the cult French comedy Call My Agent!, Amazon Prime’s new English-language remake Ten Percent follows a likeable bunch of talent agents at a fictional London firm as they navigate the whims of their celebrity clients.

Ten Percent: all the best reactions to the star-studded remake of Call My Agent!

The decision to revive a show that is so resoundingly popular is a move fraught with peril: try staying faithful to the original version and a remake runs the risk of looking like a cheap copycat. On the other hand, straying too far from the source material in the name of modernisation can come off as disastrously try-hard. Carving out a new identity is certainly no mean feat.

The differences in the British remake of Call My Agent! are immediately obvious. No longer set in the first arrondissement in Paris, Agence Samuel Kerr (ASK) has been transplanted to the heart of Soho and is now known as Nightingale Hart. Instead of Isabelle Huppert, Juliette Binoche and Sigourney Weaver, the famous faces are much-loved British stalwarts of stage and screen: think David and Jessica Oyelowo, Emma Corrin, David Harewood and Helena Bonham Carter.

And the show has a distinctly British sensibility. Take the UK pop culture references, such as a cameo from much-loved daytime chat show host Lorraine Kelly, and mentions of Googlebox and The One Show. Or the droll humour, which manifests in sarcastic comebacks, eye-rolls and a painful grin-and-bear-it attitude recognisable to any Brit that never says what they really mean.

Its characters and storylines, however, faithfully trace the grooves of the original French show. There is the assistant who gets fired, two big-name stars vying for the same role, a female actor pressured to get plastic surgery in order to clinch a role in a leading Hollywood movie. There are estranged secret daughters, inappropriate crushes and the requisite dose of sneaky behaviour from agents trying to outdo one another.

Ten Percent: Rebecca Humphries in the Call My Agent! remake

Critics are predictably divided about the cultural crossover. Writing in Variety, Scott Bryan observes that while there is indeed scope for a British remake, Ten Percent is “so much of a faithful adaptation that you end up simply comparing and contrasting every plot point and detail with the original” and that fans of Call My Agent! will “soon be swept away by a sense of déjà vu”.

“Is Ten Percent for Call My Agent! fans who want to have the dynamic between talent and agent explored in another location? If so, they will be satisfied with how British and grounded this version feels, with constant jokes about and references to the UK’s A-list, from Phoebe Waller-Bridge to Danny Boyle.”

In the Guardian, Rebecca Nicholson agrees that the remake “is not so much inspired by the original as it is borrowing its clothes, car and house”. While Ten Percent “shares some of the original’s jaunty spirit and bounce,” she writes, there is a noticeable lack of satire and “surprisingly little to no self-deprecation”. That being said, the series remains a compelling watch.

Ten Percent: the remake of Call My Agent! is dividing critics

“I suspect that viewers who have not seen the French original may get more out of this, as the agents’ storylines about secret daughters and reluctant love affairs and buyouts and sell-offs have a heightened sense of melodrama that is rarely seen on British television,” she concludes.

“It’s amusing to view Lorraine and The One Show in a dramatic setting, and it is also extremely enjoyable to see which British actors, old and new, can pull off playing themselves.”

But what do viewers make of Ten Percent?

While many viewers on social media expressed apprehension at how Ten Percent would match up to the original, the remake is earning plenty of praise from both fans of Call My Agent! and newcomers alike. While the similar storylines and characters arcs aren’t everyone’s cup of tea, the specific focus on UK pop culture and generous sprinkling of beloved A-list talent tips the scales in the direction of a hit.

Perhaps the biggest draw of the British makeover, however, is that you don’t need to be familiar with the original series to follow along and get the gags. But despite its accessibility, there might be some cultural barriers that simply can’t be overcome, judging by one Twitter user’s experience of watching the show.

Ten Percent is available to stream on Amazon Prime now.