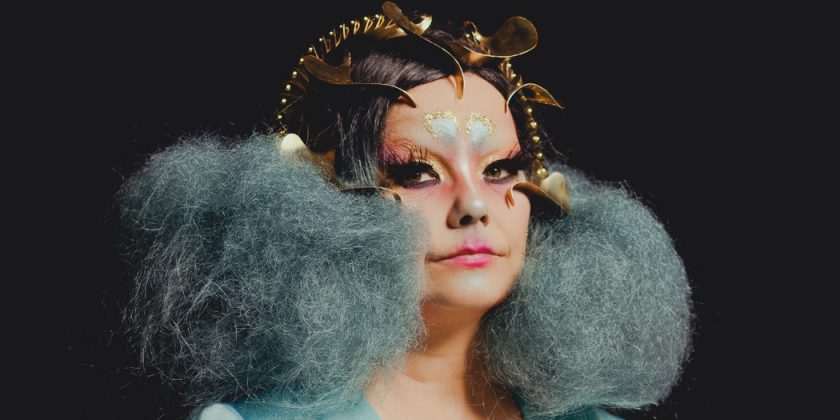 “A baby albino giraffe.” This is what flutes sound like, according to Björk. (That’s a real, and largely mute, creature, by the way.)

There are seven flute players, all women, in Björk’s latest live extravaganza, “Cornucopia.” She mentioned the giraffes as a way to translate her sonic vision to her collaborators. “Like, they’re kind of furry and they’re kind of clean,” she said of the animals, “but they’re not as clean as you think, because they’re actually giraffes.”

“If that makes any sense,” she added.

As an iconoclastic artist — a punk-turned-pop-turned-experimental singer, multimedia visionary, misfit-fashion darling, and proto-futurist with a lasting fixation on the melding of nature and technology — Björk, 53, is used to explaining her leaps of imagination. Somehow, coming in her lilting voice, it works. The flute, for example, was her childhood instrument, but she rebelled against classical composers and learned contemporary, atonal work — the furrier-sounding stuff.

“Cornucopia,” a major commission from the Shed, the new arts venue at Hudson Yards on the West Side of Manhattan, is characteristically ambitious — billed as Björk’s “most elaborate staged concert to date.” Opening Thursday, it includes a 50-member Icelandic young people’s choir, a custom-made reverb chamber, mesmerizing video projections, carefully positioned 360-degree sound and multiple bespoke instruments, some used for mere moments.

Björk calls it digital theater, or a sci-fi pop concert. But it is also a way to get into her head. Which, at the moment, is focused on a feminine, feminist, hopeful alternative future; the show is based around the music of her last album, “Utopia.”

“It’s like a fairy tale, I guess,” she said, “or like very purposely ecstatic, and kind of caustic.”

She was speaking over dinner last week during a break from rehearsals, dressed in a long pleated cloak in bifurcated marigold and purple florals, over a matching gloved jumpsuit; a glove dangled at her wrist while she ate. We sat in a space overlooking the theater and for no apparent reason — except, of course, that I was dining with Björk — the lights in the room grew progressively dimmer, until we were discussing hope and utopia and womanhood in pitch blackness. (It felt just right.)

Alex Poots, the Shed’s artistic director, commissioned “Cornucopia,” and sat back while Björk developed it over the last few years. “She has a prodigal approach to creativity,” he said. “There’s this combination of real rigor and punk brought together, that creates this explosion of creativity, because it never becomes staid or safe. There’s always this yearning to reinvent.” 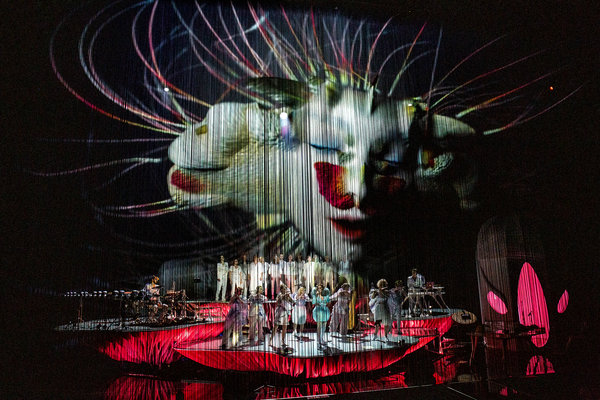 He had hoped that Björk would be one of the Shed’s first commissioned artists. “I would’ve been really upset if we hadn’t seemed relevant to her,” he said. He first presented her in 2011, when he lured her to the Manchester International Festival, where he was previously artistic director, with her conceptual-minded production for her album “Biophilia.” It spawned a long-running children’s educational project, and became a turning point in her career; she has hardly done a traditional tour since.

“Martha Rosler,” the feminist artist, “talks about the future flying in under the radar,” Poots said. “And certain artists like Björk are very tuned to keeping their eyes wide open all over. She’s someone who opens up questions rather than gives a lot of answers and instructions.”

“Utopia,” released in 2017, was Björk’s return to optimism, enthusiasm and romantic possibility — her “Tinder album,” as she has sometimes jokingly called it. Made in collaboration with the Venezuelan D.J. Arca, it was suffused with birdsong, loose melodies and the female flutists, all Icelandic musicians, who followed her to the Shed. The album was a response to “Vulnicura,” the bleak 2015 record she made after the end of her decade-long relationship with the artist Matthew Barney, the father of her teenage daughter.

“‘Vulnicura’ for me was basically really, really sad,” she said. “Just, like, winter in Iceland, rocks on the ground, no plants — you know, the melody was literally lying on the floor. It didn’t ever make big leaps.”

Her visualization for “Utopia,” by contrast, was like a 3-D scan of fireworks, exploding over a (symbolic) lush island in the sky. Musically, she and Arca “talked a lot about it, and we wanted the synths to sound like flutes and the flutes to sound like birds and the birds to sound like synths,” Björk said. “Nothing holding it down.”

Lucrecia Martel, a celebrated Argentine filmmaker who is making her New York and theatrical debut directing “Cornucopia,” was tasked with staging Björk’s vision. Asked about the giraffe-flute metaphor, Martel laughed. “Many of her explanations are of that style,” she said, through a translator. “And sometimes it’s a little bit hard to understand what that actually means.”

Still, she followed Björk’s lead. Björk did the musical arrangements, and Martel added what she called materiality and physicality, by, say, projecting video (by Tobias Gremmler) onto curtains instead of screens, creating transparency and the ability for performers to modify the visuals by touch. Sometimes, Björk presented ideas, particularly about wardrobe or dramaturgy, that made her fear “this is a disaster,” Martel said. “And when I see everything together, it is incredible.”

Collaborators include Björk regulars like James Merry, her co-creative director, who made intricate golden masks by hand for Björk and other musicians. The costumes are mostly by Olivier Rousteing of Balmain. (The show, with performances through June 1, is sold out.)

Björk has been the boss almost since she began recording. She still has the same manager, Derek Birkett, she chose as a punk teenager in Iceland, and has only signed with major labels as distributors. “I never had anyone, not even Derek, nobody I have to play the album for and say, ‘Oh, I don’t like song three,’” she said.

She stepped off the standard, grueling pop tour cycle after “Biophilia,” she said, “because I just didn’t believe it anymore. Also, I had a family.” She adapted her career to suit her needs. “If I want to pretend I’m a matriarch I might as well, you know, walk the walk,” she said.

The lifestyle suited her, but it had a professional cost. “I’m lucky because I was from the generation that I could actually buy myself a house, because I sold CDs in the ’90s,” she said. “I got a couple of houses and a cabin in the mountains. I’m O.K. But I probably haven’t made a penny in the last, I don’t know, 20 years. It just all goes back into my work — and I like it that way.”

That her last two albums have been far outside the pop-radio firmament does not seem to trouble her. Only once in her career, when she was living in London in the ’90s, has she felt, she said, like an A-list celebrity. “I was invited to all the hot parties,” she said, “and I just did it, had a laugh and thought it was amazing. And then I just woke up one morning and I was like, O.K., I’m done — like, the music is terrible, conversations are awful. I’m done.”

She moved to Spain and wrote “Homogenic,” with the realization that she was not the kind of musician who could be in the spotlight and still be creative. “I have to go in the shadow, in the corner, and have no one watch me,” she said.

In “Cornucopia,” her introversion is represented by the reverb chamber, a booth on the side of the stage with minimal amplification that’s meant to recreate the effect of her singing alone on long, rural walks, as she did growing up. In a preview on Monday, she sometimes disappeared from view when she stepped inside. “I’m scared,” she said with an expletive, of showcasing her vocals in such a raw way.

But there’s a lot to distract: two eight-meter-long organ pipes that resemble cannons are suspended in midair. They were specially made in Iceland and are used on only one song, “Body Memory.” Björk also sings from inside a Hula-Hoop-size circular flute, as four women play it.

“The whole show is a lot about females supporting each other,” she said. The flutists have been coming to her cabin in Iceland for years. “We would have flute Fridays and rehearse and brunch all day,” she said, describing her arrangements for them as “flute folk music for the future.”

The most direct appeal to the future comes from Greta Thunberg, the teenage Swedish climate activist, who delivers a video message toward the end of the show. Like Thunberg, Björk’s daughter has been participating in climate strikes on Fridays. Her generation, Björk wrote in an email, “is extremely aware of the power of activism and I’m very proud of them.” (Björk also has a 32-year-old son and became a grandmother earlier this year.) The lyrics on “Utopia,” she wrote, “are about proposing to come up with a more compassionate way to interact with nature. Hopefully to start from a female point of view will help.”

That is what Björk, who has been rooted in Iceland for the last year, has lately surrounded herself with. During our dark dinner, she said she was happy, and in love.

Romantic love? I asked in an email later. Or the spark that comes with creative connection from partners like Arca?

“Perhaps all of the above,” she wrote back. “‘Cornucopia’ is probably as expansive as I will get … an effort to find an equilibrium between all areas. And a way for love to be present.”

Björk’s Cornucopia
Through June 1 at the Shed, Manhattan; theshed.org. Sold out.