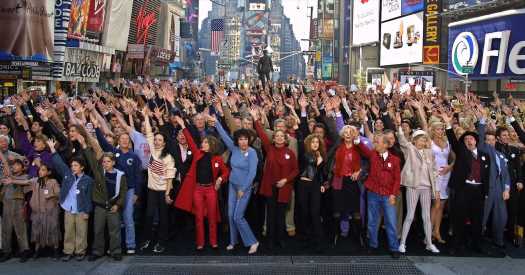 Following the Sept. 11 terrorist attacks, Broadway suspended performances for just two days, reopening on Sept. 13, 2001. But audiences were hesitant to return, and many shows performed to near-empty houses for weeks.

To encourage attendance, the theater’s brightest stars — many in costume — gathered in a mostly deserted Times Square on Sept. 28 to perform the John Kander and Fred Ebb song “New York, New York.” (A studio recording session was held the day before to capture audio).

Book ended by two of Broadway’s best-known voices, Bernadette Peters and Nathan Lane, the performance had the Phantom rubbing shoulders with the Beast, while “Lion King” puppets bobbed overhead. Brian Stokes Mitchell and Brooke Shields were there; so were the preteen urchins from “Les Miserables.”

The footage was used for a 30-second commercial that ran on major television networks, as well as in movie theaters across the country. The goal of the ad, according to its director, Glenn Weiss: “I want people to not be afraid to come and see a show.”

The week of the attacks, Broadway altogether grossed an anemic $185,490. After the commercial’s release, ticket sales steadily increased, and for the week of Nov. 11, shows brought in $470,845.

Twenty years later, as Broadway braces for another nervous reopening, there are striking parallels to that morning in late September. Indeed, on Aug. 30, the industry set in motion its own post-pandemic marketing campaign, including a clip-filled video entitled “This is Broadway,” narrated by Oprah Winfrey.

Here, those who were in front of the camera and behind the scenes for the 2001 ad reflect on the experience. These are edited excerpts from the conversation.

JAN SVENDSEN FRIEDLANDER, then-marketing director of the Broadway League On the 12th, I did go to work. I went to the League offices and all these members — producers and theater owners and general managers — started coming. No one knew what to do. And then midday, the mayor’s office called and they said, “You’ve got to get Broadway reopened.” So we agreed to reopen on Thursday the 13th.

NATHAN LANE, performer Everybody was shaken by what happened. And people were concerned it might happen again. “The Producers” had opened and played through summer and then it was the fall. We went back on a Thursday, all because of [then Mayor] Rudy Giuliani — this is before he was a raging [expletive]. It felt wrong to be going back so quickly. And yet we were trying to do something positive.

DREW HODGES, founder, SpotCo advertising agency Something like five days later we were back in the office and trying to figure out what to do. We had this idea of doing a TV commercial, getting everybody into Times Square. Barry Weissler, the “Chicago” producer, he was a friend. We went to him and said, “We have this idea, help us rock and roll it forward and get it to more powerful people.” And I believe he said, “I was thinking the same thing.”

BARRY WEISSLER, producer We knew we wanted to sing “New York, New York.” What else? It was an idea that grew out of my meeting with Jed [Bernstein, former Broadway League president], saying we should bring the entire Broadway community together in one place to celebrate humanity — the tragedy aside, 9/11 aside. Let’s celebrate Broadway, humanity and life.

BERNADETTE PETERS, performer Of course, New York was afraid. We were concerned: Is it going to happen again? But we just had to be brave and let people know that it was time to take back New York.

JERRY MITCHELL, choreographer Drew Hodges called me and said, “We’re getting ready to do a commercial. We’re filming in Times Square. I’m going to get all the actors before their matinee. Will you choreograph it?” I said, “Absolutely, what do you need?” He sent me the song, and I had 12 dancers, I think, with me. I choreographed a little something for them that night. And the next morning, we met at the Booth Theater [functioning as a green room]. I went onstage, and there was the Broadway community, in costume, sitting in the audience.

CHRIS BONEAU, publicist [Producers] were told, “We need two people to do this, and it has to be Nathan and Matthew [Broderick].” Or: “It can be three costumed characters, and these are the ones who we would like to get.” You got to hand it to the people who wrangled the whole thing. I mean, there were so many people behind the scenes who were doing every single thing they could to get this moment right, because you only had one shot at it.

HODGES We were standing in Shubert Alley, waiting to go into the Booth while the shows filed in. And we heard this jangling sound, and we couldn’t figure out what it was. And it got louder and louder. And then around the corner came all the Rockettes. And they were in costume, in formation in one line, tap dancing, literally, across an empty Times Square.

JOEL GREY, performer Everybody you ever knew in the theater all of a sudden was there, shiny and bright and ready to take on the world. Theater people believe in dreams, so we were all dreamers saying, “Everything is going to be all right.” We all needed to tell a story.

MITCHELL I was standing onstage [at the Booth] and said, “This is the choreography; everybody stand up.” I think I played the tape three times. And then as each group went to their place, I put an assistant with them. They took them out to the platform and started reviewing it. Then I went out front, and I climbed the George M. [Cohan] statue, and I was standing on the statue yelling at everybody over a megaphone.

PETER GALLAGHER, performer I remember Jerry, he couldn’t have been a more embracing and vibrant life spirit. And, frankly, it was just really reassuring to see everybody — just to see a lot of people you had known or worked with.

HODGES The last line is, and Nathan says it in the spot, “Come to New York and let’s go on with the show.” But it was supposed to be Giuliani.

FRIEDLANDER We kept hearing, “He’s coming, he’s coming. Don’t let anybody go, he wants to be in it.” So while we were waiting, a lot of the restaurants in Times Square came running out, and they were handing [out] cases of water and croissants and pastries and sandwiches and drinks.

GLENN WEISS, director Fire trucks were heading right past us. And literally every cast from every Broadway show stopped, turned and applauded. The people who get applause were giving applause, and it was for our first responders. That vision will stick with me forever.

PETERS We had our passion and our power and our love for New York and what it represents. Everyone was there. Of course Elaine Stritch, my dear friend, she just made it at the last minute, because she always would run just a little late.

HARVEY FIERSTEIN, performer We were told to wear anything we wanted except white. That was emphasized a bunch of times. So we were ready to shoot and a cab pulls up through the police line and out steps Stritch, all in white. And then of course, everybody’s already in place, so the only place she can possibly stand is dead center — in white.

LANE She thought, I think because of the success of “The Producers,” I would be in the front row and that if she stood next to me, she would definitely be on camera. She said, “Oh, no, no, no, I’ll be right here next to Nathan.” That I remember was very amusing. And very typical of her.

WEISSLER A few performers, when we placed them, insisted on pushing through to the front. I’m not going to name names. So take a look at who’s in front. She was a dear friend.

HODGES We had to plan where everybody stood, and it was a grid of 40 shows. So people like Susan Lucci and Alan Alda [both had previously been on Broadway] were in the front, as they did not have a show to stand with. And of course, they were recognizable.

FRIEDLANDER The concept was always to start really small with Bernadette. Bernadette symbolizes Broadway. And then the idea was just to go wider and wider and wider, so that you see Times Square, and you see that there was life there.

PETERS Although I started it and I’m the first voice, it’s all of us. That’s what was important. The feeling of the love between us made us all stronger.

HODGES Every single person did it for not a penny, which is kind of miraculous.

FRIEDLANDER Seth Popper [the League’s director of labor relations] was my counterpart; he managed to get all the unions to give us concessions, so that we could actually shoot this spot. In the real world, if we had tried to pay for that spot, it would have been millions of dollars.

GREY It was impossible to not want to be a part of it, to be somehow part of the solution. God, who would believe that there even was a solution?

GALLAGHER Fortunately, none of us are accustomed to certainty in any aspect of our lives. And so it’s the kind of pluck: We don’t stop performing in a show just because it doesn’t work, or it’s going to close. You don’t stop because there’s a threat. You just keep going.