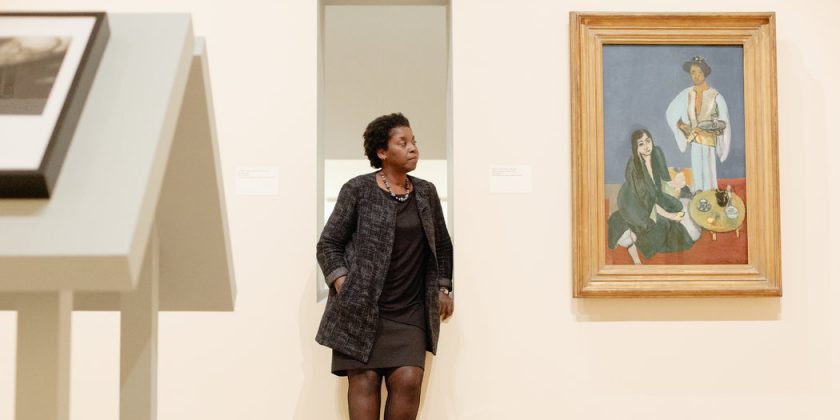 When the curator Denise Murrell talks about Édouard Manet, she races through the details of his life, sometimes abruptly changing course to parse less-discussed aspects of his art — often in disbelief that she’s among the few who have paid attention to these parts of him. After she has so convincingly retold his life story, you can’t help but see what she considers obvious: In his famous 1863 painting “Olympia,” Manet wanted the black maid to stand out.

Revealing that maid’s identity became the foundation of Ms. Murrell’s doctoral dissertation, and the driving force behind her exhibition “Posing Modernity: The Black Model From Manet and Matisse to Today,” currently on view at the Miriam and Ira D. Wallach Art Gallery at Columbia University.

[Read the New York Times review of the exhibition.]

Ms. Murrell was working as a business executive when, in 1999, she started taking art history classes. She wasn’t interested simply in identifying black figures in art. She wanted to contextualize their presence, focusing on periods in which the black model remained woefully underexamined.

“During the Renaissance, there is ‘The Adoration of the Magi,’ and there is always an African king,” she said in a recent interview. “I really wanted to understand why that was. Were they imagined images? Were they posed from life? Were the models known?”

In one lecture when she was in school, a professor introduced a slide of “Olympia.” After he remarked on the work’s naked white courtesan, Ms. Murrell was curious how he would address the figure of the black maid, Laure. But he merely moved on to the next slide. 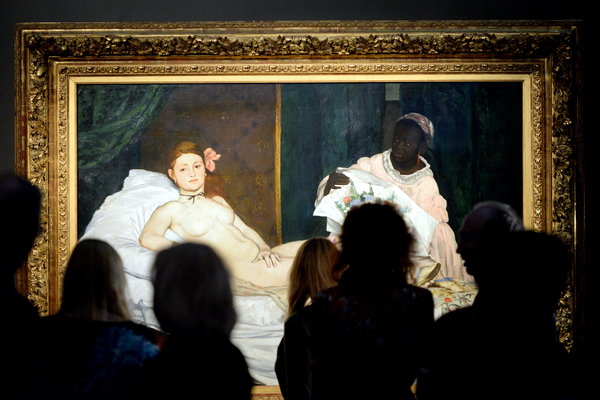 “Wait a minute,” she said she remembered thinking, upset by the omission, which was later repeated by other professors. “A person of color who is standing right there before you, and being ignored, is something that is part of the condition of being” part of the African diaspora to begin with. Art historians play a significant role in shaping our understanding of the past. It bothered her that their narratives would rewrite, subjugate or exclude the history of black people.

When Ms. Murrell decided on a career change, and was transitioning into art history, her mother mailed her a photocopy of a page from her high school yearbook. It reminded her that as a teenager in Gastonia, N.C., she had wanted to be a history professor. She studied economics instead, getting her M.B.A. from Harvard and moving up the ranks at high-profile finance companies, like Citicorp and Institutional Investor.

In her finance days, she joined museum groups offering tours and studio visits; learning about contemporary artists like Mickalene Thomas and Faith Ringgold stoked her curiosity. “It’s fun, it’s social,” Ms. Murrell said of the groups. “But it’s a passive situation. There’s no input. You’re just a willing recipient of what the museum offers.”

Before leaving on work trips, she would consult old volumes of “The Image of the Black in Western Art” to determine what she would be able to see on her travels. Finally enrolling in an art history class, she spent the next five years completing the coursework required to apply to a Ph.D. program, giving gallery talks at the Metropolitan Museum of Art in her spare time. In 2007, she started her doctoral research at Columbia.

The image of Laure, the black maid, stayed with her. Many art historians had decided that Manet had used her simply as a marker for an exotic servant, an unsurprising way to portray a black woman. As a result, they ignored her. But Ms. Murrell was determined not to let the art world, which had paid little attention to previous attempts to honor Laure, continue to dismiss her.

Ms. Murrell approached one of her professors, Anne Higonnet, about looking deeper into Manet’s portrayal of Laure. Ms. Higonnet was supportive, but Ms. Murrell encountered pushback from others.

“Sexism and racism run very deep, in the Columbia art history department as elsewhere,” Ms. Higonnet wrote in an email, “and I was taken aback by how subtle the ways were in which Denise was underestimated.”

While she was on a fellowship in Paris, Ms. Murrell met Mickalene Thomas, and the two went to look at “Olympia.” In front of the painting, Ms. Thomas deconstructed Manet’s methods, concluding that he was “presenting” Laure to the viewer. Ms. Murrell agreed. She acknowledges that Manet was a man of his time, but is adamant, citing details she’s excavated about interracial mingling in his social and artistic life, that he viewed Laure as a person of significance, just like the model for the white woman in the painting, Victorine Meurent.

Ms. Murrell went on to reconsider Matisse’s use of black models in light of his trips to New York during the Harlem Renaissance, and circled back to the question that triggered her entanglement with art to begin with: How have contemporary black and nonblack artists reflected on these black figures in their work?

But Ms. Shaw added that she hasn’t encountered many black students in art history, especially working outside the modern and contemporary period. There are a “constellation of reasons for this,” she said, including the discomfort some feel in not seeing themselves represented in the curriculum or faculty. In Columbia’s introductory art history course, white men make up the vast majority of the syllabus. Meredith Gamer, who recently taught a section of this course, included Ms. Murrell’s work in her class to help “destabilize some of the narratives around these great white men.”

“No one teaching a survey of art history responsibly can do what was happening before,” Ms. Gamer said.

Scholarship around black representation is growing, though gaps remain. And museums are increasingly addressing the full range of their communities, and the needs of a public more attuned to issues of race — approving exhibitions, like Ms. Murrell’s, that probe what blackness really means in the context of art history.

Those shows, however, aren’t easy to put together. Organizing “Posing Modernity” took persistence: When Ms. Murrell ran into roadblocks, she found funders and strong-armed institutions for loans.

Ms. Murrell said that while curators, art historians, gallery owners and others in the art community are sincere when they talk about diversity, they are also reluctant to dismantle established norms, including those that work against people of color. Larger institutions want to play it safe, and often refrain from funding unconventional scholarship.

“There’s the concern that if you talk about race or any other kind of marginalized subject, how broad is the interest going to be?” Ms. Murrell said. Leaning on a mentorship model borrowed from her time in the corporate world, Ms. Murrell said she wants to create an incubator for minorities with new ideas.

In the end, she wants to ensure that they’re as visible as she’s helped make Manet’s model.

Posing Modernity: The Black Model From Manet and Matisse to Today
Through Feb. 10 at the Wallach Art Gallery, Lenfest Center for the Arts, Columbia University, 615 West 129th Street, Manhattan; 212-854-6800, wallach.columbia.edu.

Denise Murrell will give a lecture on her research at 6:30 p.m. on Jan. 15 at the Art Students League of New York, 215 West 57th Street, Manhattan; theartstudentsleague.org.