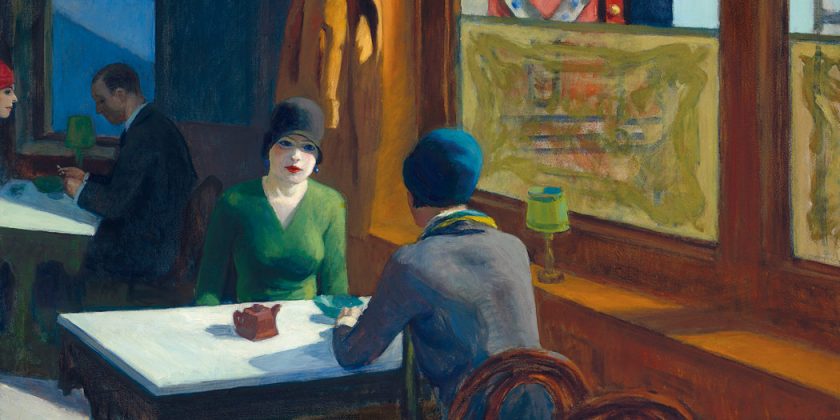 He is America’s most celebrated painter of the solitary realities of 20th century life. But Tuesday night at Christie’s, Edward Hopper joined the unreality of today’s art market when his 1929 painting “Chop Suey” sold for $91.9 million, with fees, an auction high for the artist.

“Chop Suey” was the most expensive of 91 works Christie’s offered from the estate of Barney A. Ebsworth, the Seattle-based travel entrepreneur and renowned collector of American art, who died in April. Reportedly long-promised to the Seattle Art Museum, this much-exhibited painting of two young women seated in a sunlit Chinese restaurant had been estimated to go for $70 million to $100 million.

“Really, $100 million for a Hopper? I don’t how they come up with these valuations,” said Howard Rehs, a New York gallerist specializing in American art, who, like other dealers, expressed incredulity at some of the estimates put on works in a “gigaweek” of Christie’s, Sotheby’s and Phillips art auctions that could raise at least $1.8 billion.

But “Chop Suey” was always going to sell, being one of 10 works in Christie’s 42-lot evening session of the Ebsworth auction backed by third-party guarantors. They hoped either to buy the works or be financially rewarded if they were outbid. The guarantor of the Hopper, for example, was rewarded with a handsome financing fee of about $4 million, deducted from the final price.

As was the case with the $833 million sale of the collection of David and Peggy Rockefeller in May, Christie’s had itself offered the sellers a guaranteed minimum price for the entire collection, the details of which have not been disclosed. The overall presale estimate was $261 million. The evening session raised $317.8 million.

The combination of some hefty estimates and third-party guarantees resulted in measured bidding for the top lots. Willem de Kooning’s 1955 canvas, “Woman as Landscape,” a rare early work at auction, took $68.9 million, with fees — also a salesroom high for the artist. And the relatively small 1950 Jackson Pollock drip painting “Composition With Red Strokes” went for $55.4 million. Both works sold near their low estimates. 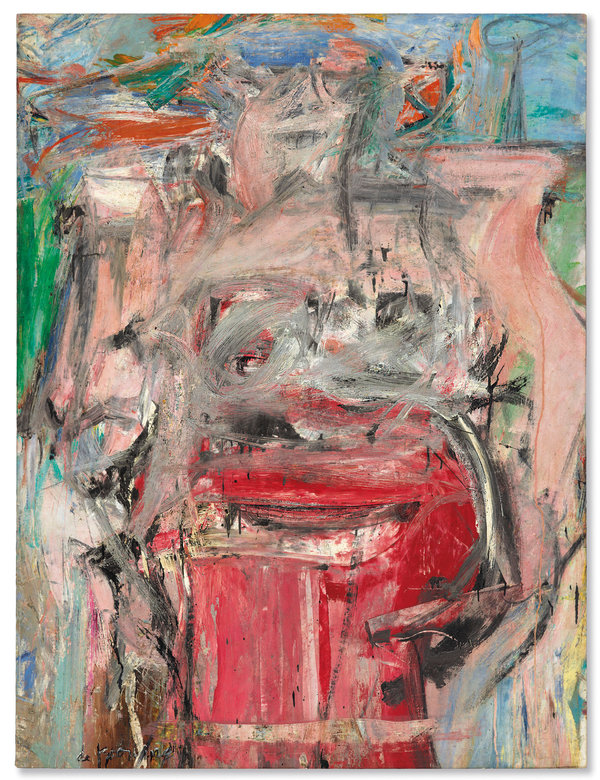 “It didn’t fly, but it was pretty solid,” said Philippe Ségalot, a private art dealer based in New York, referring to the auction.

With Christie’s securing the prime 20th century collection of the November auction season, Sotheby’s had been keen to include trophy works in its Monday evening sale of Impressionist and modern works.

Eyebrows were also raised by the $30 million Sotheby’s had guaranteed the New York collectors Ed and Deborah Shein to sell a 1913 painting by the pioneering American modernist Marsden Hartley. The artist had hitherto achieved a high of $6.3 million at auction, according the Artnet price database.

“Pre-War Pageant” is one of an art-historically admired series of some 30 abstract paintings, filled with symbolic shapes and patterns, that Hartley made in Berlin from 1913 to 1915, inspired by his friendship with a German army officer.

“He’s an interesting artist, but I don’t know how much he means to an international audience,” said the New York collector David Nisinson who, along with Mr. Rehs, the New York dealer, regarded even $15 million as an ambitious valuation for the painting.

Sotheby’s was unable to find a third-party “irrevocable bidder” to back its $30 million risk on the Hartley and on Monday it failed to sell, denting the profitability of a 65-lot auction that raised $315.4 million. But other, less highly valued works did inspire competition.

Demand had been more subdued the previous evening at Christie’s sale of 61 Impressionist and modern works. Though a Claude Monet water lily painting from about 1918 did sell for $31.8 million, the final total of $279.3 million was below the $304.7 million presale estimate, and there were several big-ticket casualties.

Van Gogh’s 1887 oil-on-canvas garden scene, “Coin de Jardin Avec Papillons,” for instance, was ambitiously estimated at $40 million. Neither Christie’s nor a third party was prepared to guarantee the work at that level, and it was left unsold.

“Things are 10 to 20 percent too expensive, and until estimates come down, I’m out,” said Philip Hoffman, chief executive of the Fine Art Group, based in London, which had regularly guaranteed works at Impressionist and modern auctions. “It’s a tough market,” he added. “And I’m not in the business of owning art.”