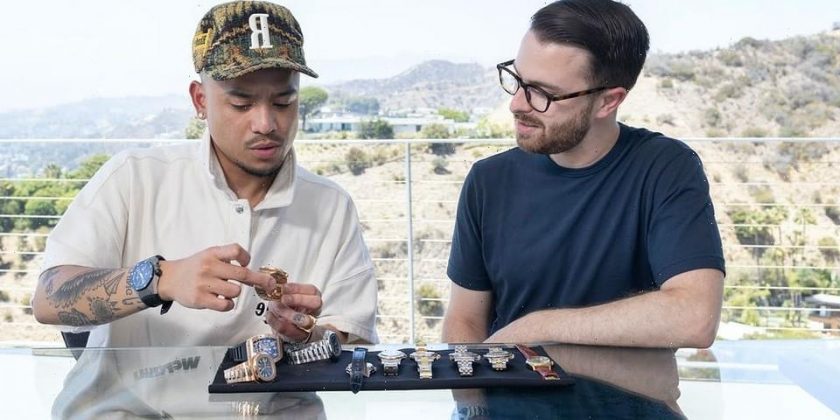 Following an interview with Ed Sheeran, HODINKEE features Rhude founder and new creative director of Bally Rhuigi Villaseñor, on its latest installment of Talking Watches, an original series exploring watches and the people who love them.

Stephen J. Pulvirent. serves as the host for the episode, which walks through a range of vintage and modern timepieces from Rolex, Patek Philippe, Audemars Piguet, and Richard Mille.

Villaseñor reveals that he started collecting watches at 24 as something he and his father bonded over while he was still living at home. His entry point was a gold vintage Rolex Datejust for his father and a gold Day-Date, that he bought for himself when his brand first started picking up selling bandana-print T-shirts. He has now modified his Day-Date as one of the first of his “Rhework” watches, featuring a Tiffany dial, leather bracelet, and Rhude engraving on the back.

“When I started to buy these things I didn’t have that much money so I wanted to make sure that it was at least safe, and I wasn’t too fond of all the movements and all the other information that kids ultimately care about now,” said Villaseñor.

His next purchase is a Rolex GMT-Master Ref. 1675 “Root Beer,” a classic watch that reminds him of the hustle of the early days, driving around LA to pick up fabrics and check on samples. Villaseñor then displays two  Rolexes Pulvirent describes as “fun” watches, a Rolex Daytona with a Diamond Mother-of-Pearl dial, and a Rolex Datejust Pearlmaster featuring factory-set diamonds. Villaseñor revealed, “I think I had rap dreams when I bought this. I was figuring it out.”

The next timepiece on display is the Patek Philippe Ref. 5205G, a gentleman’s piece fitted with an annual calendar. “My focus now with watches is to try to bring attention to dress watches for the young guys because we’re putting a lot of pressure on sport watches with all the Nautiluses and all the Rolex Sport watches. We tend to forget these are the catalysts for the big brands. Their most proud works are the complications and minute repeaters, and all of that,” said Villaseñor. He draws a comparison with his own brand. While Rhude makes T-shirts and hoodies, his most proud works are of tailored garments and leather goods.

Villaseñor then displays two Nautilus models, expressing his love for Patek Phillipe while admitting he still has much to learn. The designer ends the series with a Richard Mille worn on a Rhude-yellow leather strap which accompanied him on his first trip back to the Philippines after successfully acquiring his U.S. citizenship, an Audemars Piguet Royal Oak Concept Tourbillon that personifies his more futurist side, and an Audemars Piguet Royal Oak Perpetual Calendar Skeleton, one his all-time favorites.

Take a look at Villaseñor’s full interview above.

In other news, Singer reveals its next generation of Porsche 911 services in the “Turbo Study.”
Source: Read Full Article