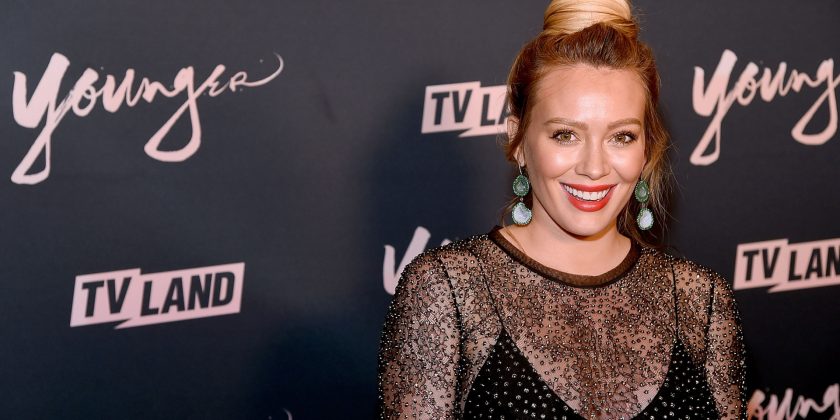 Time to rock a three-bun half-up, half-down hairdo and a rhinestone-bedazzled tank top, because Lizzie McGuire might be coming back. During an interview with ET’s Katie Krause over the weekend, Hilary Duff revealed that not only has the topic of a reboot come up, but she’s also given it quite a bit of thought herself.

“There’s been some conversations,” Duff hinted, before adding a disclaimer. “It’s definitely not a go. I don’t want to get everyone wild talking about it.”

However, Duff isn’t afraid to really lean into her fondness for that nostalgic role, explaining, “I mean, I love her so much. I think she was so important to girls at an important time in their life. If she could be important to them again at this age, I think that would be amazing.”

As for what a modern Lizzie McGuire’s life might look like, Duff confesses there have been “lots of conversations” about that — but it’s still up in the air.

“I’m racking my brain. I don’t think she’s a mom yet, but she might be getting there soon,” Duff told Krause, adding of the possibility of a revival, “It’s fun. I feel excited.”

Before the fandom could totally freak out, though, Duff once again erred on the side of caution, saying, “It could be a possibility or it could be nothing, so we’ll see.”

Although the original Lizzie McGuire series only lasted two seasons (and a movie!) on the Disney Channel, it became a sort of cultural zeitgeist. Over the years, fans have consistently called for a revival or reboot, and rumors have circulated more than once that one might happen.

And while Duff hasn’t ever give much hope to the idea in the past, perhaps she opened the door to the possibility in June during an interview with Buzzfeed.

At the time, Duff said of a Lizzie McGuire revival, “Honestly, the idea sounded terrible two years ago when reboots were happening, but you never know. I don’t know. I loved Lizzie McGuire and it might be really fun to see where she is now.”

After all, it has been a hot minute since the show aired in the early 2000s. Last May, while celebrating the 15th anniversary of The Lizzie McGuire Movie’s release, Duff exclaimed to The Hollywood Reporter, “Oh my gosh. Has it been 15 years?”

Today, Duff is all grown up with two kids: son Luca with ex Mike Comrie, and new baby girl Banks with boyfriend Matthew Koma. So, yeah, it would be interesting to see if life has followed a similar path for Duff’s one-time alter-ego, Lizzie McGuire.

Until that time, we’ll go ahead and start digging out our butterfly hair clips and NSYNC CDs in anticipation of all the ‘00s-themed viewing parties we’ll be hosting.