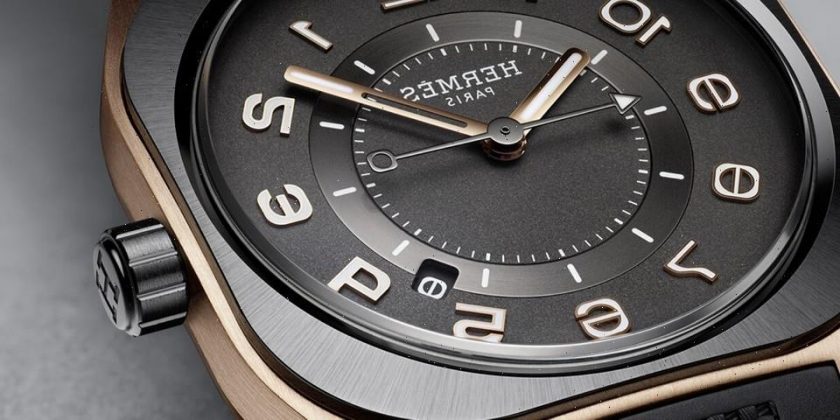 The latest additions to Hermés’ H08 watch series come in a rose gold and titanium build, boasting sporty appeal and urban sophistication. First unveiled in 2021, the H08 model is the luxurious Maison’s first attempt at crafting a men’s timepiece. Since then, Hermés has launched several iterations of the watch, from black with gray, Titanium Blue, to a limited-edition rendition with taxi yellow accents.

Designed by Philippe Delhotal, Creative Director of Hermès Horloger, the new edition is crafted in a lightweight yet sturdy alloy material and remains faithful to the model’s cushion-shaped case. Running on Hermés’ own H1837 mechanical and self-winding movement, crafted in Switzerland with a power reserve of 45 hours. The caseback is composed of DLC-treated titanium in black and is paired with a rose gold center.

The two-tone color scheme continues on the front of the 39mm watch, where the black ceramic bezel and crown are set against a satin-brushed rose gold case. Its finely-grained dial is highlighted with luminescent hands and indices which are treated with gold borders. Accompanying the piece are two strap options, one made of black rubber, the other in an anthracite fabric webbing build, both complete with a titanium DLC folding clasp.

The new Hermés H08 watch’s official release date and price point are yet to be announced. For more information, head over to the brand’s official website.