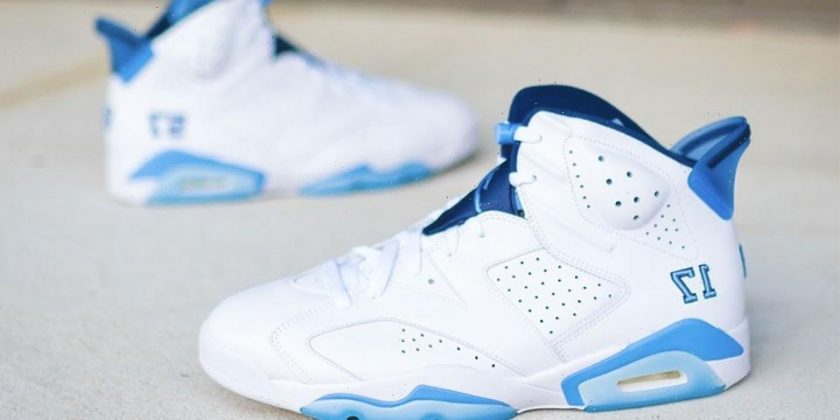 Although the University of Carolina fell short of three points to Kansas in the recent NCAA basketball championship held on Tuesday, English Sole took the moment to pull up an Air Jordan 6 PE pair made in commemoration of the team’s last national reign back in 2017.

While the UNC Tar Heels won’t be seeing a possible special edition offering this year, we at least got a look at the previous gift by the Jordan Brand in the form of the AJ 6 — the same model Michael Jordan wore when he banked his first title.

The Air Jordan 6 PE “UNC NCAA Champions” comes in three variations with the rendition at hand taking up a predominantly smooth white leather base detailed with the team’s iconic shade of blue complemented with darker tones. A soft dark blue lace guard showcases an embroidered Jumpman motif in baby blue to match the branded lace lock and translucent tongue. Abbreviated years of claimed national titles are embroidered along the heel with the pairs given to the players featuring a gold outline around the number “17,” while the version Nike and Jordan Brand friends and family received has the “82” outlined to honor the year of Jordan’s team’s victory.

Within the interiors, one insole is marked with a crossed-off checklist of the teams that have fallen to UNC during each championship game, while the other is stamped with the Tar Heel’s mascot. A blue translucent TPU pull tab and the model’s signature molds in light blue finish off the look.