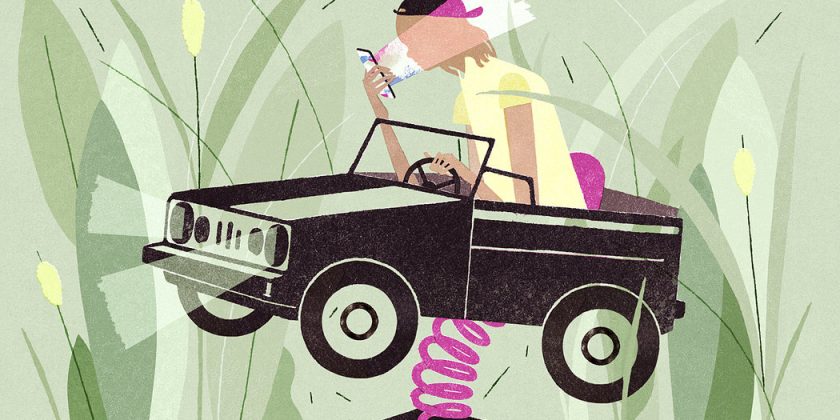 My 16-year-old grandson, who lives in suburban Los Angeles, is on the verge of getting a driver’s license and, quite frankly, I’m terrified. Driving around L.A. is scary even for very experienced adult drivers. Does a 16-year-old boy, whose navigation skills are limited to the internet, have the judgment, attention span and ability to process a dozen different inputs simultaneously necessary to avoid an accident?

Mind you, learning to drive was not my grandson’s idea, but his parents are tired of chauffeuring the kids everywhere, and options to walk, cycle or take public transportation, which suited my 18-year-old grandsons in New York City just fine, are lacking where they live.

If I could make the rules, no one under 20 would be behind the wheel of a motor vehicle without an experienced licensed adult in the passenger seat. Even compared to 18-year-olds, the brain of a 20-year-old is more mature and less likely to succumb to risk-taking. Crash investigations have shown that “the cause of teenage crashes is not the skill with which they can drive, but the judgment they exercise while driving,” according to an editorial in the Journal of Adolescent Health.

Although the number of teenagers killed in motor vehicle crashes has dropped by almost 50 percent in the last decade, crashes remain the leading cause of adolescent death and injury in the United States. And since 2014, along with the use of electronic devices, teenage motor vehicle fatalities have risen, according to a new policy statement by the American Academy of Pediatrics.

A recent study, published in the Journal of Adolescent Health, found that new teenage drivers were eight times more likely to crash or have a close call in the first three months after getting a license and driving independently than they were during the last three months on a learner’s permit. New teen drivers were also four times more likely to engage in risky behaviors like rapid acceleration, sudden braking and hard turns, the study, led by Bruce G. Simons-Morton of the National Institute of Health and Human Development, found.

Graduated driver licensing policies, now nationwide for new drivers under 18, can help to reduce crash rates by requiring a specific number of hours of adult-supervised driving, restrictions on driving at night and with peers in the car, and phasing in exposure to more demanding driving conditions.

“These laws can reduce fatalities among 16- and 17-year-old drivers, but they’re not well-enforced, and the rates go up once kids turn 18,” said Dr. Brian D. Johnston, co-author with Dr. Elizabeth M. Alderman of the new policy statement.

But even when graduated license policies are enforced, Dr. Simons-Morton’s research showed, “crash rates are dramatically high in the early months of independent driving.” As he and his co-authors pointed out, “It may take only a few hours behind the wheel for most novices to develop reasonable vehicle management skills, but safe driving judgment, as with all complex activities, comes only with experience.”

Therein lies the Catch-22: New drivers are more likely to get into trouble because they lack experience, but the best way to reduce the risk of a crash is to become an experienced driver. Dr. Alderman, an adolescent medicine specialist at Montefiore Medical Center, suggested in an interview that even after a teenager is licensed to drive independently, wise parents can mitigate risks by continuing to supervise driving in a variety of venues until teen drivers are more experienced.

Actually, the parents’ role in rearing safe drivers starts long before children can see over the steering wheel. “Parents need to be role models,” Dr. Alderman said. “Always fasten seatbelts, never text while driving, and never drink alcohol or smoke weed and then get behind the wheel.” To which I would add, parents should model safe driving habits by not speeding, tailgating or cutting in and out of traffic.

These days the most common risk facing young drivers involves distracting devices. A mere four seconds with eyes off the road vastly increases the chance of an accident. Using camcorders, the Teen Safe Driver Program revealed that three-fourths of moderate-to-severe rear-end crashes among teen drivers involved distracting behaviors, most often the use of cellphones. The teenage driver showed no response to the impending crash in half of cases in which the driver was using a phone.

“Teenage drivers have the highest rate of distraction-related fatal crashes of all other age groups,” Dr. Simons-Morton reported. And the temptations keep growing, with in-vehicle information and entertainment technologies and portable electronic devices of which teens are usually the earliest adopters.

“There are three kinds of distractions: visual, cognitive and manual,” Dr. Johnston said. “Electronic technology is all three of these, and the risk of a crash goes way up.”

Although alcohol as a factor in teen driving fatalities has declined in recent decades, “the use of alcohol by an adolescent driver remains a serious risk factor for motor vehicle crashes and resultant fatalities,” the pediatrics report states. In 2015, 16 percent of teenage drivers involved in fatal crashes had a blood alcohol level of 0.08 percent or higher, and 64 percent who were killed in alcohol-involved crashes were not wearing seatbelts.

All states now have a “zero-tolerance” law stating that a blood alcohol level of 0.02 percent or more for young drivers constitutes drunken driving and can result in an automatic suspension or loss of their license.

Sleep deprivation is becoming a more common risk factor for crashes by teenage drivers. Insufficient sleep not only increases the risk of falling asleep at the wheel, it impairs attention and judgment. Schools and parents can do more to assure that teenagers get enough sleep.

Parents should also think twice about the cars teens are driving. Though the tendency may be to provide an old car lest a new one get banged up, teens may be better off with a newer vehicle equipped with the latest safety features, like signals for lane departures and approaching vehicles and self-braking in an impending crash. Dr. Johnston suggests that parents “pick the safest, most up-to-date car you can afford.”

Parents might also consider creating a teen-driving contract that spells out the expectations, responsibilities and risks for the teen driver. The pediatrics society offers a prototype contract under the teen section of its website, healthychildren.org.