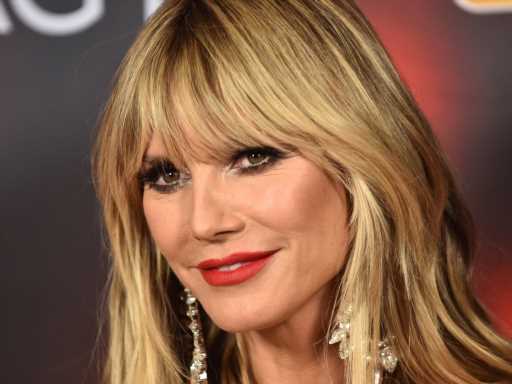 Heidi Klum does it again — another stunning photo with as little clothing as possible — and she looks amazing. The supermodel has been overseas filming the latest season of Germany’s Next Top Model and she’s taking advantage of all of the scenic moments.

Her most recent Instagram photo showcases a stunning Mykonos, Greece sunrise with its amber hues and puffy clouds, but we don’t think that’s what she wanted us to look at. Klum is seen with a towel wrapped around her head and waist, her hands covering her eyes and her elbows hiding her nipples in this dramatic photo. She captioned the image, “Sunrise Mykonos
it’s soooo pretty.”

This latest nude photo shouldn’t come as a surprise to anyone who follows the America’s Got Talent judge regularly — she feels comfortable in her skin. “I grew up going to nude beaches with my parents, so I’m a nudist,” Klum revealed to Ocean Drive magazine in 2016, via HuffPost. “I have no problems with nudity at all. I’m very free. When I go to the beach, it’s in a very remote place where there are not a lot of people, and I like to go topless.” She’s sticking with that mission five years later because it looks like she and husband Tom Kaulitz, who is with her in Greece, were the only two to see her topless moment.

And we know this won’t be the last time we see Klum naked or topless because she’s happy to share those private in-person moments with all of her followers. “I feel comfortable and don’t care if someone sees my nipples necessarily — it’s OK to see the nipple,” she explained. “But not everyone feels comfortable with that.” She believes that “everyone should do what they want to do,” but we have a feeling none of her fans are complaining.

Before you go, click here to see which other stars got naked on camera.