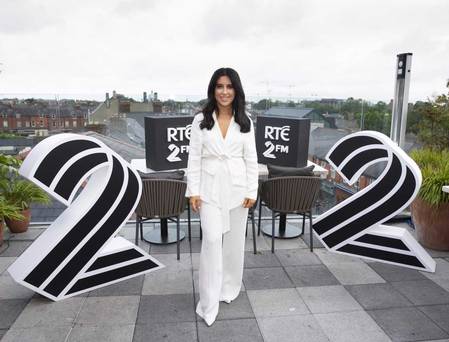 Today marks the 40th anniversary of RTE’s youth station 2FM and, to celebrate, the ‘Ryan Line’ will once again be broadcast on the station at 9am.

The late Gerry Ryan drove the success of the station over the course of two decades at the helm of his morning show from 1988 until his death in 2010.

This morning’s special hour-long segment pays tribute to his enormous talent and is introduced by his daughter Lottie.

Lottie, an entertainment reporter on 2FM, has revealed that she was “taken aback” on hearing the tribute for the first time. “When I first heard it I was taken aback,” she told Independent.ie at the unveiling of 2FM’s new schedule on the eve of the anniversary.

“I didn’t cry but I did catch my breath and I’m not like that.  I’ve got quite a black sense of humour about these things.  I’m quite dark, but it did catch me off guard.”

The segement was put together by 2FM presenter Jay Hartigan and RTE Gold’s Will Leahy, who both approached Lottie and the Ryan family a year ago to ask permission to feature Gerry.

“They put a huge amount of work into what they’ve done,” added Lottie, who says she is particularly proud of her father’s legacy having heard the segment. “It really made me go, ‘Holy s***, he was ahead of his time.  [Jay and Will] approached me about it last year nad we gave them the go ahead because I think dad would have loved it, but hearing it was like woah, holy s***, he really went for it.  It’s amazing.”

Gerry Ryan hosted his hugely successful morning talk show from 1988 up until his death in April 2010.  It was never moved from its slot despite several schedule shake-ups.

Lottie has survived the most recent shake-up and will continue as entertainment reporter on 2FM, although she is working a later shift so she’s happy to get her “lie ins back”.

Having worked on Breakfast Republic for two years, she says she was not disappointed not to become a main presenter on the new incarnation of the breakfast show, which will be hosted by Doireann Garrihy and Eoghan McDermott.

“I understand how this business works.  It’s swings and roundabouts.  Change is good.  It’s not good for anyone to be in the same position for too long.”

Lottie will feature on Jennifer Zamparelli’s new talk show, which will broadcast from 9am to 12pm daily.

“I haven’t been in contact with the afternoon listener for a while so I think I’m being put into a very nice position to say hello to them again and get ready for the future. I am excited about what the next chapter is.”

Read more: ‘It just didn’t suit the rest of my life’ – Jenny Greene reveals reasons behind 2FM departure and return