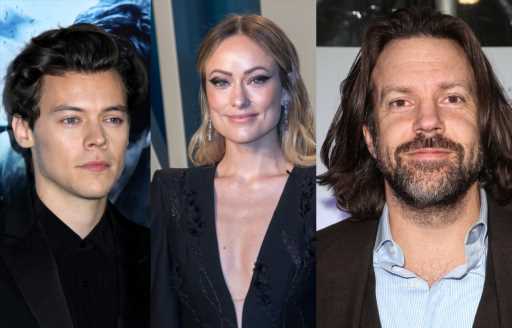 Olivia Wilde and Harry Styles’ relationship is one we certainly didn’t see coming, and apparently neither did her longtime fiancé Jason Sudeikis. Previous reports shared that Wilde and Sudeikis split in early 2020; however, it’s beginning to seem more and more likely that things might be more complicated than we originally believed. The couple of seven years share two children and were apparently on great terms as of last fall (at least, that’s what the Ted Lasso star thought). Now, new sources from Page Six have shared that Styles might have played a huge role in their decision to go their separate ways.

Yep, according to new sources from the outlet, Styles and Wilde may have begun their flirtation as far back as October. Additionally, Wilde and Sudeikis are now said to have actually split in early November. “Olivia and Jason were having issues, like any other couple, but Jason loves Olivia — he completely adores her, and that’s what makes this so sad,” the outlet’s insider said. “He’s always been committed to making their family work.”

Filming for Don’t Worry Darling commenced in September, which means that it was only a month later that things started to heat up for Wilde and Styles on set. The sources continued to share that Sudeikis was completely blindsided by Wilde’s new relationship and that the two had actually just purchased a home in the UK, which is where Sudeikis is currently filming.

“People have tried to make out that Harry and Olivia have only been dating for the past few weeks, but that’s not right,” the Page Six source added. “Jason found out about Harry and pushed the conversation. Olivia then asked for a separation and news of the split was made public.”

As for the quickly developed romance between Wilde and Styles, a source from People said, “Everyone saw it coming. During breaks, he’s hasn’t been able to stay away and visited her trailer.”

Look, we’re certainly not here to make any claims about the real reason Wilde and Sudeikis split, but we will say that this timeline is getting more and more complex.

Before you go, click here to see all the celebrities who are dating or married to older women.