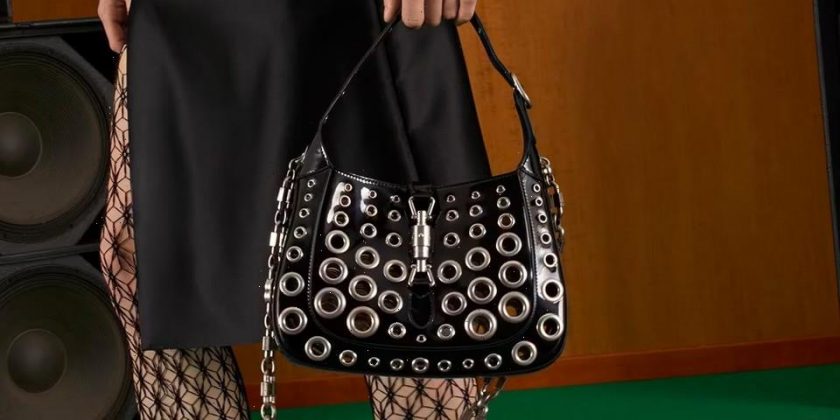 Alessandro Michele knows his references: from Stanley Kubrick films to adidas’ heritage, the designer has it all covered — but his understanding of Gucci‘s archives is second to none. For Fall 2022, the luxury house presented its full adidas collaboration as a part of the “Exquisite” collection, coming together for something indebted by sporting undertones and packed with punk sensibilities, in turn creating masterpieces like these two takes on the Jackie 1961 bag.

Coming in black patent leather or smooth brown leather, the Jackie 1961 (earning its name from both its Jackie Kennedy co-sign and its revival that added the year onto its title) now gets a punk makeover thanks to plenty of piercings. Albeit not so literally pierced, the bag is covered in a variety of differently-sized metal holes, almost like rivets puncturing the leather base.

The subversion of such a historical style is something Gucci has become accustomed to as of late, taking classic pieces and giving them a new — or referential — twist. However, it remains in its seminal shape, sporting an easy-to-carry crescent design with a shoulder strap (per a rather blingy GG-motif metal chain) and a handle for hand-held moments alongside the chrome holes.

Gucci’s punk piece goes to show that, while styled as a womenswear bag, it too can be a menswear accessory — as shown on the runway alongside the customized Bamboo bag and other leather styles from the house. Take a look at the Jackie 1961 offerings above, and purchase them on Gucci’s website and in its boutiques worldwide now for $6,000 USD apiece.

In other news, here are eight more drops that you don’t want to miss this week.
Source: Read Full Article