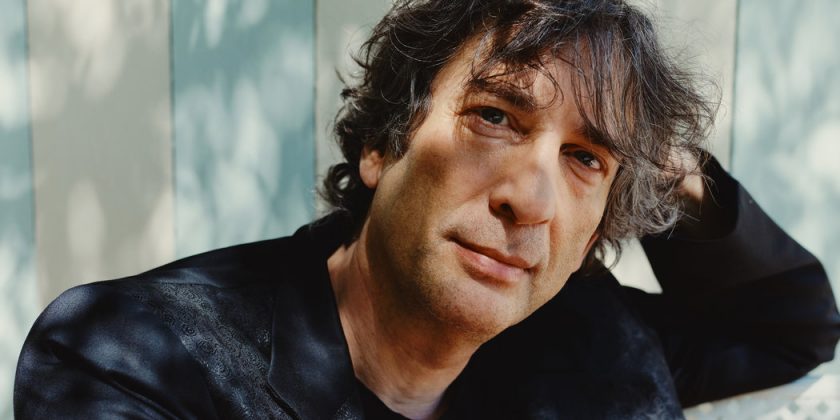 LONDON — On a cold, damp day in December 2017, angels and demons were abroad in a sprawling South London park. The Archangel Gabriel jogged in a light gray tracksuit and two lesser mystical beings argued in a Victorian bandstand.

The schoolboys playing soccer nearby didn’t notice this earthly host and the passing dog-walkers ignored them. But in the video village a few yards away, a fleece-jacketed film crew saw what they had made, and, behold, it was good.

To be precise, it was “Good Omens.”

It took nearly 30 years of misfires, false starts and tragedy, including Pratchett’s death in 2015, for “Good Omens” to reach the screen.

The upside is that this fantastical six-part adaptation, which stars Michael Sheen (“Masters of Sex”) as Aziraphale and David Tennant (“Doctor Who,” “Gracepoint”) as Crowley, with Jon Hamm guest-starring as Gabriel, is arriving at a time in which television’s ambition has caught up with that of the story. Either God moves in mysterious ways, or the gods that govern television do.

“What we’ve got is a great big sprawling six-part movie with 300 different characters, and every scene is in a different place,” Tennant said in his trailer, after filming Crowley’s outburst. “Even if it’s just Michael and I talking on a park bench, we’re on a park bench surrounded by Victorian dinosaurs.”

The novel, which debuted in 1990, is in the vein of Douglas Adams’s “The Hitchhikers Guide to the Galaxy,” except that instead of riffing on science-fiction tropes, it pokes geeky fun at “The Omen” and the Book of Revelation. 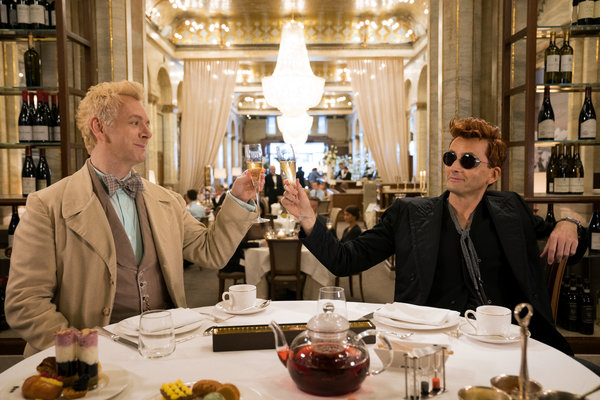 “Good Omens” establishes that Aziraphale and Crowley have been on Earth for millenniums, luring its inhabitants toward salvation and damnation, respectively. Now, though, their time is almost up. A war between Heaven and Hell is brewing; Judgment Day is just a week away. But like a pair of John le Carré undercover agents who have grown too comfortable in their assumed identities, the angel and the demon realize that they quite enjoy living with the human race, so they team up to find the Antichrist and postpone the end of days.

The author pairing was equally auspicious. Gaiman has written beloved fantasy stories in just about every medium there is, including comics (“Sandman”), novels (“American Gods,” “Coraline”), children’s books (“The Wolves in The Wall”) and screenplays (“Beowulf”). Pratchett wrote the best-selling “Discworld” series of Tolkienesque comic novels.

Sure enough, “Good Omens” earned rave reviews across the board — almost. More than 27 years later in Battersea Park, Gaiman can still quote from memory Joe Queenan’s review in The New York Times, which argued that “Good Omens” was more than unfunny — it was proof that the British are intrinsically humorless. Readers disagreed.

“When we wrote the book, all the trouble was happening with ‘The Satanic Verses,’” Gaiman remembered, referring to the Salman Rushdie novel that prompted Iran’s Ayatollah Khomeini to call for the author’s murder, sending him into hiding. “Terry did wonder whether we would have to find out if Salman Rushdie had a back bedroom.”

“But in fact,” he added, “what we got was an enormous amount of love.”

A film was the obvious next step. Or so it seemed. Gaiman and Pratchett quickly drafted a screenplay, but neither was happy with it. A decade later, Terry Gilliam, the director of “Brazil” and “13 Monkeys,” had a crack at it. He cast Johnny Depp as Crowley and Robin Williams as Aziraphale, and flew to Hollywood to find a distributor in early 2002.

Another decade later, Terry Jones announced that he would shepherd “Good Omens” onto television, thus making it the only novel to have had two members of Monty Python (and three people named Terry) play key parts in developing its screen adaptation. But when Jones’s iteration fell through, it was left to the original Terry — Pratchett — to ensure that a TV series would go ahead.

But in 2007, he was diagnosed with early-onset Alzheimer’s disease. By 2014, the condition he called “the Embuggerance” was so severe that he sent Gaiman a letter.

“We’d been friends for 35 years,” Gaiman said, his voice thickening. “He said: ‘I’ve never asked you anything before, and we’ve always agreed that with anything related to “Good Omens” we either do it together or we don’t do it. But you have to do this. No one else can do it. I know how busy you are, but I want to see this before I can’t see anything.’”

Pratchett died in 2015, a week before Gaiman planned to begin writing. “So I started in a not-funny frame of mind,” he said.

Nonetheless, he completed the scripts for a six-part series. They included a nuclear power plant, the Garden of Eden and the lost city of Atlantis. The plot spanned the globe and encompassed the whole of human history. The cast of characters included Shakespeare, Satan and the Four Horsemen (or rather, Motorcyclists) of the Apocalypse.

In other words, there was no way that Britain’s state broadcaster, the BBC, could afford to produce it. But, lo, a miracle occurred. In 2016, a new law allowed the BBC to collaborate with commercial competitors for the first time, enabling Amazon to cover 70 percent of the “Good Omens” budget. Gaiman saw this partnership as being almost as unlikely as Crowley and Aziraphale’s.

“On the one hand, you have a Kafka-esque organization” like the BBC, he said, “and on the other you have the Wild West” of Amazon, he said. “And they have to learn to play well together.”

Whatever your views on divine providence, it could be for the best that the adaptation comes at a time when television series can be as expensively spectacular as Hollywood blockbusters, while also being several hours longer.

“I think in deciding to adapt this book, there had to be the opportunity to give it the scale and the scope that it has,” Tennant said. “There would have been no point in telling this story without that opportunity.”

Such scale and attention to detail will no doubt delight fans of the sprawling, fanciful novel, especially after 30 years of waiting for it to reach the screen. “People who love the book love it with a passion,” Tennant said. “It’s our responsibility not to mess it up.”

This responsibility goes beyond just doing right by the novel’s fans, he added. “There is a real sense that Neil is keen to honor Terry’s memory.”