‘Go Back to Canada’

The House of Representatives voted this week to condemn President Trump’s recent statements about four nonwhite Democratic lawmakers as racist (he told them to “go back” to where they came from). Republicans complained that the resolution, the first House rebuke of a president in more than a century, violated congressional rules of decorum by impugning Mr. Trump’s motives.

“Well, I say if it walks like a duck and quacks like a duck, it probably just told the geese to go back to Canada.” — STEPHEN COLBERT

“They had a vote. And by the way, there will be another vote on whether the president is a racist November 3, 2020. We’re all invited to vote on that one.” — JIMMY KIMMEL

“Few Republicans spoke out against Trump, including four out of 197 who condemned his remarks in a House vote. So most House Republicans are A-OK with racism, which is great news if Biden is elected, because at least he has a history of working with segregationists.” — SAMANTHA BEE

“Now all the Democrats voted for the condemnation, along with four Republican representatives: Fred Upton of Michigan, Susan W. Brooks of Indiana, Brian Fitzpatrick of Pennsylvania and Will Hurd of Texas. Or as they will soon be known, [imitating Trump] ‘Freaky Fred, Lazy Susan, Bitchy Brian, and I’m going to guess the black guy is Frederick Douglass? I don’t know.’” — STEPHEN COLBERT

“It’s the first time it’s happened since William Howard Taft. When he heard that, Trump was like, ‘Wow, what did he tweet?’” — JIMMY FALLON

“So, after day four of Go-Home Gate, we are no closer to Republicans and Democrats agreeing on how to condemn Trump’s tweet, which was racist. But the good news is we’ve all learned something new, all of us. We’ve learned in Congress no one is allowed to call the president racist. And who knows? Who knows? Maybe someday in the future they will write another rule that says that the president isn’t allowed to be racist.” — TREVOR NOAH

“FaceApp, the app that lets users see themselves as old people and the reason why your Instagram now looks like Tinder at a nursing home.” — TREVOR NOAH

“Bravo, Russians, you’ve done it again. Honestly, I should have known something was up when the app asked me for access to my camera, my location and any photos of me getting peed on.” — TREVOR NOAH

“Who needs FaceApp when you have Trump for a president?” — SETH MEYERS

“If you want to see what you’ll look like old, just have children.” — JIMMY KIMMEL

Billy Eichner, Adam Scott and Tig Notaro are among the celebrities who surfaced in Conan O’Brien’s lost audition tapes for “Indiana Jones.”

Eichner will stop by “Jimmy Kimmel Live” to talk about his role as Timon in the new live-action version of “The Lion King.” 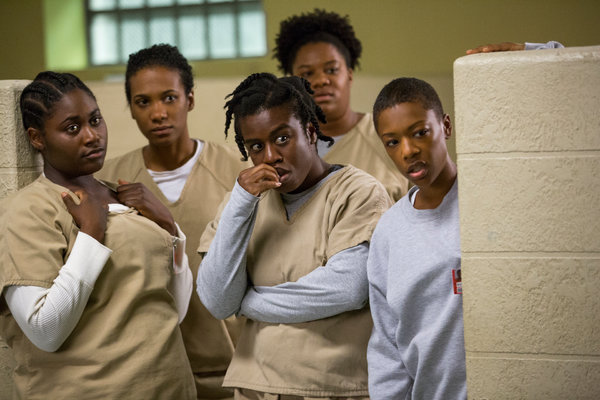 With the seventh and final season of “Orange Is the New Black” about to be released, we look at how Netflix changed television with its move to original programming.