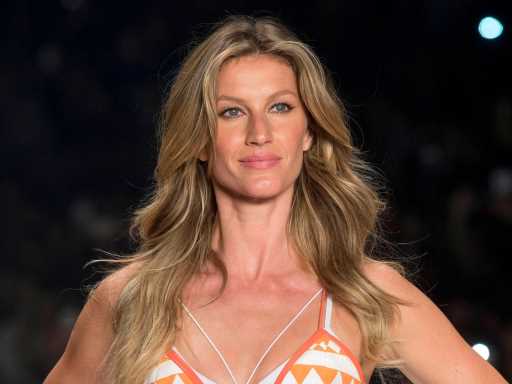 Gisele Bündchen and Tom Brady’s kids are growing up so quickly! After recently celebrating daughter Vivian’s ninth birthday, the supermodel is honoring her oldest child, Benjamin, on his 12th birthday with sweet photos that show a special relationship between a mother and a son.

The first image shows them in a warm embrace as the waves crash around them on the beach. (See the photos HERE.) Benjamin has his eyes closed while mom gives him a loving kiss on his forehead. The second photo shows the tween walking away from the waves and looking off in the distance in his blue-print swim trunks — he’s at that stage of life sandwiched between being a boy versus a young man. Gisele seems to sense that her son is about to blossom into a teen in her caption. “Happy birthday my sweet Benny! You are growing up way too fast,” she wrote in the post in both English and Portuguese. “I am so proud of the kind and loving boy that you are and I feel so lucky to be your mamma. Love you sooooo much!”

Tom opened up about Benjamin in 2019 when he realized his middle child wasn’t athletic like his oldest son, Jack Moynahan, from his relationship with actress Bridget Moynahan. “When Benny came along, I thought he would be just like Jack… [who] is just like me,” Brady told Men’s Health. “So I was like, ‘C’mon, let’s do this.’ And he was like, ‘Nope.’ And I was like, ‘What? No, do this!’ [And Gisele kept] saying to me, ‘Would you effing understand that your son is different?’”

The couple hasn’t shared what Benjamin is interested in as a middle schooler to the public, but it’s clear they place family above everything else. Whatever their 12-year-old decides to do, he’s going to be supported by his adoring mother and father.

Before you go, click here to see our favorite photos of Tom Brady hugging his kids on the football field.