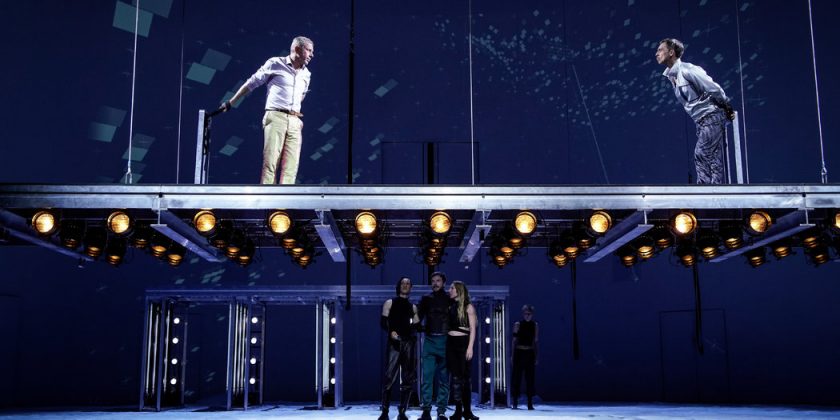 BERLIN — In Germany, with its lavish public support for the arts, going to the theater can seem like a civic duty.

In Andres Veiel’s “Let Them Eat Money. Welche Zukunft?!” at the Deutsches Theater Berlin, the audience showed its support with more than just its taxes: The play, a speculative look at a coming financial and political crisis that it predicted would hit Europe in the next decade, was created with input from the public.

“Let Them Eat Money. Welche Zukunft?!,” the last part of which means “Which Future?!” in German, is a collaboration between the Deutsches Theater and the Humboldt Forum, a new museum that will be housed in a rebuilt palace in the center of Berlin. The production grew out of a series of workshops and a symposium whose goal was to plot a credible path for European history to take over the next 10 years. Thirteen academics and 250 participants were invited to imagine that a global crisis would hit in the year 2026, and asked to construct a plausible chain of events to explain it — and, ideally, to work out how to avoid it.

In Mr. Veiel’s production, Italy’s departure from the European Union in 2023 leads the rest of Europe to introduce a basic universal income, a well-intentioned yet unsustainable measure that further plunges the continent into chaos as the euro loses its value and is replaced by shady cryptocurrencies.

A gang of hackers and social justice crusaders decide to kidnap the politicians who pushed through the disastrous policies that led to the collapse, intending to hold them to account. The vigilantes stream the interrogations online to try them in the court of public opinion.

The script by Mr. Veiel, a noted filmmaker, and his collaborator Jutta Doberstein does a fine job dramatizing the complex ideas developed during the workshops, explaining complex hypothetical economic and political scenarios in clever and nuanced ways. The tight eight-person cast spends a lot of time explaining what went wrong and how, but the fluid and sleekly futuristic staging, featuring video projections, stark lighting and some onstage acrobatics, holds the audience’s attention well.

The result is an engrossing drama that skillfully avoids preaching or propagandizing — although a melodramatic twist that comes at the very end of the evening somewhat undercuts the play’s credibility. 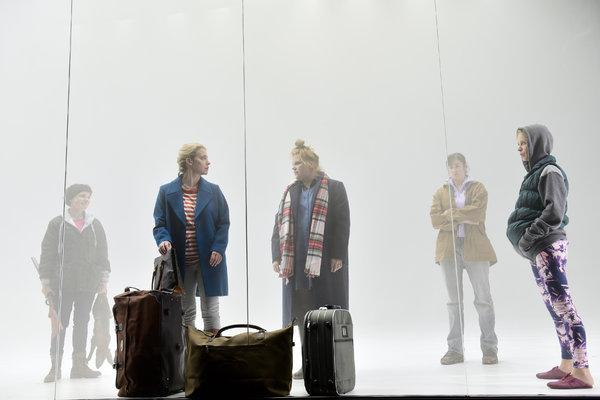 While the Deutsches Theater was conjecturing about future woes, the nearby Berliner Ensemble took a head-on plunge into present ones, with the Australian-Swiss director Simon Stone’s “Eine griechische Trilogie” (“A Greek Trilogy”), a parable of female resistance and retaliation that seems custom-made for the #MeToo age. Compared with the United States, the continuing crusade against sexual harassment has both gotten less exposure and had a more limited impact in Germany, which made encountering Mr. Stone’s enraged play here all the more surprising.

The playbill for “Eine griechische Trilogie’s” lists some classical works as inspiration: “Lysistrata,” “The Trojan Women” and “The Bacchae.” Yet whatever stimulus Mr. Stone took from those plays is virtually impossible to discern here. Instead, the writer-director furnishes a lengthy drama about several generations of mistreated women who band together for support — and ultimately vengeance — against their male oppressors.

Mr. Stone’s sensibilities are operatic (he is returning to the Salzburg Festival next summer to direct his second opera there), and the most striking thing about this production is a massive pane of glass that separates the stage from the audience. Trapped in a huge transparent cage with little else onstage, the sizable cast declaims reams of text, their voices highly amplified.

An assortment of A-list German acting talent brings Mr. Stone’s intricate though meandering text to life. The play’s dozen characters are well-drawn, although Mr. Stone is much better at providing their back stories than at propelling the plot forward, and his play grows tedious after intermission — until a spectacularly blood-soaked finale which rivals Luca Guadagnino’s new film “Suspiria” in its depiction of unbridled female fury. We walk out of the theater shocked by this lurid conclusion and uncertain whether we have just seen female bloodlust glorified or condemned.

The irreverent hashtag in the title of Yael Ronen’s “#Genesis — A Starting Point” at the Munich Kammerspiele seems to insist that the Bibilical account of creation is, or ought to be, a trending topic. In her latest work, Ms. Ronen, an innovative Israeli director, explores how origin myths, both collective and personal, help us make sense of the world and our place in it.

Her small cast enacts an elaborate chamber drama that examines how the first chapters of the Hebrew Bible contain the seeds of so many of our timeless conflicts — religious, sexual and ecological, to name just a few.

As in Ms. Ronen’s first outing here, “Point of No Return,” a harrowing look at how people react to terrorist attacks, inspired by a shooting spree at a Munich shopping mall in 2016, much of her new show is built around autobiographical monologues. “#Genesis” folds these narratives of personal struggle and growth into its quirky retelling of the biblical creation.

The actor Jeff Wilbusch leaves the most poignant impression in a moving series of monologues about his painful adolescent separation from his Hasidic family in Israel. The Kammerspiele’s sensational actress Wiebke Puls, usually tough as nails, shows a vulnerable side as she opens up about her estranged father, a minister who couldn’t bear to see his little girl grow up.

The transitions between these interior moments and colorful, often irreverent recreations of biblical scenes are occasionally awkward, and the performances from the rest of the cast are not equally fleshed out. As the six actors discuss original sin; Adam’s first wife, Lilith; the killing of Abel; and so on, they lay much of their bitterness, resentment and anger at the feet of a not-so-benevolent creator. “God didn’t leave us,” runs one of the more charitable explanations for divine neglect. “He just wanted to see other people.”

And lo, God answers the accusations in a furious monologue that is at once screamingly funny and unexpectedly poignant. Samouil Stoyanov, one of the Kammerspiele’s most exciting actors, practically foams at the mouth as he yells at Adam, Eve, Lilith (and even the Serpent) to stop blaming the Almighty for humanity’s own failings. “I’ve given you paradise and you don’t even realize it,” shouteth the Lord.

Though Mr. Stoyanov’s speech stops short of an environmental message, the implications are impossible to ignore. We have not been exiled from the garden; we have let it go to seed.

Before we are introduced to these personal and cosmic narratives, Ms. Ronen forces her audience to confront another troubled beginning: one at the theater itself, where the Kammerspiele’s artistic director, Matthias Lilienthal, has weathered a storm of controversy since his arrival in 2015. In a 20-minute-long jeremiad, the Australian actor Damian Rebgetz, a valuable ensemble member here, hisses at the conservative public that has opposed Mr. Lilienthal and the experimental, politically provocative productions that he has presented here.

Mr. Rebgetz’s colorful English-language screed mixes self-deprecating humor with rage and disgust. On opening night, one smartly dressed couple left noisily after a few minutes. The thunderous applause after his tirade, however, seemed a vote of confidence for the idea of the theater as a place to go not merely to be entertained, but also to grapple and engage with the issues that shape our world.