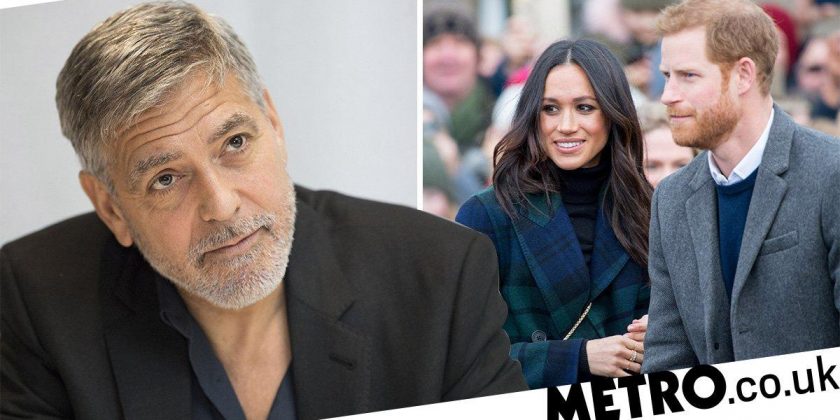 George is dad to one-year-old twins Alexander and Ella, who he shares with Amal.

While he might not be Archie’s godfather, he and the royal baby do share one thing in common – their day of birth.

Yup, little Archie (full name Archie Harrison Mountbatten-Windsor) was born on George’s birthday, 6 May, and actually, the Ocean’s Eleven star isn’t so thrilled to be sharing his birthday.

Speaking to ET, George said: ‘It was a little irritating, because that kid really is stealing my thunder! This was my day! I was sharing it already with Orson Welles and Sigmund Freud.’

George’s comments come as the nation reacts to Harry and Meghan naming their baby boy, with Piers Morgan fuming that his name was a ‘striking blow for feminism and diversity’.

He tweeted: ‘So the royal couple, in a striking blow for diversity & feminism, have given their son one of the most popular white middle-class first names, Archie, and a second name, Harrison, that was chosen because it stands for ‘Harry’s son’ (I’m serious..). Hilarious.’

Baby Archie was officially introduced by the royal family’s official website two days after his birth, but was awkwardly introduced as the first child of the Duke and Duchess of Cambridge – otherwise known as William and Kate.

Luckily for him, his adorable first photo with mum and dad was a much needed distraction.

MORE: Ben Shephard can’t take part in Strictly Come Dancing because ‘wife doesn’t want him to have an affair’