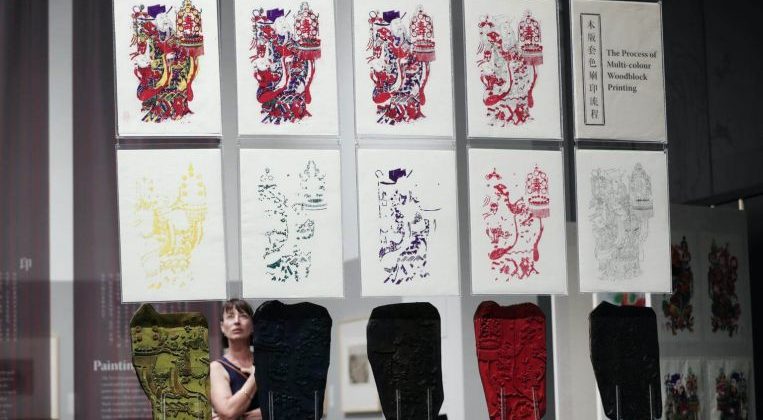 SINGAPORE – About 170 works of folk art from China, created from the 17th century to the present day to celebrate Chinese New Year, are on display at the private Parkview Museum in North Bridge Road and the China Cultural Centre in Queen Street.

The exhibitions in both locations run until April 12 and mostly showcase woodblock prints, often with hand-painted elements, from the collection of the National Art Museum of China (Namoc). The joint showcase is organised by Namoc, in collaboration with Parkview Museum and the China Cultural Centre.

The China Cultural Centre opened in Singapore in November 2015 and is one of about 20 built by the Chinese government around the world to promote its culture and bolster its soft power abroad. There have been two prior exhibitions at the centre showcasing contemporary artwork from Namoc, but this is the first joint showcase with another museum here.

The Parkview Museum hosts the bulk of the art on loan from the Chinese museum: 127 works from the town of Yangliuqing in Tianjin, which is historically known for its exquisite woodblock prints. The showcase is titled Breezing Willow, in homage to the lush willows Yangliuqing was famous for.

The works on display range from pieces nearly 400 years old to one dating to 1912 and showing an airship.

Namoc director Wu Weishan curated both exhibitions. He says in a media statement that the fashion of creating art for Chinese New Year started in the mid- to late Ming Dynasty era (the 16th century) and was developed and refined during the Qing Dynasty era which followed.

New Year artwork from Yangliuqing was especially “renowned for their exquisite engravings, delicate colourings, rich diversity of styles as well as huge influence” on artists from other regions. Works from that town were popular gifts for the ruling emperor.

The high-quality woodblock prints look deceptively like paintings, though only certain elements were actually hand-painted. These include facial tones or delicate embroidery on clothing.

The process of creating the woodblocks is demonstrated in a multimedia installation at the Parkview Museum.

The prints and paintings have been grouped according to theme, showing how early Chinese New Year artwork showed door gods or gate guardians, which were put up in front of the home as protection against evil. Other themes became popular in later decades, such as scenes from legends, operas or even novels such as the 18th-century classic, Dream Of The Red Chamber.

The exhibition at the China Cultural Centre, titled Auspicious Blessings For The Chinese New Year, showcases 40 works from historic times to the present day. These range from Qing Dynasty embroidery hangings or woodblock prints created in different parts of China to paper cut-outs by contemporary Chinese artist Gao Fenglian. Popular subjects include household gods and scenes of family life, showing a desire for prosperity and children.

Curator Wu says: “Though varied in cultural patterns and artistic styles, these works share one theme in common, that is people’s longing for a better life, both in the past and at present.”

BOOK IT / AUSPICIOUS BLESSINGS FOR THE CHINESE NEW YEAR

WHEN: Until April 12, Tuesdays to Saturdays, 11am to 5.30pm. Closed on Mondays and public holidays

Folk art celebrating Chinese New Year started with paintings or woodblock prints of these legendary figures. The art was placed in front of the home in order to protect against evil.

From the 18th century, during the reign of Emperor Qianlong of the Qing Dynasty, Chinese New Year art from Yangliuqing became so famous that shops specialising in woodblock prints would offer first editions of their best work to the royal family as tribute. Such prints were often rich in visual detail, with painted additions. This hand-painted woodblock print illustrates a scene from the classic novel Dream Of The Red Chamber and dates to the late 18th or early 19th century.

When Emperor Qianlong died in 1799, his son and successor Jiaqing decreed a period of state mourning. It was forbidden to play drums and gongs and also to use red and purple in Chinese New Year prints and paintings. Works from Yangliuqing relied heavily on shades of blue.

This hand-painted woodblock print shows a scene from the life of legendary philosopher Mencius. His mother cut the cloth she was weaving to symbolise how wasteful it would be if her son did not further his studies.

FISH IN A JAR

This fish-in-a-jar motif is unique to Chinese New Year art from Yangliuqing. The words for “lotus flower” and “swimming fish” when combined are homophones for the phrase “years of abundance”. This painting dates to the reign of Emperor Guangxu, whose short-lived reign in the 19th century was curtailed by the Dowager Empress Cixi.

This woodblock print dates to 1912, the year the Republic of China was established. The relatively new technology of the airship became a popular subject in Chinese New Year art from 1911, when a French aviator brought two airplanes to China for a demonstration.