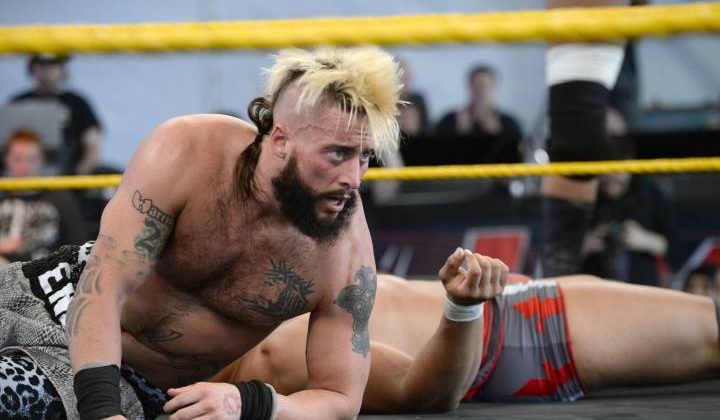 Former World Wrestling Entertainment Inc. (WWE) wrestler Enzo Amore was forcibly removed by security at the Staples Center in Los Angeles on Sunday night after attempting to cause a distraction during the Survivor Series event.

Amore, whose real name is Eric Ardnt, was wearing a hoodie and appeared to be disguising himself. He also wore a black wig to cover his bleached blonde hair.

During the Authors of Pain versus The Bar tag team match, he removed his hoodie, stood on a chair and chanted several of his catchphrases from his time working in wrestling for WWE.

Many fans noticed Amore’s disguise in the crowd.

Amore was quickly escorted out of the Pay-Per-View event by security. There are reports that he’s been banned from future WWE events.

WWE Superstar Liv Morgan tweeted after Amore was kicked out of the Staples Center.

Amore made headlines last week after being kicked off a Delta flight for vaping.

The former wrestler had been allegedly vaping onboard the plane and another passenger filmed him being ejected from the plane before take-off.

Amore made reference to the vaping incident in a tweet on Nov. 18, writing “Apparently you can’t vape inside the staples center. #HowYouDoin!?”

In January, Amore was fired by the WWE after a woman alleged on Twitter that he raped her and police opened a sexual assault investigation.

WWE suspended him on Jan. 22, noting that they have zero tolerance for matters involving sexual harassment or assault.

“WWE has zero tolerance for matters involving sexual harassment or sexual assault,” the organization said in a statement provided to CBS Sports. “Until this matter is resolved, Eric Arndt (aka Enzo Amore) has been suspended.”

A lawyer representing Arndt said he denied the accusations and is cooperating with authorities.

The woman who made the accusation shared a graphic account on Twitter, saying she was plied with drugs and left alone with the wrestler by his friends.

No charges were filed in the incident and authorities cited a lack of evidence.

WWE has not commented on Amore being removed from the Staples Center as of this writing.