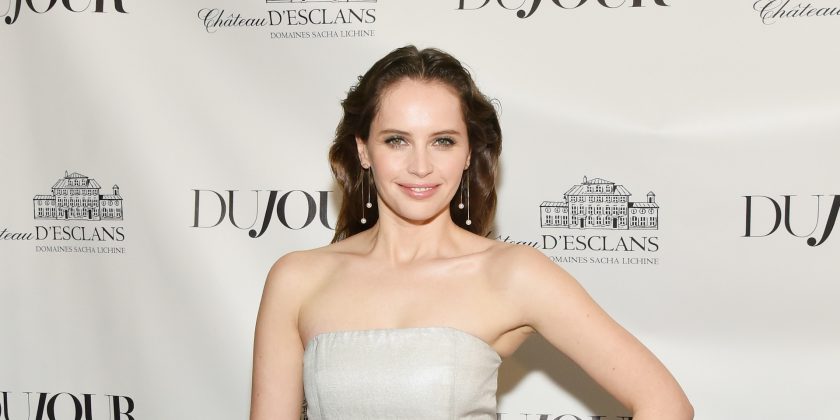 It’s not an easy feat for an actor to step into the shoes of a celebrated icon. But Felicity Jones is no stranger to taking on riveting roles that run the genre gamut — she played a Star Wars heroine in Rogue One, Jane Hawking (wife of Stephen Hawking) in The Theory of Everything and a doctor in the thriller Inferno. Now, she’s portraying Supreme Court Justice Ruth Bader Ginsburg in the upcoming biographical drama On the Basis of Sex, which follows Ginsburg’s early professional endeavors, from her days at Harvard Law School to her crusade against gender discrimination.

What does Felicity Jones feel people should take away from her latest film? SheKnows caught up with the actor at Catch NYC on Monday at a celebration for her DuJour magazine winter issue cover, and she filled us in on why she thinks On the Basis of Sex is so influential.

“The message of the movie is definitely that when men and women work together, we make the most effective change and, ultimately, we all rise together,” Jones told us.

And Ginsburg’s groundbreaking legacy serves as an inspiration for young women dealing with challenges standing in their way.

Jones explained, “I think you get such hope from her story because you see what she managed to achieve. She took that feeling of injustice and that annoyance and harnessed that anger into something very, very positive.”

While Jones has had an impressive career that includes esteemed accolades like SAG and BAFTA nominations and two Empire Award wins, that doesn’t mean she hasn’t encountered setbacks. Her advice for her younger self is spot-on — and obviously includes a shoutout to the Notorious RBG.

“Always keep going. Don’t let the pushbacks get you down. Just be determined. Work hard and just stay the course, like RBG,” Jones added.

In case you were wondering what Ginsburg thought of seeing her life unfold on-screen, Jones revealed the Supreme Court Justice has in fact seen the film three times at this point.

“She loves it. She’s a huge fan. She’ll telling all her friends to go and see it. If there’s one person I care about a review, it was her, so it’s just fantastic news,” Jones gushed.

For a seasoned actor like Jones, capturing Ruth Bader Ginsburg’s cadence and accent (RBG hails from Brooklyn; Jones was born in the U.K.) was all about the research. And with Jones’ preparation comes immense adoration for Ginsburg’s game-changing career.

“It was really fascinating. I listened to tapes of her in court, and it was about capturing her voice. Her voice has such power in it,” Jones noted of getting Ginsburg right. “The way she uses language is extraordinary, and she knows the value of words. That’s what is ultimately so special about her — how her words can affect change.”

On the Basis of Sex hits theaters on Dec. 25.