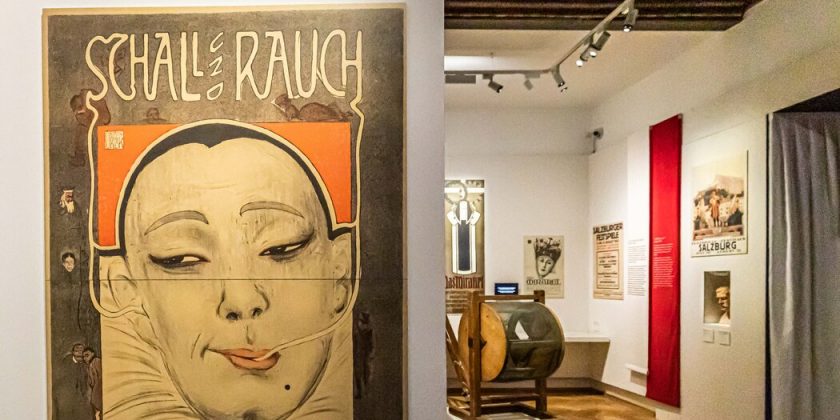 Last year, the Salzburg Festival dialed back centenary celebrations to pay tribute to its Jewish artists who were expelled or murdered by the Nazi regime.

During a small ceremony, 28 “stolpersteine,” or golden “stumbling stones,” commemorating those artists were laid on Max Reinhardt Platz, a square named for the German theater impresario and a founder of the festival who died in exile in New York in 1943.

“Everyman’s Jews: 100 Years Salzburg Festival,” an exhibit on view at the Jewish Museum Vienna until Nov. 21, shines a spotlight on many of those whose names now glisten on the square. They include singers, musicians, directors, conductors and actors who contributed to the success and international renown of the Salzburg Festival in its first two decades.

Curated by Marcus G. Patka and Sabine Fellner, “Everyman’s Jews” features objects from Mr. Reinhardt’s estate, exhibited for the first time, along with costumes, props and set designs from many of the festival’s early productions.

The exhibition and its impressively researched catalog focus not only on the Jewish artists themselves, but also on Salzburg during the Nazi period, still a sensitive topic for some. It also lays bare how the city was rife with anti-Semitism and nationalism long before World War II.

“There was much hostility against the ‘theater Jews’ from Vienna,” Mr. Patka said in a recent interview, noting the resistance Mr. Reinhardt faced in 1920 when he staged the inaugural Salzburg production of “Jedermann,” an updating of a medieval morality play by Hugo von Hofmannsthal.

The Austrian playwright, also one of the festival’s founders, was descended from an ennobled Jewish family, a heritage that sometimes made him the target of prejudice. But Mr. von Hofmannsthal was, in fact, staunchly Catholic and a fervent supporter of his country’s art.

“Austria’s unparalleled culture must be rescued,” Mr. von Hofmannsthal told the Jewish journalist Berta Zuckerkandl, famous for the salons she hosted, in 1919. Perhaps the best-connected woman in all of Vienna, she was the unsung driving force behind the Salzburg Festival.

Mr. von Hofmannsthal entreated Ms. Zuckerkandl to use her influence to promote the nascent festival. “We want to elevate Salzburg, the pearl of Austrian cities, Mozart’s birthplace, to become a symbol,” the dramatist told her. “After the empire as a political entity has disappeared, Max Reinhardt and I want at least to immortalize its soul.”

Twenty years later, after she was forced to flee Vienna, Ms. Zuckerkandl wrote, “Austria no longer exists, and the spirit of the great initiators Hofmannsthal and Reinhardt has been banished.” She died in exile in Paris in 1945.

Archival materials, including photos, artwork and documents, offer an introduction to less-familiar Jewish players, including the influential set designer Oskar Strnad; Arnold Rosé, concertmaster of the Vienna Philharmonic; the singers Rosette Anday and Claire Born; and the choreographers Tilly Losch and Margarete Wallmann.

But the show also charts the fortunes of the German and Austrian artists who profited from the cultural policies of the Nazis, including the conductors Wilhelm Furtwängler, Karl Böhm and Herbert von Karajan, all of whom enjoyed great success after the war. And the exhibition is candid about the festival’s reluctance to confront its Nazi past in the postwar period.

One of the few figures to force such a reckoning was the painter Oskar Kokoschka, when he was invited to design sets and costumes for “The Magic Flute” in 1955. According to Mr. Patka, Mr. Kokoschka refused to collaborate with Mr. von Karajan, who had joined the Nazi Party in Salzburg.

The festival instead hired Georg Solti. Mr. Solti, who was Hungarian and Jewish, later became the music director of the Chicago Symphony and was a regular presence at Salzburg, where he conducted up until a year before his death in 1997.

At the exhibition’s opening last month, Austria’s federal minister, Karoline Edtstadler, said that the Salzburg Festival’s Jewish origins were “long swept under the carpet — as so much about Austria’s Nazi past.” In a news release, she called the exhibit, which was supported by the Salzburg Festival and its longtime president, Helga Rabl-Stadler, a valuable step in showing “how profoundly Jewish life influenced Austrian history and our identity.”

The festival granted the museum access to its archives and lent most of the objects on view, which suggests a new willingness to explore the dark corners of its history. The endorsement is a far cry from the outrage that Tony Palmer’s documentary about the festival, which included Nazi-era footage, provoked 15 years ago.

Mr. Patka commended the festival for its assistance, but cautioned that not everyone in Salzburg was as willing to face the past.

“It’s much easier to talk about these topics in Vienna,” he said, and paused before adding, “I would like to bring the exhibition to Salzburg someday.”