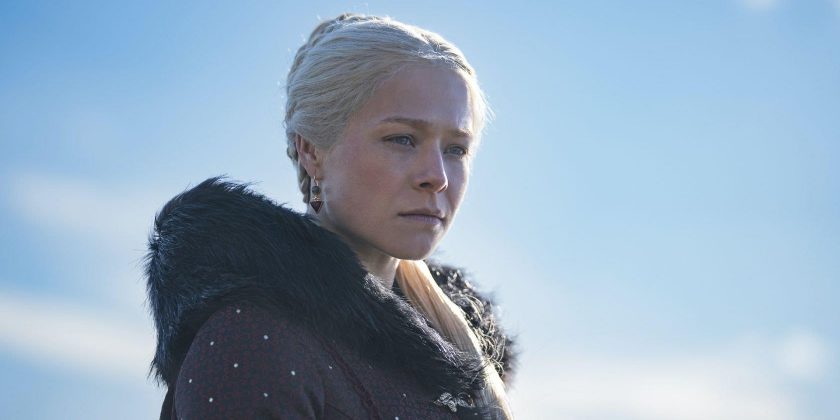 Here’s everything you need to know about the second season of HBO’s House Of The Dragon.

Warning: this article contains spoilers for the first season and finale of House Of The Dragon.

In the final episode, The Black Queen, the battle for the Iron Throne seems to well and truly be on. We knew it was coming but in the finale’s closing moments we see a darker new side to Princess Rhaenyra that will carry us into the now-confirmed second season.

Although Rhaenyra was usurped by Alicent, her former best friend-turned-stepmother, Rhaenyra remained tactical and logical till the very end – even in the midst of her own horrific experience of stillbirth – at least until her son Lucerys and his dragon Arrax were slain, somewhat accidentally, by Alicent’s cocky one-eyed son Aemond and his huge dragon Vhagar.

House Of The Dragon: Matt Smith and Emma D’Arcy as Prince Daemon and Princess Rhaenyra Targaryen.

Learning of her stepmother’s complete betrayal and public coronation of her eldest son Aegon – instead of allowing Rhaenyra, the rightful heir, to take the throne – would be enough to start up a fully-fledged war, something that Daemon is very keen to do. Instead, Rhaenyra is intent on building up allies and strongholds to ensure that her army at Dragonstone cannot easily be taken down. It’s a methodical approach, but in the final scenes, Daemon delivers the tragic news of her son’s death and with it, we just know that House Of The Dragon series two is going to be grittier and bloodier than this premiere season.

The second instalment of the Game Of Thrones prequel is in the works but when it is coming out? What will happen in it? There’s a million and one questions circulating after that finale so read on for what we know about House Of The Dragon season two so far.

House Of The Dragon: Tom Glynn Carney as Aegon.

What will House Of The Dragon season two be about?

The events in this series revolve around House Targaryen and the war of the Seven Kingdoms, taking place 200 years before Game Of Thrones. It’s based on The Dying Of The Dragons, a novella found in George RR Martin’s 2018 work Fire & Blood.

The first episode of House Of The Dragon alone smashed streaming records so it’s little surprise that it’s been renewed for a second season, ditto that the plot details for series two are being kept under wraps. But what we do know is that Lucerys’ death will likely spark a war-waging fire in Rhaenyra and that she and Daemon will exact bloody revenge upon King’s Landing and the Hightowers.

It all boils down to who will take the rightful seat at the Iron Throne and if Alicent and Otto have anything to do with it, we know it’ll be a longstanding and fierce battle.

As per The Hollywood Reporter, HBO has not confirmed how many episodes will be in the second season, but another 10 seems like a safe bet.

House Of The Dragon: Elliot Grihault as Lucerys Velaryon.

Who will star in House Of The Dragon season two?

If we saw them still alive at the end of series one then there’s a fair chance that we’ll be seeing those characters back on our screens. Of course, younger Rhaenyra and Alicent (brilliantly played by Milly Alcock and Emma Carey) won’t be returning, but their older counterparts, Emma D’Arcy and Olivia Cooke, should certainly be coming back to our screens.

We’re sure we haven’t seen the last of Daemon (Matt Smith), Lord Corlys (Steve Toussaint) and Princess Rhaenys (Eve Best) and we’ll update you with casting news once it’s confirmed.

House Of The Dragon: Emma D’Arcy as Princess Rhaenyra Targaryen.

Will the behind-the-scenes team of House Of The Dragon be returning?

“Working within the Thrones universe for the past few years has been an honor and a privilege, especially spending the last two with the amazing cast and crew of House Of The Dragon,” Sapochnik said recently. “I am so proud of what we accomplished with season one and overjoyed by the enthusiastic reaction of our viewers.”

He continued: “It was incredibly tough to decide to move on, but I know that it is the right choice for me, personally and professionally. As I do so, though, I am deeply comforted to know that Alan [Taylor] will be joining the series.

“He’s someone I’ve known and respected for a long time, and I believe this precious series could not be in safer hands. I am so glad to remain a part of the HBO and House Of The Dragon family and, of course, I wish Ryan and his team success and all the best with season two and beyond.”

This now means that Condal will become the sole showrunner for season two and will continue to work closely with series co-creator/executive producer George RR Martin.

House Of The Dragon: Matt Smith as Daemon Targaryen.

Are there any hints about House Of The Dragon season two?

Well, now that the first series is finished, Condal has been teasing more of what we can expect from the upcoming season. Speaking to The Times, he revealed that producers deliberately slowed down the narrative for the first season in a bid to ensure viewers were invested in the new characters.

He explained: “We will get to the spectacle,” he insists. “But you have to understand these people’s complexities before they’re thrown into war.

“Series two will hit the rhythms people came to expect from the middle run of Game Of Thrones, but it will have been earned, and viewers will feel the tragedies because we put the work in.”

Condal also surprisingly hinted at the possibility of some lighthearted moments in the new series too. A House Of The Dragon scene where we’re left giggling rather than gasping – could it be? Condal explained that the writers will seek to introduce “natural pathways into moments of levity” in the drama.

House Of The Dragon: Olivia Cooke and Emma D’Arcy as Alicent Hightower and Rhaenyra Targaryen.

When will House Of The Dragon season two be released?

Oh, the burning question on our lips right now. If we know anything to be true of the George RR Martin TV universe, it’s that we’re continuously kept waiting on these series.

According to The Hollywood Reporter, the first season of House Of The Dragon required 10 months of filming and a massive amount of postproduction visual effects work took several months more. So, it will be difficult for the production to film and VFX another season by the end of 2023, meaning that a 2024 return could be more likely.

We’ll be sure to keep this piece updated with House Of The Dragon season two news as and when it comes out – watch this space.

House Of The Dragon series one is available to watch on Sky and streaming service Now with an entertainment membership.