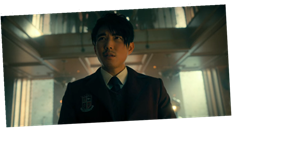 There may be space travel ahead for the Hargreeves.

It doesn’t take a time traveling suitcase to know that Netflix’s The Umbrella Academy will most likely get renewed for a third season. According to Nielsen’s TV ratings, it was the most streamed show on all platforms in August, followed only by Showtime’s Shameless and ABC’s Grey’s Anatomy.

Netflix has not yet announce an Umbrella Academy Season 3, but Season 2 sets it up for one perfectly. After stopping the apocalypse again in 1963, the Umbrella Academy siblings teleport back to 2019 and find their actions have vastly altered the timeline. Their dad and Ben are alive, and a new super-powered group — the Sparrow Academy — is calling their mansion home. Furthermore, fellow sibling Lila is out there somewhere with a Commission briefcase, and Sissy’s son Harlan still has Vanya’s telekinesis powers. Though Season 2 pretty much caught up to the comics the show is based on, these cliffhangers provide a glimpse into what to expect from a third season. Let’s run down everything we know so far.

When will Umbrella Academy Season 3 premiere?

With the ongoing coronavirus pandemic, it’s difficult to tell when a third season might premiere. Season 1 debuted in February 2019, and Netflix announced its renewal in April 2019. According to Umbrella Academy star Tom Hopper’s Instagram, filming for Season 2 wrapped in November 2019, but it didn’t air until July 2020, likely due to studio closures slowing down post-production. Toronto, where Umbrella Academy is filmed, is now allowing studios to resume filming; considering it takes about a year for Netflix shows to produce a whole season, though, we may be looking at a fall 2021 release for Season 3.

We can safely assume that all of the Umbrella Academy siblings will be back — and that especially includes Justin H. Min’s Ben, who’s now fully in the land of the living. Colm Feore’s Sir Hargreeves will also likely play a major role as the siblings continue to grapple with their childhood traumas — now face to face with the man who inflicted it. What we don’t know is if the changes the Umbrella Academy made in 1963 also means that the robot Grace and Pogo now exist again in 2019 — and if, like Ben, they’ll be very different from how we remember them.

There’s also a pretty good chance that Ritu Arya’s Lila will feature heavily in a third season. Showrunner Steve Blackman previously told Bustle that we can "expect to see [Lila and Diego] trying to find each other" because "she really does love Diego and he really loves her." Other characters introduced in Season 2, like Allison’s husband Ray and Vanya’s love interest Sissy, won’t be returning, while Blackman confirmed Kate Walsh’s Handler is really dead this time (though that doesn’t rule out potential flashbacks or more time traveling). "If we did the math, Ray would be a very old man in 2019," Blackman said. "Same with Sissy. I think these are characters we met this year, and next season, we’ll meet new people."

What is Umbrella Academy Season 3 about?

Most likely, a third season will explore what it means for the Umbrella Academy now that their father is alive and has seemingly abandoned them for his new children. Though the Sparrow Academy members appear as allies in the comics, Ben’s bad attitude suggests the relationship between the two groups may be antagonistic.

Beyond that, we don’t yet know where Blackman will take the series. Season 2 was very, very loosely based on the second volume of the Umbrella Academy comics, Dallas, and it already pulled in the big Sparrow Academy reveal from the third volume, Hotel Oblivion. Hotel Oblivion involves the siblings traveling to a prison in a pocket dimension in deep space, and in Season 2 there was a brief hint that Hargreeves is interested in something on the dark side of the moon. Does this mean we’ll see the team in astronaut gear in Season 3? Possibly. At the very least, maybe we’ll finally learn if Luther’s seemingly pointless time on the moon was actually building toward something after all.