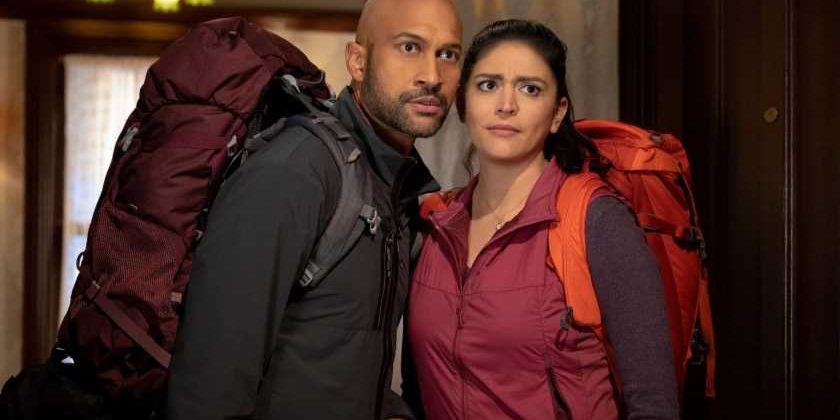 Schmigadoon! is sure to be a hit with musical junkies everywhere. Here’s what you need to know about the Apple TV+ series.

Confession time: I adore musicals to little pieces – something which my Spotify playlist, packed to the brim with rousing showtunes, makes abundantly clear every time I hit ‘shuffle.’

I love them for the sheer joy of them, for their unerring ability to lift my spirits on a bad day, and for the way they never fail to make my heart swell two sizes bigger. I love them, too, for the big musical numbers – and, sure, I’ve often thought to myself that life would be 100% better if it were scored by the likes of Stephen Sondheim, Jeanine Tesori and Andrew Lloyd Webber. So sue me.

Schmigadoon! is sure to be a hit with musical junkies everywhere.

As it turns out, the folks at Apple TV+ are also musical junkies and wholeheartedly agree with me. That, surely, can be the only explanation for their upcoming TV series, Schmigadoon! (and there’s a whole lot of pent-up Broadway energy brimming within that titular exclamation mark alone, right?).

So, what’s Schmigadoon! all about?

The comedy series starts off by treading somewhat familiar territory; Josh (Keegan-Michael Key) and Melissa (Cecily Strong) are struggling to find the joy in their increasingly stale relationship. And so, in a bid to rekindle the romance, the couple decide to go backpacking together.

Is 2021 the ultimate year for musicals? Here are all the top singalong films you have to see this year

So far, so cutesy. Here’s where things veer into Twilight Zone territory, however; it soon transpires that Josh and Melissa can’t leave the town and return to their regularly scheduled lives until they’ve found true love. Which must mean that they (oh dear) haven’t found it with each other…

Hmm. What a conundrum, eh?

Where can I watch the Schmigadoon! trailer?

You can watch the Schmigadoon! trailer for yourself below – although, fair warning, this is about to separate the hardcore musical junkies from the amateur fans.

What did we tell you? It’s packed to the brim with original songs mimicking beloved showtunes, beautifully artificial sets, knowing winks to the audience, and bucketloads of theatricality.

It is, essentially, the ultimate Marmite show; you’ll either be utterly charmed by it, à la Melissa, or instantly irritated by its seemingly endless enthusiasm (much like Josh is in the trailer). There is no inbetween.

Considering the Covid-19 pandemic has denied us all the chance to snuggle down in the worn velvety seats of an actual live theatre production for well over a year now, this writer suspects more than usual might find themselves tempted by this sugary-sweet TV offering. Only time will tell, we guess.

Does Schmigadoon! boast an all-star cast?

How has Schmigadoon! fared with TV critics so far?

As you might expect from a bonafide Marmite show, Schmigadoon! has proven divisive with critics. TV Line’s Dave Nemetz, for example, has piled praise upon it, writing: “The cast is top-to-bottom fantastic, the enthusiasm is infectious, and the sharp jabs it takes at the genre’s wheezy old clichés give it a distinctly meta edge.”

There’s no getting away from the fact that Schmigadoon! is proving a divisive show.

Variety’s Daniel D’Addario, on the other hand, wearily insists that “there’s something ineffably cringey about it, with a bit too much effort contained within that exclamation point.”

This writer, who willingly sat down and watched Netflix and Dolly Parton’s Christmas On The Square in its entirety, almost certainly isn’t the best judge of this one. But, if you’re interested, her review would most likely consist of joyful squeaking sounds and off-tune humming.

When does Schmigadoon! become available for streaming?

The six-part series will drop on Apple TV+ worldwide on Friday 16 July.