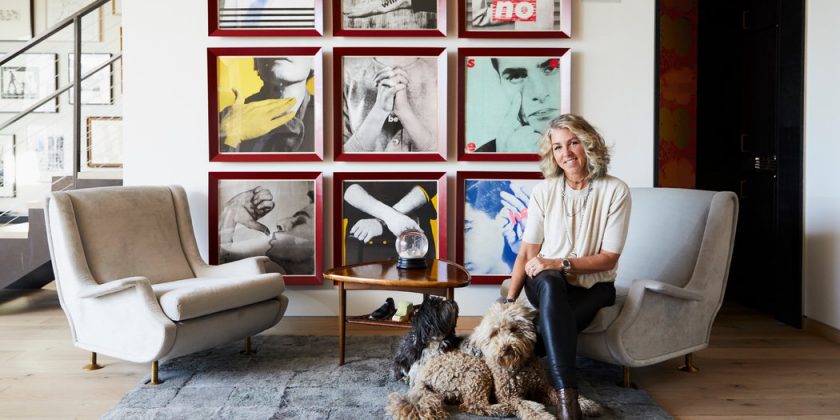 “For the first time in 28 years, I’ve had three months without a school and sports schedule to deal with,” Stephanie Ingrassia, vice-chairwoman of the board at the Brooklyn Museum, said recently in an interview at her home.

With three of their four children grown, and the one in high school studying away this semester, she and her husband, Tim Ingrassia, co-chairman of global mergers and acquisitions at Goldman Sachs, recently sold their stately townhouse in Brooklyn Heights to the actress Jennifer Connelly. They moved to a condo, with panoramic views of the East River and Lower Manhattan, in Pierhouse at Brooklyn Bridge Park. Their glass-faced duplex, while plenty spacious by New York standards, is a substantial downsize with far less wall space for their contemporary art collection, which numbers in the hundreds of pieces.

“We’ve had to be really choosy,” said Ms. Ingrassia, who’s moved many works to their farm in Connecticut. But the radically different architectural space of their condo has offered an invigorating opportunity to re-envision the mix in Brooklyn, which now includes paintings by Lynette Yiadom-Boakye and Nicole Eisenman, videos by William Kentridge and Marilyn Minter, a figurative sculpture by Sanford Biggers and a Takashi Murakami silver tondo (a circular work) incised with a skull motif — hung on the ceiling and reflecting the river outside. 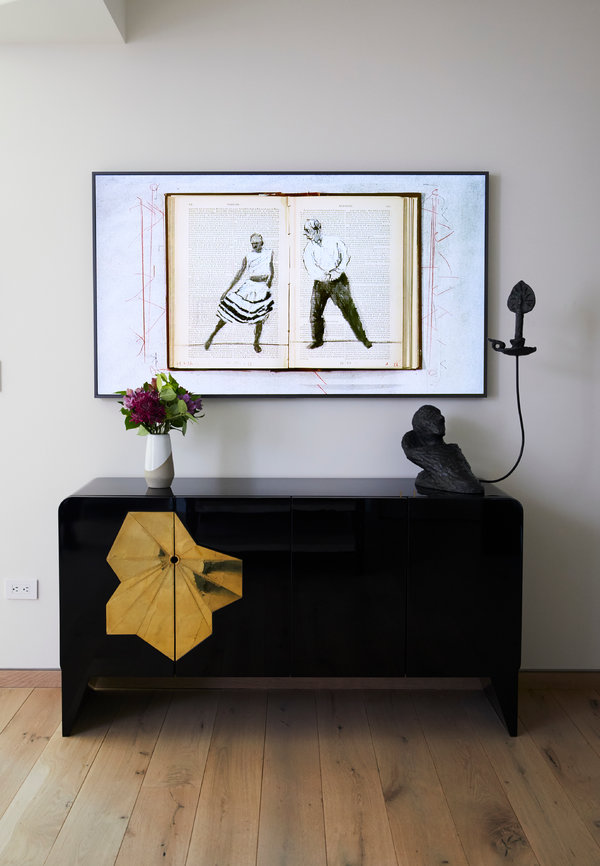 “We’re living with things now that have only been in storage,” Ms. Ingrassia said. Charles Gaines’s huge photograph of bare trees encased in a Plexiglas box painted with a vibrantly colored grid hangs floor to ceiling in the entrance gallery (the chair moldings in the old house precluded installing it there). Josiah McElheny’s mirrored light box filled with vessels, set into the wall in the living room, required electricity and a cutout that was easier to engineer in the new space.

Ms. Ingrassia, who grew up in Michigan, studied graphic design at the School of Visual Arts and bought her first painting from a teacher there. After the couple moved to Brooklyn and had walls to fill, she began collecting seriously, drawn to strong graphic collages by artists including Donald Baechler, Ray Johnson and Barbara Kruger. As a 30-something stay-at-home mother 19 years ago, she was recruited to the board at the Brooklyn Museum by Arnold Lehman, then a new director who was trying to change the makeup of the older board.

“Arnold had some influence on opening my eyes to more cutting-edge aspects of contemporary,” said Ms. Ingrassia, who, through the museum, was introduced early on to the works of Wangechi Mutu, Mickalene Thomas and Nick Cave, all of whom are now in the couple’s collection.

“The museum thinks creatively about social justice and showing the world through a different lens,” she said. “It’s why I got involved there.”

Here are edited excerpts from the interview.

What tends to be your collecting approach?

I go through dealers. Auctions feel too commercial and pressured. I like the hunt. I like learning early and following an artist’s career.

Do you go to art fairs?

I do; there’s just an efficiency to it. I don’t always buy, but I always take notes. I was just in London at Frieze, which was overwhelming. The fair I loved and actually purchased art at was 1-54 [Contemporary African Art Fair]. I like being able to see dealers that I wouldn’t ordinarily see.

Do you know any of the artists you collect?

I love to meet them. When you hear them talk about their work and understand their process, it just becomes that much more meaningful. Amy Sillman was one of the first artists whose studios I visited. She’s become an obsession.

Do you collect with the museum in mind?

Yes, we have tried to really energize the contemporary collecting at the museum. Tim and I bought a great Kiki Smith sculpture for the museum and a Donald Moffett sculpture. He was recently honored with his partner, Robert Gober, at the Brooklyn Museum. The museum doesn’t have a lot of funds, and I don’t want miss out on these artists who are important to our community. Basquiat took classes at the Brooklyn Museum and we don’t have a Basquiat.

Do you have a Basquiat?

Might things go to the museum down the road?

I would love to build a collection that one day goes to the Brooklyn Museum. I always tell my kids, if they don’t pay attention to the art that they’re living with, it won’t be there for you!