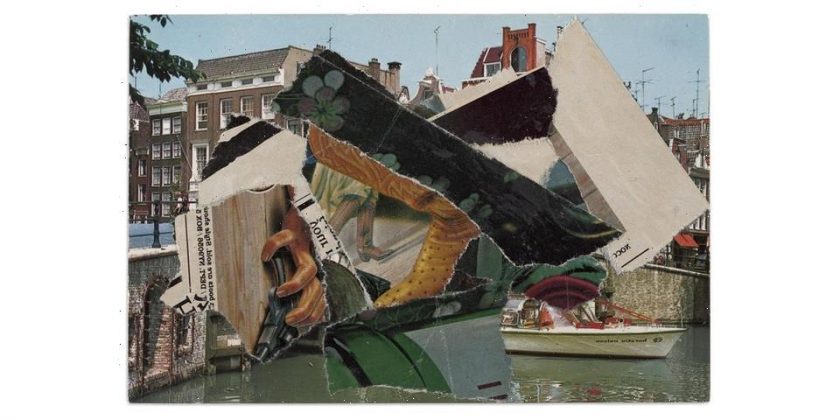 Throughout the course of his prolific career, Ellsworth Kelly would draw on his memories to create abstract compositions that meditated on color, form, and the surrounding environment. Although he was a celebrated draftsman and artist, Kelly created intricate postcard collages that would serve as pre-sketches to many of his large-scale works.

Published by DelMonico Books, Ellsworth Kelly: Postcards presents nearly 400 of these musings that he created from 1949 until 2005. This lesser-known practice exhibited Kelly in his unbound creativity — showcasing the imaginative ways in which saw and re-envisioned the world. Much of this work was kept from the public and was sent to family and friends over a 50-year span.

The book is in conjunction with the recent reopening of the Frances Young Tang Teaching Museum and Art Gallery at Skidmore College in Saratoga, New York. “Before Photoshop and CAD (computer-aided design) software, this was Kelly’s way of testing an idea, placing an object in a landscape and seeing it to scale,” said Ian Berry, the museum’s director. “It allowed him to place a triangle of color into a landscape and suddenly, it looks 100 feet tall,” Berry added.

In a 1973 interview with the Smithsonian, Kelly reflected on the collages noting: “If you could try to think of yourself as just born from another planet and try to understand things from a purely visual point of view—then everything is fantastic. Everything has infinite possibilities. Anything goes, and what you see can be used.”

Ellsworth Kelly: Postcards is available to pre-order for $60 USD via a number of retailers, such as Artbook London, Barnes & Noble and Amazon. The publication will release on February 15, 2022.