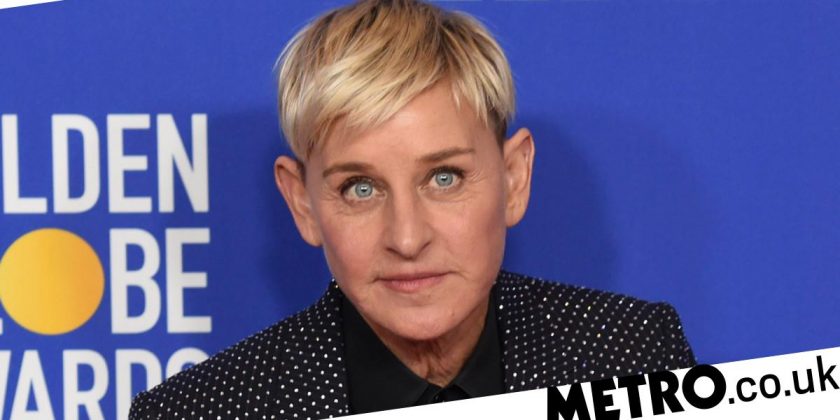 Ellen DeGeneres doesn’t know where the ‘crazy’ no eye contact rumours are coming from, it’s been claimed.

The chat show host had a Zoom call with more than 200 of her staffers on Monday, after three of her show’s producers were fired amid ‘toxic’ workplace claims.

The 62-year-old allegedly addressed claims that none of her staff members are allowed to look at her on set.

‘I don’t know where it started,’ Ellen said in the Zoom meeting, Page Six claimed.

Former producer Neil Breen claimed in July that Ellen’s producers told him not to look at the TV star during a 2013 interview.

‘[Ellen’s] producers called us aside and said, “Now, Neil, no one is to talk to Ellen. You don’t talk to her, you don’t approach her, you don’t look at her,”‘ Neil said on radio station 4BC.

He added: ‘She’ll come in, she’ll sit down, she’ll talk to Richard and then Ellen will leave. And I sort of said, “I can’t look at her?” I found the whole thing bizarre.’

Elsewhere in her Zoom call, Ellen reportedly said she has ‘good days and bad days’ and is an ‘introverted’ character.

She said this sometimes makes her want to be alone and have her own space on set, which could come across as her being unfriendly, according to Deadline.

‘Does that mean I’m perfect? No. I’m not,’ Ellen allegedly said.

‘I’m a multi-layered person, and I try to be the best person I can be and try to learn from my mistakes.’

The Ellen Show has faced numerous allegations in recent weeks, following claims of racism and intimidation backstage by former staff members in a Buzzfeed expose.

Ellen has since penned an apology, where she said she takes ‘full responsibility’ for the working environment and is working with WarnerMedia to get rid of the ‘toxic’ culture.

The host has been defended by a slew of celebrities like Katy Perry, Octavia Spencer, Ashton Kutcher and Kevin Hart following the accusations.

Metro.co.uk has contacted a rep for Ellen for comment.