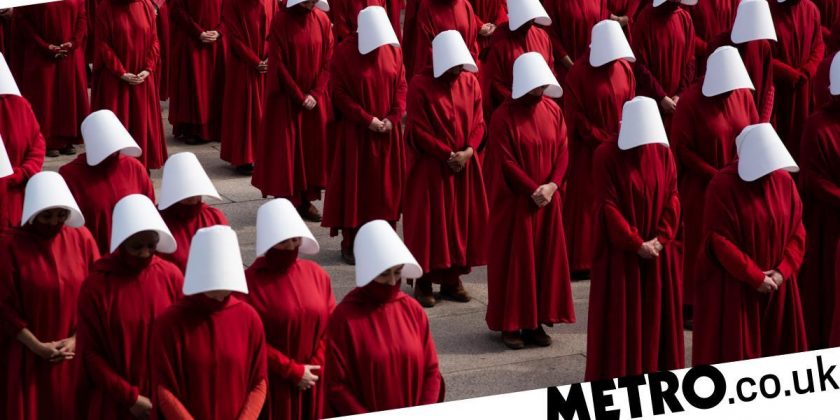 Good news for fans reeling from the desecration of the Game of Thrones universe: the chance to relish in fictionalised worlds that are actually meant to disappoint you has arrived, as two leaders of the dystopian genre, The Handmaid’s Tale and Black Mirror, return.

Both latest installments land on Hulu and Netflix on 5 June and though welcome, their reprisals feel particularly bleak this time.

Things have changed since both shows were introduced (The Handmaid’s Tale in 2017 and Black Mirror in 2011). Neither arrived at the height of western stability, and they were never exactly intended to comfort, but much of the entertainment lay in how close they were to a reality that hadn’t yet arrived, and didn’t yet feel inevitable.

In many ways the similarities made them scarier than horror films but the overarching, semi-soothing message was that things could always be worse – and we still had time to make sure they weren’t.

Whether harking back to a dilapidated past or anticipating a fictional, fallen future, they were part programme, part warning shot. But every day we edge closer to a reality where the dystopian verges on documentary.

The Handmaid’s Tale was trending this week, not because of its return but on the back of news that Alabama has passed a bill to outlaw abortion in almost all cases, including rape and incest. The states 35-seat Senate is dominated by men, 25 of whom voted to pass it. Amendments introduced by the only four female senators were all dismissed.

The once distant fear of robot overlords draws ever closer; every day a more alarming update is unveiled. The latest is the news that Amazon retains transcriptions of voice recordings with Alexa, regardless of whether you delete the recording.

The rise of dystopian television is unsurprisingly concurrent with the election of Trump, the climate change crisis, the uncertainty of a post-Brexit Britain and the growth of the far-right.

Add to this the exploitative reality television suicides that have been dominating recent headlines. From Jeremy Kyle to Love Island, there are echoes of Black Mirror episode Fifteen Million Merits.

Days ago, a 16 year old in Malaysia took her own life after creating an Instagram poll to decide between life or death. Sixty-nine per cent of respondents picked ‘death’ – it could easily have been a side plot in episodes Black Mirror episodes Shut Up and Dance or Nose Dive.

For every twee rom-com Netflix churns out, it has twice as many dystopian dramas: Osmosis, Altered Carbon, What Happened To Monday, Colony, Bird Box, 3%.

Other streaming services are taking note: Apple TV is launching See, a drama centred around ‘a future when the human race has lost the sense of sight’. Then there is Extinct, where humans return to Earth ‘400 years after extinction’ and Shatter Me, ‘set in a dystopian future’.

The BBC’s new six-part drama Years and Years follows the lives of three generations of a Manchester family from 2019 through to 2034, against a backdrop of a ‘mad society’ with Trump-Farage hybrid populist leader Vivienne Rook at the helm.

The rise of dystopian television is unsurprisingly concurrent with the election of Trump, the climate change crisis, the uncertainty of a post-Brexit Britain and the growth of the far-right, amongst other things.

Charlie Brooker’s blue CGI bear-come-politician Waldo in Black Mirror was inspired by Boris Johnson. When Years and Years writer Russell T Davies was asked which politician he’d mined for Rook’s character, he aptly summarised the current political landscape by replying: ‘All of them’.

From 1984’s Thought Police to the prescient commentary on migration in Children of Men, we have long been obsessed with near future ‘what ifs’, and made uncomfortably accurate predictions.

But as we veer into increasingly regressive, turbulent and surreal times, they feel more like a flash-forward than an entertaining form of escape.