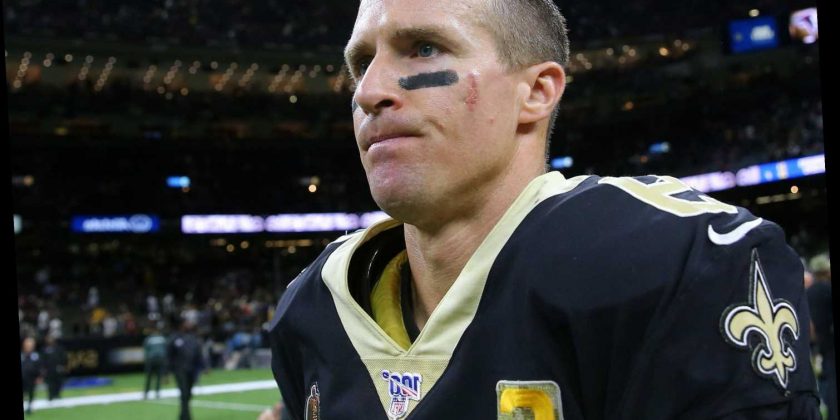 Drew Brees admitted he’d “completely missed the mark” this week when he dismissed NFL players taking a knee in protest of racial inequality and police brutality as “disrespecting the flag.”

On Thursday, the New Orleans Saints quarterback posted a lengthy apology to his social media accounts, one day after coming under heavy criticism from fans and fellow athletes.

“In speaking with some of you, it breaks my heart to know the pain I have caused,” the 41-year-old wrote. “In an attempt to talk about respect, unity, and solidarity centered around the American flag and the national anthem, I made comments that were insensitive and completely missed the mark on the issues we are facing right now as a country.”

“I will never know what it’s like to be a black man or raise black children in America but I will work every day to put myself in those shoes and fight for what is right,” Brees continued. “I recognize that I should do less talking and more listening… and when the black community is talking about their pain, we all need to listen. … I am very sorry and I ask your forgiveness.”

On Wednesday, Brees had made some controversial comments in an interview with Yahoo! Finance. Asked whether he thought NFL players would resume kneeling during the national anthem in future seasons, he said, “I will never agree with anybody disrespecting the flag of the United States of America or our country.”

“I envision my two grandfathers, who fought for this country during World War II, one in the Army and one in the Marine Corp,” he continued. “Both risking their lives to protect our country and to try to make our country and this world a better place. … I think what you do by standing there and showing respect to the flag with your hand over your heart, is it shows unity.”

The backlash to Brees’ remarks was, not surprisingly, swift.

“He’s beyond lost,” San Francisco 49ers cornerback Richard Sherman tweeted. “Guarantee you there were black men fighting alongside your grandfather but this doesn’t seem to be about that.”

Los Angeles Lakers star LeBron James said, “You literally still don’t understand why Kap was kneeling on one knee?? Has absolute nothing to do with the disrespect of [the flag] and our soldiers (men and women) who keep our land free.”

Brees’ initial comments came just a few days after Los Angeles Chargers coach Anthony Lynn spoke out in defense of NFL free agent Colin Kaepernick, who began sitting and then kneeling during the anthem in 2016 when he was a quarterback for the 49ers.

“People talked about disrespecting the flag,” Lynn told the Los Angeles Times. “The flag covers a lot — patriotism and civil rights and other things.”

Brees’ teammate Demario Davis told CNN on Thursday that he accepted the quarterback’s apology, but urged Americans to “stay focused on the issue at hand.”

“For him to come out and say, ‘I missed the mark, I’ve been insensitive, but what I’m gonna start doing is listening and learning from the Black community and finding ways that I can help them,’ I think that’s a model for all of America,” Davis added.