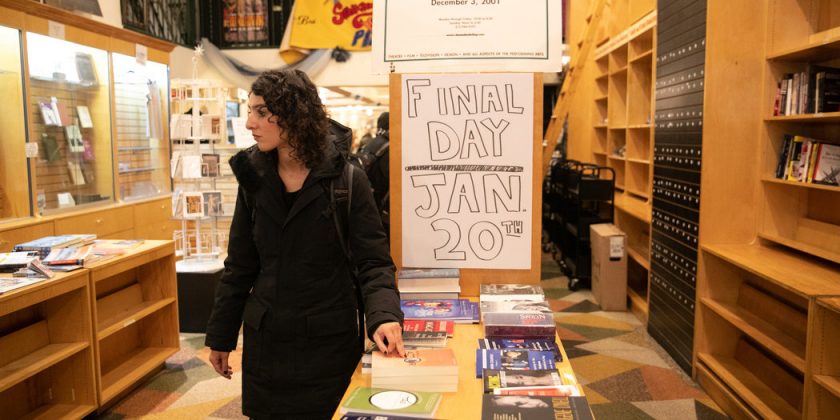 The final event at the Drama Book Shop, the New York haven for theater insiders and fans, was, in the end, quite modest.

It wasn’t a big party or a series of speeches to remember the beloved store, which on Sunday will permanently close its doors on West 40th Street. Rather, it was a reading: In the small basement theater on Friday evening, two playwrights, Annie Baker and Amy Herzog, read from and discussed their latest published works.

There was a scene from Ms. Herzog’s “Mary Jane,” a mysteriously profound tale of motherhood and child illness, and two monologues from Ms. Baker’s “The Antipodes,” a surreal piece about storytelling in which characters claim there are seven types of stories in the world — or 36, or 19, or 10, depending on whom you ask. 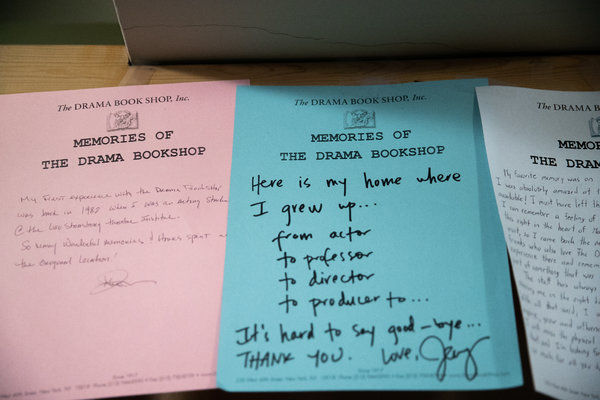 One of those types, perhaps, is the quintessential, all too frequent New York story of a beloved small business that, in the face of a drastic rent increase, is forced to close. The century-old Drama Book Shop announced last fall that it wouldn’t renew its lease at 40th Street, where it has been since 2001, because the monthly rent — already pushing $20,000 — would go up by 50 percent.

But this version of the story has a happy, deus ex machina ending: Earlier in January, Lin-Manuel Miranda and a few of his “Hamilton” colleagues bought the store, with plans to reopen at a new location later this year. It was a grand thank-you to the place where, in the same basement as Friday’s event, Mr. Miranda had sat at a piano writing the music for “In the Heights.”

Like Mr. Miranda, many artists from the theater world have used the Drama Book Shop as a much more than a store: a place to write, research or just talk with peers and potential colleagues. Monty Renfrow, a 25-year-old actor in line for Friday’s event, said that he felt “at home” there, and had been coming for years.

Andrew Tarzis, 26, who had thought he would have a career in film, said, “I wasn’t a theater person before I found this place.”

Fully aware of the memories people have of the store, the Drama Book Shop has invited visitors to share them on sheets of paper that have been taped to the bookshelves. Many simply wrote thank you for helping them get their first jobs, or into college. One person’s favorite memory was “getting to marry the cashier.”

The papers are helping to hide the increasing emptiness of the Drama Book Shop. Its window displays are still up — currently, for “The Prom” and “Kiss Me Kate” on Broadway — and its famous dog, a decade-old German spitz named Chester, still sits sleepily on a counter by the door. But on Friday there seemed to be more people in the store than books on the shelves. (They remain on sale through Sunday.)

In the basement theater, a black-box space decorated with white Christmas lights, every seat was filled, with the audience spilling out into the hallway outside. Many of the younger people in the crowd took notes as Ms. Baker and Ms. Herzog, with aw-shucks humility and deadpan humor, shared anecdotes about their artistic processes and experiences together.

The two playwrights said they had been involved in each other’s work for about 12 years; they also have a reading group together, in which they and other artists test drive their latest projects. On Friday, they reprised their roles from the group: Ms. Baker as Mary Jane, Ms. Herzog as Sarah, the assistant from “The Antipodes.”

After a brief conversation and audience questions, everyone moved upstairs to get their Baker and Herzog plays signed — but not before the store’s manager stepped out to say, solemnly, “Thank you very much for attending the last event at the Drama Book Shop!”