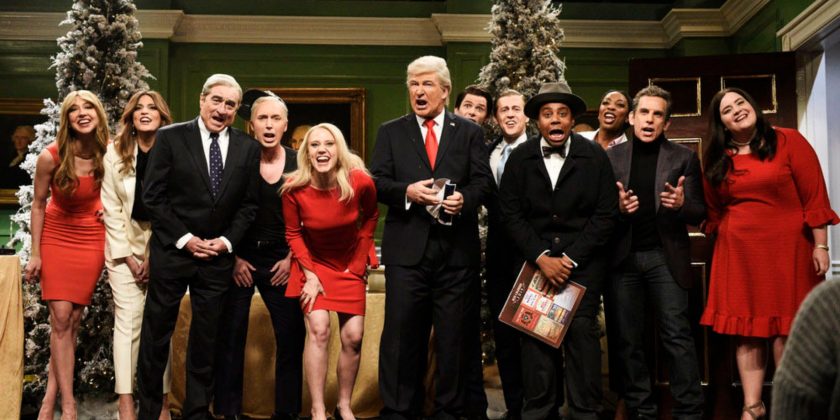 Several SNL regulars rounded out the skit. Kenan Thompson played an angel named Clarence who guided Baldwin’s Donald Trump through an alternate reality of what life would look like had he never been elected.

“Wow, everyone looks so different. What are those things on their faces?” Baldwin’s Trump muses as he enters a world in which he isn’t the POTUS. To which Thompson’s Clarence responds, “Those are called smiles.”

Bryant’s Sanders thanks Trump for steering her toward the PR world, saying, “I make so much money working for so many awesome companies like Facebook and Ashley Madison and the romaine lettuce association.”

After Baldwin’s Trump compliments McKinnon’s Conway for looking “healthy and vibrant,” she quips, “That’s because I’m no longer eaten from within by lies.”

In this reality, Moffat’s Eric Trump is smart and multi-lingual, while Strong’s Melanie has lost her accent altogether. “They said being around you was hurting my language skills,” she explains.

As for Stiller’s Cohen, Baldwin’s Trump isn’t happy to see him, but Cohen claims they are BFFs and that “every single thing I’ve done is because you’ve directed me to do it.”

Not one to be left out of the narrative, Damon’s Kavanaugh excitedly gifts Trump a calendar where “every day was a different beer.” In this new world, people find it “charming” when he tells them he likes beer — not threatening.

And, finally, De Niro’s Mueller makes an appearance… just as Baldwin’s Trump supposes the world must be better if Mueller isn’t in it. “I have something for you. It’s a picture of my grandson. I’ve been spending so much more time with him since I don’t have to investigate some idiot for treason,” De Niro’s Mueller reveals.

Ultimately, Baldwin’s Trump basically misses the whole point and returns to the real world. And, well, back in the real real world, the real Trump was — how shall we say it? — less than enthused with the “It’s a Wonderful Life” spoof.

On Sunday, the president took to Twitter to accuse SNL of being one of the Democratic party’s “spin machines” and to suggest the show couldn’t be legal and should be “tested in courts.”

Throughout SNL’s 44th season so far, Trump has expressed his displeasure at being parodied by Baldwin and over his administration being mocked.