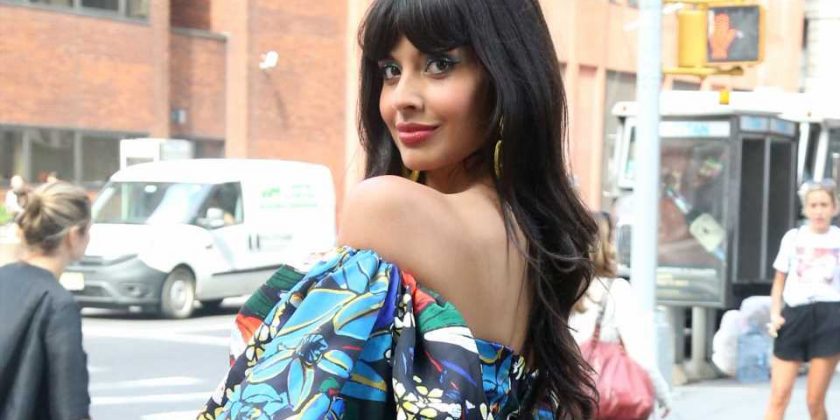 Jameela Jamil is publicly clapping back at a conspiracy theory claiming she suffers from Munchausen syndrome. Yep, it’s apparently that kind of week on the internet. The Good Place star not only denied the accusation, but she also came up with an interesting way to handle having reached “crazy rumor level fame” — by starting a wild accusations thread about herself and asking fans to kick in their best fabricated Jamil stories as well.

So, in case you missed this week’s drama, writer/podcast producer Tracie Egan Morrissey fell down a rabbit hole centered on Jamil’s health battles over the years. In a lengthy Instagram Stories thread, she shared her theory that Jamil (and maybe also her estranged mom and brother?) are actually suffering from Munchausen syndrome. Since the internet is a hotbed of conspiracy theorists, Morrissey’s claims went viral enough to elicit a reaction from Jamil.

Taking to Instagram, she refuted the entire “viral conspiracy thread,” pointing out fundamental inaccuracies in timing. And after feeling “gaslit and targeted for harassment” for a few hours, Jamil decided to do something about it. “Some people have sad, empty lives. And doing this gives them purpose. And I don’t have to do stuff like this because I have a purpose in @i_weigh and all our beautiful policy change and fights for legislation to protect young people,” she wrote. “So now I think all of the accusations are hilarious and I’m starting my own rumors.”

Some weirdo stalker started a viral conspiracy thread on my having munchausens apparently. She thought that because my car accident stories was “different” …. that’s because they were about two separate car accidents 13 years apart. In her rush to bully and drag, she forgot to read… 🤓 But after a few hours of feeling upset that I’m being gaslit and targeted for harassment… I sort of realized… oh. Ok. Some people have sad, empty lives. And doing this gives them some purpose. And I don’t have to do stuff like this because I have a purpose in @i_weigh and all our beautiful policy change and fights for legislation to protect young people. So now I think all of the accusations are hilarious and I’m starting my own rumors. Write your best rumor about me below!

In case you’re wondering, Munchausen syndrome isn’t the same as Munchausen by proxy… aka what we all watched unfold on the small screen in Hulu’s The Act. By definition, Munchausen syndrome is “a psychological disorder characterized by the feigning of the symptoms of a disease or injury in order to undergo diagnostic tests, hospitalization, or medical or surgical treatment.” Munchausen by proxy is a condition in which a person either fabricates or causes a person in their care to be seriously ill or injured.

Since Jamil slams the notion that she has either, she called on fans and followers to share their wildest fake news about her — and they definitely delivered. “I heard that your hair is insured for $10,000… and that you do car commercials in Japan. One time you punched me in the face… it was awesome,” one commenter joked, referencing Mean Girls.

Others continued to flood Jamil’s feeds.

Jamil even kicked in a few of her own.

However, Jamil also made a salient and serious point about invisible disabilities and the harmful rhetoric that something doesn’t exist if the rest of us can’t see it.

“Being gaslit over your health for entertainment is a very specific pain and trauma that a lot of people with Ehlers Danlos/invisible disability have to face every day from people who don’t understand our vastly under-researched condition. And to what end? Who wins?” she tweeted. “If I was an oil tycoon destroying the planet, or a serial sex offender, I would maybe understand this vitriol and effort to target and harass me. But I’m just a mental health/eating disorder  advocate actually taking the time to change public policy and legislation to protect kids.”

Jamil has spoken openly in the past about Ehlers-Danos syndrome. According to the U.S. National Library of Medicine, this is “a group of disorders that affect connective tissues supporting the skin, bones, blood vessels, and many other organs and tissues.”

Hopefully, Jamil won’t have to give any more time and energy to this particular line of inquiry. But then again, as she herself acknowledges, she’s probably reached the point in her career where the crazy rumors are going to fly. But at least the next time that happens she has a solid strategy in place for turning a frustrating situation into a funny one!