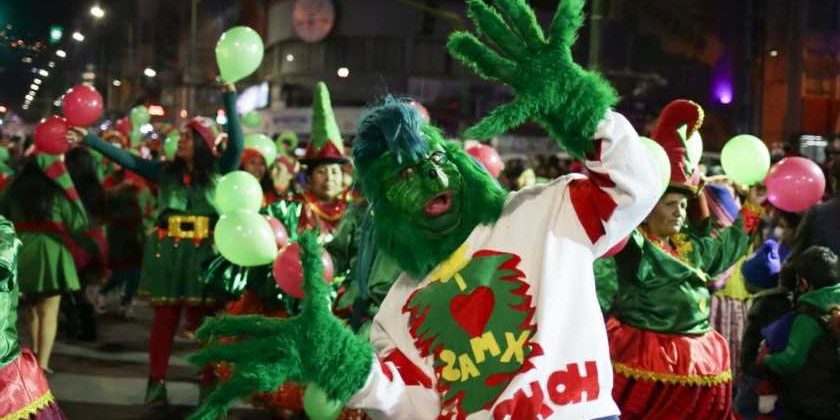 Have yourself a scary little Christmas and stream one of these festive horror films, stat.

Gathering around the fire to share ghost stories was a beloved Christmas tradition in the late 1800s into the early 1900s. Indeed, Charles Dickens’ A Christmas Carol – which is all about a miserly man being haunted by three spirits – remains one of the holiday season’s most beloved stories.

And now, just in time for Christmas 2022, we have The Mean One. Which, as you might have guessed, is a horror movie that follows a slasher version of the Grinch in its twisted retelling of How The Grinch Stole Christmas.

Watch the trailer for The Mean One below:

It looks bonkers, right? And yet, somehow, also quite… fun?

Set over 20 years after her family was murdered by a furry green monster, Cindy You-Know-Who (Krystle Martin) returns to the wintery town of Newville, where the Mean One comes out of hiding for another season of holiday slayings.

Cue Cindy finding a bold new purpose: she wants to trap and kill the monster, once and for all.

The Mean One will land in cinemas on 9 December. And, if that gets you in the mood for more festive scares, we’ve looked out some of the best Christmas horror movies for you and your loved ones to stream in the run-up to the big day.

Of course, we feel compelled to warn you that some of these films may leave you quaking when, the night before Christmas, silence descends upon your home and all creatures (even mice) cease to stir. And that we will, naturally, be updating this list with new scary (and streamable) titles as they become available.

That caveat in place, then, let’s get our ho-ho-horror on.

This horror anthology includes a short scary film about each of the major holidays, from Easter to St Patrick’s Day. The Christmas chapter, though, is a Black Mirror-esque nightmare guaranteed to mess with your head long after the credits roll.

Holidays is available to stream on Netflix.

In the depths of the Korvatunturi mountains, a secret mountain drilling project uncovers the tomb of Santa Claus himself. However, Pietari (Onni Tommila) and Juuso (Ilmari Järvenpää) soon realise that this isn’t the jolly old St Nick they’ve been told about: far from it, in fact. Because this monstrous, evil Santa comes hand-in-hand with slaughtered reindeer and a spate of missing children. Gulp.

Beloved by critics, Rare Exports boasts a 90% ‘fresh’ rating on Rotten Tomatoes. It is also, though, guaranteed to leave you screaming if you wake up to the sound of sleigh bells ever again, so it’s your call whether you want to open Pandora’s box or not.

Rare Exports: A Christmas Tale is available to rent on Amazon Prime Video.

Ashley (Olivia DeLonge) takes a babysitting job over the holidays, which means she’s a) spending Christmas alone in a strange suburban home of the Lerners, and b) the only adult around to protect 12-year-old son Luke (Levi Miller) when unwelcome intruders break in.

Consider this critically-acclaimed horror a twisted Home Alone for adults, and prepare yourself for plenty of shocks along the way to the big finale.

Better Watch Out is available to rent on Amazon Prime Video.

Guess which rule Billy (Zach Galligan) breaks? Cue the mayhem (and the horror)…

Gremlins is available to rent on Amazon Prime Video.

Best Christmas movies on Amazon Prime: 29 festive films to watch, from Your Christmas Or Mine to Last Christmas

Anna & The Apocalypse is that rare Christmas horror musical you’ve been searching for since, like, the dawn of Hollywood. The film kicks off as a zombie apocalypse threatens the sleepy town of Little Haven, forcing Anna (Ella Hunt) and her friends to fight, slash and sing their way to survival, facing the undead in a desperate race to reach their loved ones. But they soon discover that no one is safe in this new world. And we mean no one.

Anna & The Apocalypse is available to buy on Amazon Prime Video.

If you grew up with Goosebumps and Point Horror books littering your room (as this writer did), then Krampus is the festive horror for you.

Boasting an all-star cast, it sees a stressed-out family unwittingly unleash the wrath of Santa’s “shadow,” a demon who comes “to punish” them for their lack of holiday spirit. Will they ever escape his wrath?

Krampus is available to stream on Netflix.

Oh sure, this one didn’t exactly win over critics (it has a lacklustre 38% ‘rotten’ rating on Rotten Tomatoes), but that doesn’t mean Black Christmas isn’t a fun film. Set during the holiday season, it sees Riley (Imogen Poots) and her friends prepare for a Christmas party, only for a masked murderer to find out about it and embark on a killing spree.

Unlike most horror victims, though, these girls decide to fight back. And, as such, it’s a slasher thriller with a difference.

Black Christmas is available to buy on Amazon Prime Video.

A scene from Christmas Crossfire.

Little is known about this dark holiday comedy from Germany. All we can tell you (without spoiling too much) is that it tells the story of a man who — after foiling a murder attempt — finds himself on the run with the killers’ intended target. And, yeah, that it’s been filed under the ‘horror comedy’ category on Netflix, obviously.

Christmas Crossfire will be available to stream on Netflix from 4 December.

Tim Burton’s The Nightmare Before Christmas

This isn’t exactly a horror movie per se, but there’s no denying that Tim Burton’s iconic animated film is creepy as… well, as creepy as the undead characters at its heart.

We all know the story: Jack Skellington, the disillusioned undead hero of Halloween Town, accidentally stumbles into the frosty world of Christmas and is instantly enchanted. When he decides to abduct Santa Claus, though, and steal the holiday for himself, things get… yet, they get manic.

Tim Burton’s The Nightmare Before Christmas is available to buy on Amazon Prime Video.

As you’ve probably guessed from the title, the horror in this festive film is hinged upon the children at its centre.

The story kicks off as two families gather to celebrate the holidays together, with Elaine (Eva Birthistle) and her sister, Chloe (Rachel Shelley), along with their husbands and children, anticipating a weekend of family bonding and winter fun.

Well, to say anymore would be to dish some serious spoilers. All you need to know is this: The Children is a disturbing ride from start to finish.

The Children is available to rent on Amazon Prime Video.

The main lesson of this film? Never take a shortcut down a creepy wooded road when you’re out driving late at night.

In Dead End, a family on their way to a Christmas Eve gathering do just that, prompting Frank (Ray Wise) to pick up a hitchhiker (Amber Smith) and her young child.

The mysterious woman, though, leaves a trail of death in her wake, as the family fall foul to a series of grisly accidents.

Will anyone survive the ride?

Dead End is available to rent on Amazon Prime Video.