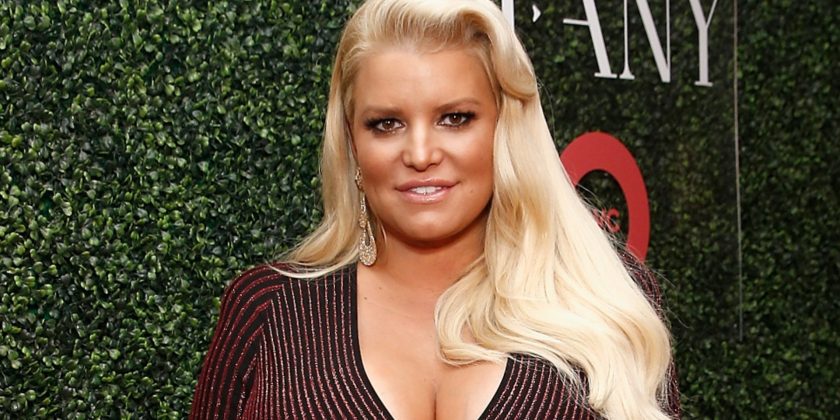 There may have been a big reveal made over the weekend. On Saturday, Jessica Simpson shared photos from her nature-themed baby shower on Instagram, including one where a custom-made neon sign may reveal the name of her new daughter. Fans took to the comments on Simpson’s posts to speculate about the possibility, also sending her and her family plenty of well wishes.

Simpson first announced that she and husband Eric Johnson are expecting their third child, a girl, back in September. They enlisted the help of their kids Maxwell and Ace to assist with the two-part announcement, which Simpson also posted on Instagram. Prior to her baby shower photos, Simpson begged her 4.4 million followers to help her find a remedy for her extremely swollen foot, which eventually led her to discover “cupping” to reduce the pain and swelling.

Fortunately, on Saturday, she was all smiles in her baby shower pics. The photos show Simpson dressed like a bohemian goddess, posing with daughter Maxwell (who’s also dressed for the theme) in front of a table full of gifts with bird-and-nest-themed wallpaper behind it. On the wall, a neon sign reads, “Birdie’s Nest,” which Simpson also wrote in her caption, along with two green heart emojis. She used the same caption in another photo of herself and Max posing with Simpson’s mom Tina Simpson, sister Ashlee Simpson Ross, and niece Jagger Ross.

As noted by Entertainment Tonight, fans were quick to comment on “Birdie” being a potential name for the new addition to Simpson’s family. Several commented to say it’s “beautiful,” with another writing, “cute baby name if that’s what it is!” And when some decided to add negativity to the post in their comments, others came to Simpson’s defense.

“Birdie is a beautiful and sweet name,” wrote one commenter. “Be respectful of THEIR decision. I recently came across a lady with the name Birdie. Congratulations to the family.”

In an additional photo, Simpson shared a close-up shot of her flower crown, captioned, “Birdie Beauty.” Although she hasn’t commented on the name speculation, she has been open about her pregnancy progress and how her family of four feels about becoming a family of five. In October, she told ET, “[Maxwell and Ace are] so excited because they’re only fourteen months apart, so they didn’t get to experience the excitement of each other. But when I told them that we’re having another baby, I know that they’ll remember that for the rest of their lives.”

No matter what Simpson and Johnson name their new daughter, we’re glad she at least got to enjoy her baby shower in spite of the tough parts of her pregnancy.