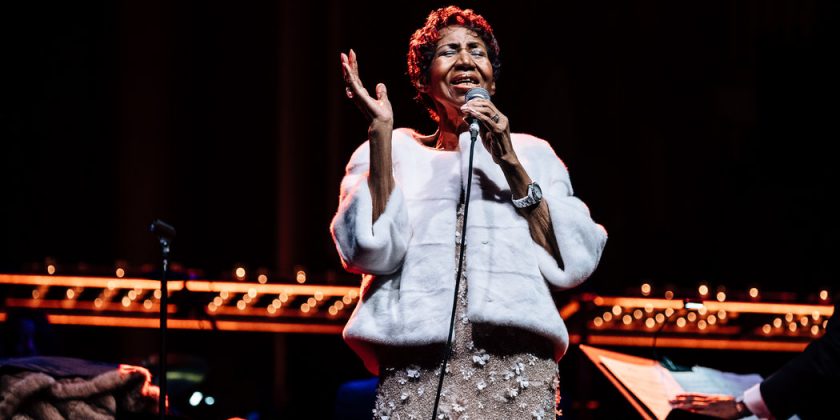 When Aretha Franklin died last year, her family said that she had left no will. But, as it turns out, she may have left a few of them.

In a court filing on Monday, the personal representative of Ms. Franklin’s estate disclosed that three handwritten documents had been discovered just weeks ago at Ms. Franklin’s home — one in a spiral notebook under her sofa cushions, the others in a locked cabinet — and asked a Michigan probate judge to decide whether any of them are valid wills.

The scrawled papers, which are dated between 2010 and 2014, are at times barely legible, with cross-outs, marginal notes and some salty tangents. Yet the documents, which the Franklin estate said it considers to be three separate wills, also lay out her intentions about distributing her assets after her death, including music royalties, real estate, jewelry and even a piano and stereo equipment. 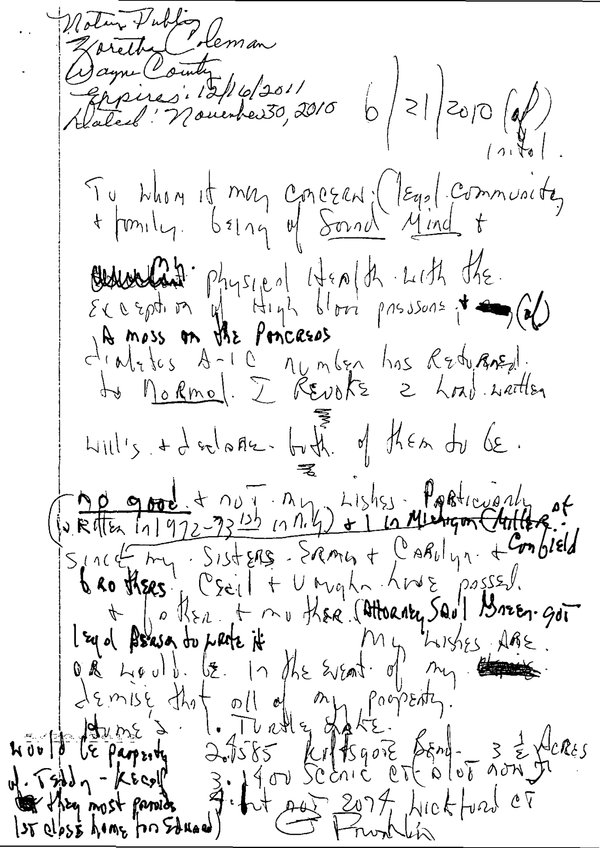 The unexpected surfacing of the documents has raised a whole new set of questions, not only about Ms. Franklin’s intentions, but about the validity of wills that are unwitnessed and roughly drafted.

“If those documents were all in Ms. Franklin’s handwriting,” said Melanie Jacobs, a professor of law at Michigan State University, “and if it is dated and it seems that there is intent for the document to be the will, it could be valid regardless of whether it has witnesses or is notarized.”

But Herbert E. Nass, a New York lawyer and the author of the book “Wills of the Rich and Famous,” said, “I think these handwritten documents are not going to get much respect from the court.”

The first document, dated June 2010, is the most extensive. Over 11 cramped pages, Ms. Franklin specified weekly and monthly allowances for her four sons, and appears to have signed every page. She also uses the document to zing various people she feels served her poorly, including a lawyer, an accountant and the father of one of her sons, who, she wrote, “never made any contribution to his welfare, future or past, monetarily, except $5 or $10.”

By contrast, the last document, dated March 2014, is only four pages, and more simply divvies up her assets among her children and grandchildren.

The discovery of the documents has apparently divided Ms. Franklin’s four sons. According to the court filing, Sabrina Owens, a niece of Ms. Franklin who was appointed the estate’s personal representative — a position referred to as an executor in some states — found the documents on May 3 and circulated them to the sons’ lawyers six days later, but they disagreed over their validity and provisions.

A statement from the estate said that two of Ms. Franklin’s sons oppose admitting the wills, but did not identify them.

The statement added that Ms. Owens “remains neutral and wishes that all parties involved make wise choices on behalf of their mother, her rich legacy, the family and the Aretha Franklin estate.”

If the wills are ruled invalid, then Ms. Franklin will have died without a will, and her four sons would receive equal shares of her estate, per Michigan law.

The estate’s filing said it was unclear whether the documents satisfied Michigan’s requirements to be considered wills. Several legal experts polled by The New York Times were also divided.

Kenneth J. Abdo, an entertainment lawyer in Minneapolis, said the documents appeared to show Ms. Franklin’s intentions, and might satisfy a Michigan law that stipulates the following conditions for a “holographic,” or handwritten will: that it need only be dated and signed, and that “the document’s material portions” must be “in the testator’s handwriting.”

Yet the documents’ ambiguities may cause problems, according to James R. Hines Jr., a professor at the University of Michigan Law School.

Given the way the documents were found, it was also unclear whether other potential wills might exist.

“We should be looking under all the furniture,” Mr. Abdo said.

When Ms. Franklin died in August at the age of 76, of pancreatic cancer, she was celebrated as an unparalleled master of American music — the “Queen of Soul” — and a civil rights hero, whose songs like “Respect” have remained anthems of empowerment for decades. Her funeral service in Detroit was an eight-hour send-off attended by Bill and Hillary Clinton, Jesse Jackson, Stevie Wonder, Smokey Robinson and Ariana Grande. 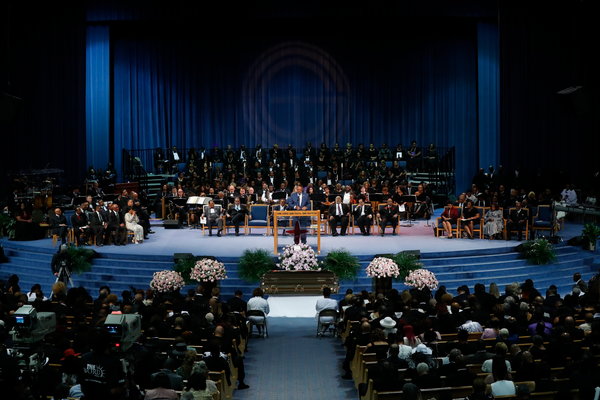 Taxes have loomed as a potential problem. The size of the estate has not been disclosed, but the Internal Revenue Service has filed a claim for nearly $8 million. David J. Bennett, a longtime lawyer for Ms. Franklin who now represents the estate, said in December that the estate had paid $3 million in back taxes since her death. Mr. Bennett declined to comment on Tuesday except to challenge whether a handwritten reference to him as “grossly inefficient” in one of the documents was really in Ms. Franklin’s handwriting.

“I acted as her personal attorney for many years and until the date of her death,” he said in a statement, “so if that is what she thought, I don’t know why she continued with me.”

The court filing gives a glimpse of the estate’s pending business, noting potential deals for a biopic and television show, as well as a review of the value of her music catalog and likeness.

In one of her first acts running the estate, Ms. Owens made a deal to allow the release of “Amazing Grace,” the long-delayed documentary of Ms. Franklin singing gospel at a Los Angeles church in 1972, which has been hailed by critics as a masterly performance. According to the website Box Office Mojo, “Amazing Grace” has grossed $3.7 million in ticket sales so far.

Another point of debate in the family is the plan by Ms. Owens, as executor, to sell a .12-acre sliver of land adjacent to a condominium that Ms. Franklin owned in suburban Detroit. One son, Kecalf Franklin, has filed papers to oppose the sale, citing, among other grounds, that one of the will-like documents indicates his mother had intended to give the property to him.

Donald J. Wilson Jr., a Los Angeles lawyer who handled Ms. Franklin’s entertainment deals for nearly 30 years, said the handwriting seemed to be hers. He had often advised her to create a will, Mr. Wilson said, as well as a trust that would shield financial details of her estate from the public, but that she had never told him about writing her own documents.

“If she had mentioned that to me,” Mr. Wilson said, “I would have said, ‘Aretha, what you really need to do is go see a lawyer and make sure it’s done in accordance with the law.’”

Ben Sisario covers the music industry. He joined The Times in 1998, and has contributed to Rolling Stone, Spin, New York Press and WFUV. He also wrote “Doolittle,” a book about the Pixies. @sisario