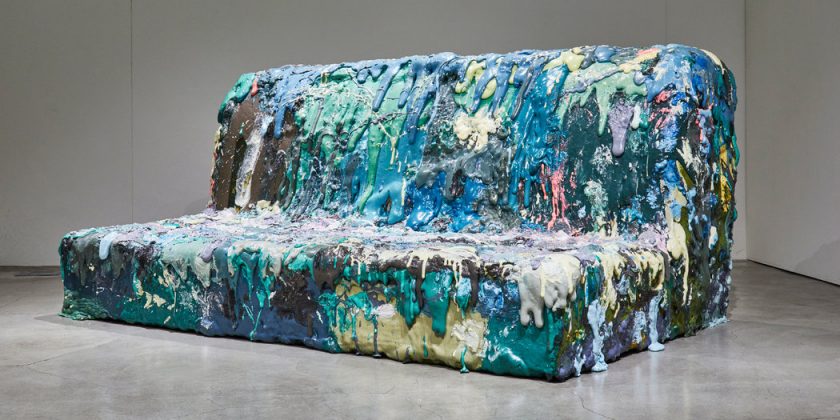 Imagine the horror. Some Art Basel Miami Beach visitors find the David Hockney or Roy Lichtenstein of their dreams and then realize they don’t have the right sofa or table to hang it over — or just the right home accessory to accent that room. Luckily, Design Miami, like the art fair, runs through Sunday, and it’s right across the street from the convention center.

“We’re sort of the quiet, understated market in a lot of ways,” Jennifer Roberts, the chief executive of Design Miami, said in a telephone interview from Florida. Art Basel is limited to fine arts; Design Miami limits itself to collectible art and architecture.

Sometimes that means home furnishings that are neither quiet nor understated. This year, visitors will find work from nearly 35 galleries, including a six-sided table designed by Charlotte Perriand in 1949, from François Laffanour’s Galerie Downtown in Paris; a collection of the Spanish-born designer Oscar Hagerman’s chairs, shown by Kurimanzutto, the Mexico City gallery; and a whole suite of stainless steel Michael Young furniture from Gallery ALL in Los Angeles. Not to mention these six intriguing pieces.

A sofa to remember

A moonscape? That’s how some people see Sang Hoon Kim’s 83-inch memory-foam-seat sofa, shown by the Cristina Grajales Gallery of New York. For others, it may seem more like a priceless Jackson Pollock painting that escaped its frame and shape-shifted, with every Abstract Expressionist drip intact. Mr. Kim, a South Korean designer whose family owned a foam manufacturing company for three generations, knows his material. “He treats it as if he’s painting on canvas or modeling with clay,” Ms. Roberts said. Organizers call it, among other things, “playful yet cerebral,” like much of his furniture design. 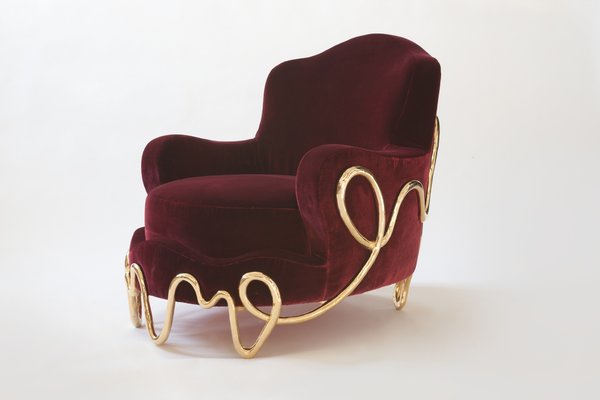 Mattia Bonetti, the Swiss-born, Paris-based designer and artist, knows what an important chair should look like. The upholstery in this piece from his Meander line is plush angora-mohair velvet accented with gold-plated bronzework in the shape of squiggles. The Kasmin Gallery in New York is presenting it. Carol Vogel of The New York Times once described Mr. Bonetti’s work as combining “a sense of whimsy and glamour with a distinctive intelligence and originality” in “freshly translated” historical forms.

Very tall in the saddle

Don’t plan to put Daniel Jackson’s Unicorn Rocker in the kids’ playroom, unless you’re raising Brobdingnagians or, at the very least, future N.B.A. stars. This fully functioning 1974 artwork, commissioned to be a fashion designer’s gift to his wife, is six feet tall and more than six feet long, hoof to hoof. The unicorn is unpainted (beautifully laminated instead) pine, oak and maple. Its whereabouts was unknown until recently, when a client of the Moderne Gallery in Philadelphia snapped it up at a private sale, then learned its history and passed it along to the experts there. Mr. Jackson, who died in 1995, saw a natural connection between furniture and sculpture. Born in the Midwest and taught by Danish masters, he was considered a major influence in the American Craft movement.

We gave at the office

Early in his career, Harry Nuriev, the Moscow-born architect and artist, worked as an intern in a Russian government bureau — and he just can’t get it out of his mind. This installation, part of Design Miami’s Curio program, brings it all back as a statement about conformity. “He’s critiquing office life and how you lose your identity,” Ms. Roberts said. But in fresh new ways. As organizers observe, the work “modernizes our expectations of the dour.” A coat rack and its single hanging garment remind us of office dress codes. The air-conditioner and the copier are solid oak. The rest of the room is gray, including the wallpaper, which shouts words like “technical,” “system,” “restart” and “crash” in white lettering. Mr. Nuriev’s admirers know he’s a major fan of monochrome, but elsewhere he tends toward vivid blues and warm pinks. “Bright colors make people smile and feel good,” he told Interior Design earlier this year. “It’s that simple.” Grays may not, but they make a powerful statement.

Many a 2-year-old with a box of crayons has treated wallpaper as an interactive medium, but this wallpaper — the Color and the Shape, designed by Philippe Malouin, who is Canadian and British, and manufactured by Rachel and Nick Cope’s Calico Wallpaper in Brooklyn — really is. Also part of the Curio program, it was inspired by Henri Matisse’s vibrant and influential cutouts from the late 1940s and early ’50s. The medium is the method: colorful, textured, oversize hand-cut forms that can be rearranged and layered, so you can devise a different collage for a special dinner party or houseguest, or just because seasons change and life is ephemeral. Mr. Malouin’s other furniture designs include revolving chairs, high-fashion stools and splashy chandeliers.

Ghost in the mirror

The most important thing about any mirror is your reflection, and in Jenny Nordberg’s new works, you may find yourself even more haunting than usual. Ms. Nordberg is a Swedish industrial designer who, as Ms. Roberts said, is “part of this new generation” that “incorporates performance into their design.” And you’re the performer. Ms. Nordberg’s own website sums up her style as “brutalism and minimalism cleverly combined.” According to her New York gallery, Hostler Burrows, she has also studied 19th-century mirror-making and uses some of those techniques here to create the spectral effects. The secret: A thin layer of liquid silver applied to the glass surface of each mirror Ms. Nordberg makes. It has an unpredictable mind of its own.