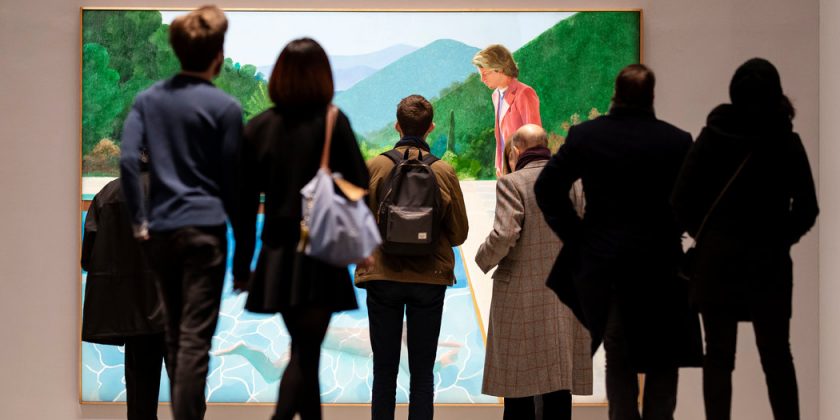 A celebrated and enigmatic painting of two men and a turquoise pool by David Hockney sold at Christie’s on Thursday night for $90.3 million with fees, shattering the auction record for a living artist and cementing a major broadening of tastes at the turbocharged top end of the market.

The price for the 1972 painting, “Portrait of an Artist (Pool with Two Figures),” easily surpassed the previous high of $58.4 million, held by Jeff Koons for one of his “Balloon Dog” sculptures.

The night before, a Sotheby’s auction produced new highs for three African-American artists and a 42-year-old female painter. Together the sales signaled a new inclusivity in the art world, driven by a generational shift toward artists who have been out of the mainstream, and driven by stratospheric prices for more established names. That has forced collectors to expand their search for emerging names who might be undervalued.

The new demand for living artists, and a dearth of quality material, have helped increase exposure for nonwhite and female artists, with several of their works notching multimillion-dollar sales.

The Hockney painting is a different kind of trophy, by an openly gay artist about the emotional life of gay men. While the subject is hardly verboten in art, it is still rare to see same-sex themes in an artwork at this price point. 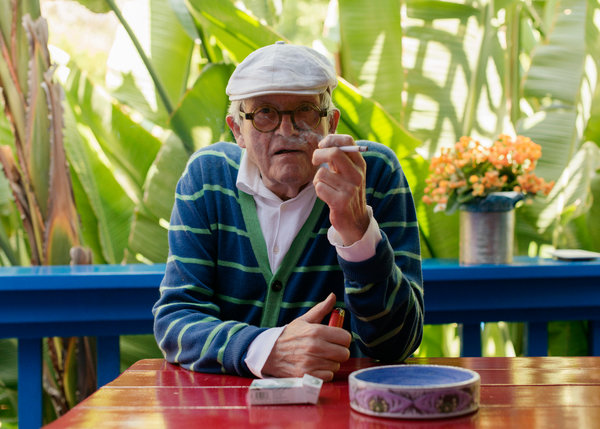 “Diversity is exactly what you’re seeing in the auction rooms — museums have done a huge job in positioning these artists,” said Brett Gorvy, a prominent dealer who was formerly head of contemporary art at Christie’s. “There’s definitely an investment mentality — the market is always looking for new areas.”

Mr. Hockney, a multitalented painter, draftsman and set designer who burst onto the British art scene in the early 1960s, has become one of the most popular living artists, though his work was not always taken seriously. His colors were too bright, his figures too realistic — the octogenarian Mr. Hockney even described his younger self as a “peripheral artist, really.”

But he is enjoying a commercial and reputational renaissance, thanks to three recent retrospectives, including one at the Metropolitan Museum of Art and another at Tate Britain that broke museum records. And at 81, though he has lost his hearing, he continues to paint and experiment with digital art.

Auction prices for work by Mr. Hockney, who declined to be interviewed, had achieved a new benchmark in May, when his joyously colored 1990 landscape, “Pacific Coast Highway and Santa Monica,” sold for $28.5 million. It was only 2016 when his works broke the $10 million barrier.

The much-reproduced “Portrait of an Artist (Pool with Two Figures)” was one of the Met show’s most admired paintings. Yet, despite its familiarity, this sun-drenched hilltop scene of a pink-jacketed young man standing by a pool, gazing down at a swimmer submerged in the wobbly blueness below, remains one the artist’s most mysterious works.

The painting was executed during a three-month period of intense creativity after the artist broke up with his American art student lover, Peter Schlesinger. Many viewers assume that the scene is set in California, where Mr. Hockney has lived for decades. But the canvas was painted in London, based on photographs taken at a pool in the South of France. The standing figure is derived from photographs the artist took of Mr. Schlesinger in London’s Kensington Gardens.

Ian Alteveer, who curated the Met’s Hockney show, said he singled out the painting in the show’s catalog because it signaled a shift in the artist’s portrayal of water — from a distinct splash to a watery soaking of the canvas — and it signaled the “culmination” of Hockney’s double portraits.

“It’s also a farewell to the relationship, which had come to an end,” Mr. Alteveer added, “and this grand statement about his interest in the psychology between two people that he’s been trying to capture.”

And where is the artist in the painting? Art critics have pointed out that there is little indication Mr. Schlesinger represents that title role. It has instead been suggested that the artist is Mr. Hockney himself, looking back at his lost lover, symbolically suggesting his own presence in the form of one of his iconic swimming pools.

The painting drew huge interest during the presale viewing in Christie’s Rockefeller Center showroom. “I’m only here for this,” said Post Villafane, 32, a young collector from Queens who viewed the painting on Wednesday. Mr. Villafane was not in the league of would-be bidders, but he was representative of a noticeably younger and more diverse crowd mingling with the usual middle-aged white art world insiders at this week’s presale showings. “The colors are so realistic,” he said. “They blend so well. Look how the paint shimmers. It’s beautiful.”

In reviewing the Met show, the New York Times art critic Roberta Smith described the artist’s “pictures of homosexual love and comradeship” from the early 1960s as “courageous,” given that they were made at a time when homosexuality was a criminal offense in Britain. “They should be a revelation to younger generations,” she added, “including painters using figurative styles to tell their own stories.”

The painting’s buyer and seller were not publicly revealed, but the seller was widely reported to be Joe Lewis, a market-savvy British billionaire based in the Bahamas. He audaciously offered his Hockney without reserve, meaning he set no minimum price, a sign of how confident he was that it would sell for its estimate of $80 million, or more.

Other signs of the sea change in the tastes of buyers came Wednesday evening at Sotheby’s contemporary art auction, when new highs were set for three African-American artists and a female artist.

Jacob Lawrence’s 1947 “The Businessmen” — featuring five African-American subjects in black suits with briefcases and paperwork — sold for $6.2 million, triple its high estimate of $2 million. Jack Whitten’s 1985 “Ancient Mentor I,” in which he pressed wet acrylic paint onto a mesh grate, sold for $2.2 million, nearly double the high estimate. And Henry Taylor’s 2004 canvas “I’ll Put a Spell on You” sold for $975,000, nearly five times the high estimate. (Mr. Taylor is the only one of the three still living.)

Nine bidders competed for “Her Arms,” a monumental 2003 painting by Dana Schutz, whose painting “Open Casket” depicting Emmett Till in his coffin caused a cultural furor at last year’s Whitney Biennial. “Her Arms,” which depicts a woman with a guitar, sold for $795,000, nearly four times the high estimate of $200,000.

The $21.1 million Sean Combs paid in May for Kerry James Marshall’s 1997 painting “Past Times” — an auction high for any work by a living African-American artist — heralded this shift in collecting sensibility. So, too, did the $12.4 million bid last month in London for Jenny Saville’s “Propped,” raising the bar for living female artists at auction.

Meanwhile, at the same Sotheby’s auction, prices were down for some names formerly beloved by ultrawealthy collectors. Jeff Koons’s knowingly kitsch 1988 polychromed sculpture, “Bear and Policeman,” sold for $6.5 million. This price was well below the $8 million given for another version of the same sculpture sold at auction in 2014, according to the Artnet price database.

While none of the newly appreciated living artists will directly benefit from the recent sales, they may be able to command higher prices for any later works they sell.

“My mama always said I was worth something,” Mr. Taylor, 60, said in a telephone interview. “There are a lot of artists who have gone unnoticed and are getting recognition, and that’s a good thing.”

In that way, Mr. Taylor said, the auction was gratifying. “All this posthumous love ain’t no good,” he said. “Give me my flowers when I’m here.”