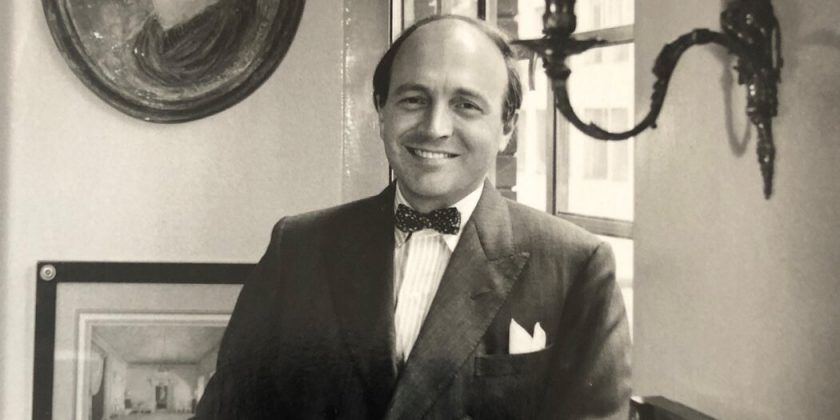 David Easton, an architect and interior designer who created English-style palaces for an American aristocracy, died on Oct. 29 at his home in Tulsa, Okla. He was 83.

James Steinmeyer, his husband and only immediate survivor, said the cause was complications of dementia.

In 1981, Mr. Easton was already an established architect and decorator when Alistair Stair, a principal of Stair & Company, an antiques dealer, suggested to Patricia Kluge, who had just married John Kluge, the much older billionaire head of MetroMedia, that Mr. Easton was the man to design the estate the couple wanted to build in Charlottesville, Va.

Mr. Easton and Ms. Kluge met at the Carlyle hotel in Manhattan, and, as was his habit, he used a cocktail napkin to sketch his design for a 45-room brick manor that the Kluges would name Albemarle House.

There were formal English gardens, five lakes carved into the estate’s 6,000 acres, a carriage house and stables, a grotto, a helicopter landing pad, an 850-acre game preserve and a chapel, for which Mr. Easton designed the vestments of the clergy who would preside there, as well as the crypt below. (Mr. Easton researched just what was required to store embalmed bodies.) The house itself was more than 23,000 square feet, and Mr. Easton filled it with European and English antiques.

Even for its time, at the height of the go-go Reagan years, Albemarle House was considered over the top.

“Albemarle House really threw down the gauntlet during the roaring ’80s,” said Stephen Drucker, former editor in chief of House Beautiful and Town & Country magazines. Gossip columnists fell all over themselves describing the excesses of the Kluges, like a private disco, a golf course and liveried footmen.

The Kluges certainly weren’t the only high-wattage clients in Mr. Easton’s portfolio. He designed an apartment in the Pierre hotel in Manhattan for Phyllis and Sumner Redstone, the media mogul who died in August. For Paula Zahn, the former CNN anchor, he built a contemporary house in Aspen, Colo. And for Herbert Black, the Canadian businessman who exposed the Sotheby’s and Christie’s price-fixing scandal in 2000, he created a Georgian-style house in Montreal.

Yet Mr. Easton, who had a deep knowledge of and abiding love for Regency furniture, Roman statuary, Delft pottery and Chinese antiquities, was not really an impresario of glitz and bling. His tastes were disciplined, and he did not seek the spotlight. 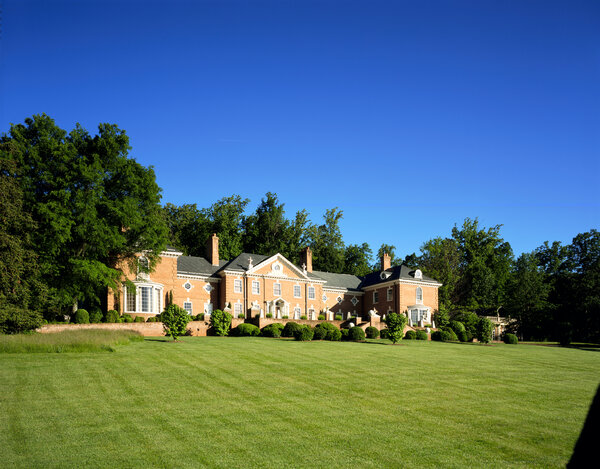 “He certainly did the grand houses of the 1980s, and nobody did it better,” said Bunny Williams, the interior designer who, like Mr. Easton, is an alumna of Parish-Hadley, the Kennedy- and post-Kennedy-era design firm that taught new money to look old and old money to look fresh. “But most of his work wasn’t published, because he worked for very private people. It was a totally different time, and he wasn’t interested in fame. He was confident about what he was doing, and he never had to be pretentious.”

David Anthony Easton was born on April 9, 1937, in Louisville, Ky., and grew up in York, Pa., the eldest of three children. His father, David Allen Easton, worked for the Federal Deposit Insurance Corporation as an accountant; his mother, Elizabeth (Scheidt) Easton, was a homemaker.

Mr. Easton spent summers with a grandmother in Chicago, and he knew he wanted to be an architect after visiting the Trend House at the Marshall Field’s department store there and becoming transfixed by its model rooms. He studied architecture at the Pratt Institute in Brooklyn, and after graduation received a scholarship to study architecture at a school in Fontainebleau, France.

When Mr. Easton returned to New York City in 1964, he went to work for Edward Wormley, the modernist furniture designer. But he was a classicist at heart. In 1967, Parish-Hadley hired him as a senior designer. He started his own firm in 1972, and by the next decade, his work, along with that of Mark Hampton and Mario Buatta, would become emblematic of the English-style opulence that defined the 1980s.

In the wake of that decade, Albemarle House floundered, along with the fortunes of its former inhabitants. In 1990, the Kluges divorced and Ms. Kluge kept the place, leveraging it heavily to finance a winery. When the mortgage crisis hit in the late 2000s, she first listed Albemarle House for $100 million, and then lost it to Bank of America, which sold it to Donald Trump for $6.5 million, after much litigation from the Trump Organization to secure a deep discount. It is now a hotel and vineyard called the Albemarle Estate and Trump Winery.

Speaking of his former client, Ms. Kluge, Mr. Easton told Town & Country in 2011: “I think she was searching for pleasure in life. The old Roman carpe diem. She was having a good time. I’m not protecting her. I’m just saying she has a view like that, and I think it’s a good and healthy one.”

Mr. Easton and Mr. Steinmeyer married in 2014, after 39 years together. Mr. Steinmeyer said he had been engaged to a woman back home in Oklahoma when he and Mr. Easton met in 1975. “David said: “I’m not going to tell you what to do, but you can’t have your life two different ways. Either way, you’re going to make somebody very unhappy. If you want to screw up your life, that’s fine. But don’t screw up somebody else’s.”

In 1992, Mr. Easton was named to Interior Design magazine’s Hall of Fame.

Despite his very proper interiors, Mr. Easton had a mischievous streak. He drank red wine with all his meals, even breakfast, declaring, like W.C. Fields, that he didn’t like water because fish mated in it (although both he and Fields used a different verb). Former employees recall Mr. Easton asking for a ham sandwich on the Concorde, the supersonic jet that used to ferry the wealthy across the Atlantic at record speeds, instead of the lobster thermidor they were serving. At dinner parties he liked to say that he was a sex therapist, so that he didn’t have to talk about his work.

But he was very serious about that design work, and its implications.

In an interview with New York Social Diary in 2007, Mr. Easton said it was no longer appropriate to be building enormous houses.

“I’ve built all these Georgian houses, we’re talking about 15-to-25,000-square-foot houses,” he said. “Young people are not going to build that way. They still are up in Greenwich, but that’s the last blast. We can’t afford to. No, I think in the day and age when people are starving and dying, the earth can’t afford it.”