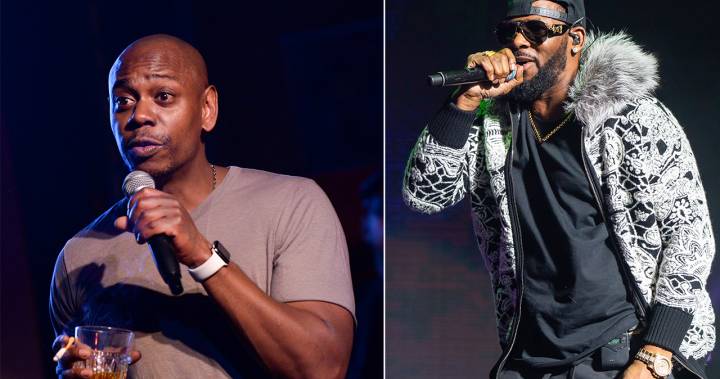 WARNING: This article contains sexual and explicit language and may be triggering for some readers. Please read at your own discretion.

Dave Chappelle claims that he was threatened by R. Kelly’s “goons” after making fun of the I Believe singer with the infamous ‘Piss on You‘ sketch.

The comedian recorded the 2003 skit for The Chappelle Show after Kelly was arrested in 2002 over the sex tape that allegedly saw him urinate on an underage girl.

The central piece of evidence in the trial was the videotape mailed to the Chicago Sun-Times in 2002.

The video in question led to a trial but Kelly and the girl denied it was them in the video.

Kelly was not charged with assault but he was charged with child pornography. Following a month-long trial in 2008, the singer was acquitted of all 14 charges.

Chappelle shared his experience with Kelly following the release of the recent Surviving R. Kelly, which saw many women level sexual misconduct claims against the singer.

The comedian spoke about it during a stand-up set in Hollywood earlier this week and he claimed that the skit resulted in him receiving direct threats.

“When that sketch came out, we was in Chicago at a Common show and his goons bust in my room — I don’t know if they was his goons, but they sure did like him,” the Half Baked actor said.

Chappelle went on to explain that he never actually met Kelly, but he joked that he’d been directly confronted by the singer.

On Jan. 18, Billboard reports that Sony and Kelly have agreed to part ways.

Billboard added that Kelly has been removed from the RCA website, and “reps for Sony and R. Kelly could not be immediately reached.”