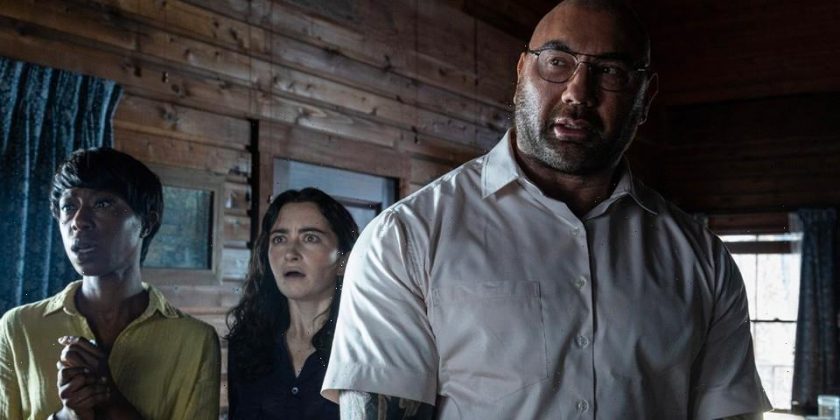 Universal Pictures has a dropped the first official trailer for the upcoming, highly-anticipated M. Night Shyamalan mystery horror film, Knock at the Cabin. The apocalyptic thriller is adapted from Paul Tremblay’s hit novel, The Cabin at the End of the World.

The trailer gives audiences a short glimpse of what to expect, revealing minute details that begin when they are introduced to a cabin in the middle of the woods. Cut off from the rest of the world, a family of two dads and their daughter decide to take a vacation together away from civilization. Fathers Andrew and Eric played by Jonathan Groff and Ben Aldridge do not waste time jumping into the lake with their daughter. Hoping to have a few moments of clarity and relaxation, the family’s peaceful trip is cut short when a group of strangers, named Redmond (Rupert Grint), Leonard (Dave Bautista), Sabrina (Abby Quinn) and Adriane (Nikki Amuka-Bird) show up knocking on the cabin door.

The strangers disturb the family’s vacation, breaking in and retraining them before telling the two dads that they have been chosen to make a very important decision that will change the course of the upcoming apocalypse. In order to prevent the world from ending, one of the family members need to be killed by the other and it is up to the family to decide who will be the one to die.

Watch the trailer above. Knock at the Cabin arrives in theaters on February 3, 2023.